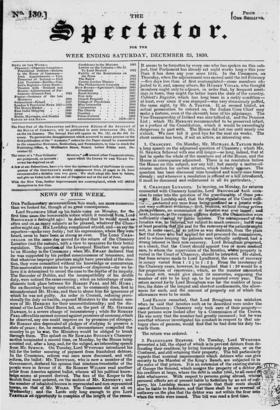 Page 1, 25 December 1830 — The First Part of the CORRECTED and EicitArtnEn Edition of
Close

The First Part of the CORRECTED and EicitArtnEn Edition of

the ANATOMT of the HOUSE of ConsioNs, will he published in next SPECTATOR (No. 131), on the let January. The Secood Part will appear in No. 132, on the 8th Ja- nuary. To prevent the disapPalatment which occurred to many persons on the firstpublication of the" Anatomy," orders for the Paper should be transmitted to the respective Newsmen, Booksellers, and Postmasters, in time to reach the Tublishing--Offite, 4, Wellington Street, Strand, before Friday next, De- cember 31,

The letter of a "Poor Collector Revenue," arillseveral other Communications,

are postponed, on account spate which the INDEX TO THE TRIRD VO- LvatE has deprived us of.

A few of our Subscribers, basics in view the Increased bulk of theVolame in conse- quence of the SencvATOrt's weekly enlargement from .16 pages to 24, have recommended a division into two parts.' We shall adopt this hint in future, and give an Index both at the end of December and at the end of June.

With. the New Year, farther improvements are contemplated, which will trafold themselves in due time.