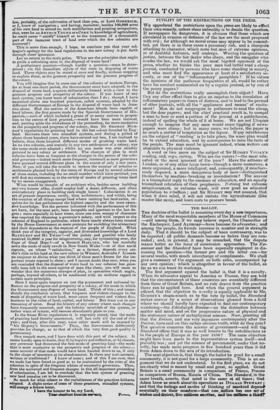 FUTILITY OF THE RESTRICTIONS ON THE PRESS.

Ws apprehend the restrictions upon the press are likely toeffect their own remedy, unless sheer imbecility is to decide the question. If newspapers be dangerous, it is obvious that those which are circulated in evasion or defiance of the law are the most pregnant with evil ; for although no moral crime may appear to be commit- ted, yet there is in these cases a pecuniary risk, and a disrepute attaching to character, which none but men of extreme opinions, or of doubtful fortunes, will undergo. Waiving the question of justice, between the fair dealer who obeys, and the smuggler who evades the law, we would ask the most bigoted opponent of the press, whether he thinks the poor man had better read a cheap journal, conducted by persons who have some standing in society, and who must find the appearance at least of a satisfactory se- curity, or one of the "inflammatory" pamphlets ? If he values the opinions of the pothouse frequenters at all, would he rather have his conduct commented on by a regular journal, or by one of the penny papers ?

But do the restrictions really accomplish their object? Have they any other effect than to give an impetus to the circulation of inflammatory papers in times of distress, and to lead to the perusal of other journals, with all the "appliances and means" of excite- ment? Men do not congregate in pothouses to read the cheap, but the dear papers ; and the chief practical result is, to compel a man to hear or read a portion of the journal at a publichouse, instead of spelling the whole of it at home. We are not Utopian enough to imagine that any man would cease tippling if news- papers were cheap ; but in many cases, we believe, the paper is as much a matter of temptation as the liquor. If any interference on the subject of "reading" is to take place, the wiser plan would be to extend education, and by consequence to raise the taste of the people. The man must be ignorant indeed, whom writers can stimulate to physical violence. • A word or two more on the subject of Sir HUSSEY VIVIAN'S. reading, and, ergo, rioting. Who are the rioters ?—the most edu- cated or the most ignorant of the poor ? Have the artisans of London, or of any other large town—though a more numerous, a more organized, a more intelligent, and, consequently, if mischiev- ously disposed, a more dangerous body of men—distinguished themselves by machine-breaking or incendiarism.? The answer is a triumphant reply to the enemies of education, and an equally triumphant refutation of their prophecies. Nothing but extreme misgovernment, or extreme want, will ever goad an educated population to rebellion ; and Sir HUSSEY may rest assured, that when it does rebel, it will not imitate the agriculturist (like master like man), and burn corn to procure bread.