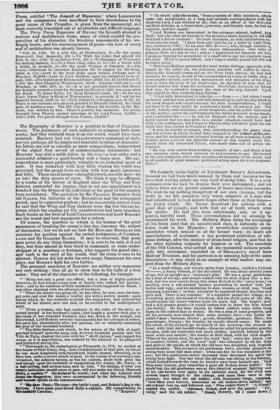 The Biography of RODNEY is a pendant to that of

COLLING- WOOD. The possessors of such materials as compose both these works, had they withheld them from the world, would have been criminal. RODNEY had not COLLINGWOOD'S command of style, nor yet, perhaps, all his simple and beautiful elevation of character: his letters are not so valuable as mere compositions, independent of the object they served of communicating information : but RODNEY was also a noble fellow in his way—a true sailor and a successful admiral—a good-hearted and a brave man. His cor- respondence is more particularly valuable in an historical point of view. It was remarked with how little wisdom the world was governed, but the people have no idea with how much ignorance and folly. These naval heroes—straightforward, sensible men—let us into the dirty secrets of state. We think it may be affirmed, by a reader of the history of England since the Whig and Tory factions contended for empire, that in not one appointment in a hundred has the fitness of the individual or the good of the country been considered. The quotation by Sir FRANCIS BURDETT from old RALPH, the historian of the Revolution and the subsequent period, may be somewhat profane ; but he was strictly correct when he said that the Whig and Tory factions were the two thieves be- tween which the country (or the constitution) had been crucified. Such books as the lives of Lord COLLINGWOOD and Lord RODNEY -are the truest and best arguments for a reform. • ; Of course, the question to whom is the honour of the great -manceuvre of breaking the enemy's line due, becomes the subject of discussion ; but we do not see how Sir HOWARD DOUGLAS can maintain his position against the united testimonies of CUMBER- LAND and Sir GILBERT BLANE. It may be observed, that great men never do any thing themselves : it is sure.to be said, it is not they, but their second or their third in command, or some under- strapper of a secretary or footman, who suggests the grand idea ; and such is the envy of the world, that the claim is sure to be allowed. DIBDIN did not write his own songs, SHERIDAN his own plays, nor RODNEY fight his own battles. The personal anecdotes of RODNEY are neither very numerous nor very striking : they all go to show him in the light of a true sailor: they are of the character of the following, for example.

"'Being not only a great sea-officer, but a man of highly-polished manners, he -had always young men of family who walked his quarter- deck ; and in his relations of little incidents which happened on board, I was often charmed with the effusions of his heart.

" • When his dinner was going aft, he has often, he says, seen the hun- gry mids cast over the dishes a wistful eye with a watery mouth: upon seeing which, he has instantly arrested the supporters, and ordered the whole of his dinner, save one dish, to be carried to the midshipmen's 'rness.

" • When a woman, who had, contrary to the rules of the navy, se- .creted herself in her husband's cabin,, and fought a quarter-deck gun in the-room of her wounded husband, who was down in the cockpit, was discovered, LordRodney severely reprimanded her for a breach of Orders, but gave.her, immediately after, ten guineas, for so valiantly sustaining the post of her wounded husband.

" ' The little bantam-cock which, in the action of the 12th of April, _perched himself upon the poop, and, at every broadside poured into the Ville de Paris, cheered the crew with his" shrill clarion," and clapped his wings, as if in approbation, was ordered by the Admiral to be pampered Itnd protected during life.

" • Previously to his embarkation at Plymouth, in 1779, he resided at the house of-Paul Ourry, Esq., then Commissioner of that p6rt, by whom be was most hospitably entertained and kindly treated, labouring, as he then was, under a severe attack of gout. In the course of an evening's con- -versation, the Admiral having, as was his custom, dwelt with great fise

• .and energy upon the certainty of vanquishing the enemy, Mr. Ourry, in .a haifaiesting, half-serious tune, said to him, "Sir- George, if what you• -vainly anticipate should come to pass, will you make my. friend, Hancock _Kelly, a captain ?" He declared he would ; and when the Admiral sent ahorae his desetches, they were accompanied by the following friendly

and laconic epistle to the commissioner : • 1" dear Paul—'Tis done—the battle's past, and Britain's Aag is vie-a -itorictus. I have made your friend Kelly a captain. My compliments to Alteentilthte Caroline. " Rotalsx?

"'In short,' adds the writer, • from a variety of little incidents, whictt cathe out accidentally, in a long and intimate correspondence with the departed Lord, I can venture to say, that, as an officer of the first-rate nautical abilities, as a benevolent, generous, and friendly man, he had no superior, and few equals.'

Lord Rodney was benevolent in the extreme—almost, indeed, atq,. fault; but. who shall set bounds to the generous heart, burning to aid aae/ befriend a fellow-creature ? On such occasions, no cold calculations en..

tered into his mind. I have been out,' said he (in a letter to Lady Rod- ney, written in 1782), to see poor Mrs. B—, who, though recover d, has been much pulled down by her severe indisposition. She talks of going to Bath in a day or two ; and as I apprehend her finances are low, I propose begging her acceptance of a small bill to pay her expenses upon the road. Moen cannot afford; and I hope a twenty-pound bill will not be taken amiss.'

" That Lord Rodney possessed the most tender feelings, especially With regard to the softer sex, the. following anecdote will suffice to show. During the Admiral's command on the West India station, he had had occasion to remark, in one of the commanders of a line-of-battle ship, a gross neglect of duty, and of the management and discipline of his ship; and, to mark the sense of his displeasure, he signified to him that he should remove him from the command. Previously, however, to taking that step, he resolved to inspect the state of the ship himself. Upon this subject he thus writes to Lady Rodney :

" • I had fully determined to take the — from —; but when I went on board, and saw two pretty and well-behaved girls, and the ship fitted in the most elegant and superb mariner for their accommodation, I could not bear to do what might be construed a harsh, ill-natured act. The youth, beauty, and innocence, of the daughters, and the polite behaviour of the mother, saved the just treatment the father deserved at my hands, and I permitted the -- to sail for England with the convoy; and I flatter myself that my dear girls, in a similar situation, would have met with a like indulgence, but I hope to Heaven they will never cross the sea while they live, except to France or Italy.' ' •

"It may he worthy of remark, that, notwithstanding a the ;many close and hot actions in which he had been engaged in the cotaseaaafabis•ser. vices, and his undaunted and intrepid bearing on all such occasions, Lord Rodney never received the slightest wound—in this respect more for- tunate than the renowned Nelson, who rarely came out of action un- touched.

" He was ever averse from holding councils of war ; and there is but one occasion upon record wherein he had recourse to one. He trusted to his own judgment, and to the energies and resources of his mind, and in all matters of great moment preferred acting upon his own responsi- bility."