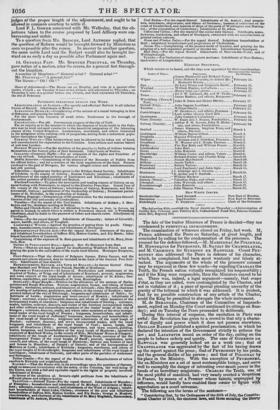 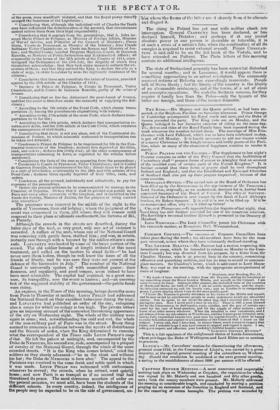 Page 4, 25 December 1830 — The fate of the traitor Ministers of France is decided—they
Close

The fate of the traitor Ministers of France is decided—they

are- condemned to PERPETUAL IMPRISONMENT.

Therexamination of witnesses closed on Friday, last week. M. PERSIL addressed the Peers on Saturday, at great length, and concluded by calling for the condemnation of the prisoners. The counsel for the defence followed,—M. MARTIGNAC for Fora ON-AC, M. HENNEQUIN for PEYRONNET, M. SAUZET for CHANTELAUZE, and M. CREMIEUX for GUERNON DE RANVILLE. Count PEY- RONNET also addressed the Peers in defence of his character, which, he complained, had been most wantonly and falsely at- tacked. The arguments of the whole of the prisoners' counsel- may be expressed in these few words—by expelling CHARLES the Tenth, the French nation virtually recognized his responsibility; and if the King were responsible, then the Ministers ceased to be so. There was, indeed, a legal argument—namely, that coupe ct eta, as they are called, were contemplated by the Charter, and not in violation of it ; a piece of special pleading unworthy of the gravity of the tribunal to which it was addressed. It is evident, that by no possible construction of any article of the Charter; could the King be permitted to abrogate the whole instrument. M. de BERANGER, Chairman of the Committee of Impeach- ment, replied on Monday (the Court contimied its sittings on Sun- day); and on Tuesday the Peers proceeded to deliberate. During this interval of suspense, the excitation in Paris was awful: the Revolution has given to a crowd in that city a charac- ter of dignity and power which it does not possess elsewhere. ODILLON BARROT published a spirited proclamation, in which he declared the intention of the Government strictly to enforce the law • and LAFAYETTE issued an order of the day, calling on the peope to behave orderly and quietly. The case of" GUERNON DE Railvir.LE was generally looked on as a weak one ; that of CHANTELAUZE was aggravated by the fact' of his having drawn up' the report against the press-; that of PEYRONNET by his pride, and the general dislike of his person ; and that of POLIGNAC by his place in the. Ministry. With the exception 'of PEYRONNET, the ex-Ministers are a set of most contemptible beings, and serve well to exemplify the danger of intrusting over-much power in the hands of an hereditary magistrate. CHARLES the Tenth, 'One, a the most- pitiful of mankind; had verynearly eretted'i'despbtisnt in France, by means of a Premier whose talents;-unpiopped ..by influence, woUld• hardly have enabled their (*Tier tO-flkure with approbation- as a coUrt newsman:------''

" Considering that, by the Ordinances of the 25th of July, the Constitu- tional Charter of 1814, the electoral laws, and, those securing the liberty

of the press, were manifestly violated, anti that the 'Royal power there* usurped the functions of the Legislature ; " Considering that, although • the individualswill of Charles the Tenth may have influenced the determination of the accused, that circumstance cannot relieve them from their legal- responsibility ;

"'Considering that it appears. frem the proceedings, that A. Jules Ar- mand Marie Prince de Polignac, as Minister of :Foreign Affairs, Minister of Warty/ interim, and President . of the Council of Ministers ; Pierre Denis, Comte de Peyronnet, as Minister of the Interior ; Jean Claude Balthazar Victor Chantelauze; as Garde des Sceaux and Minister of Jus- tice; and Martial Comte Annibal Perpetue Magdoire, Comte de Guernon Renville, as Minister of Public Instruction and Ecclesiastical Affairs ; all responsible in the terms of the 13th article of the Charter of 1814, coon- tersigned the Ordinances of the 25th July, the illegality of which they themselves acknowledge ; that they took every means to enforce the ex- ecution of them ; and that they advised the King to declare the city in a state of siege, in order to subdue by arms the legitimate resistance of the citizens ;

" Considering that no law has deterniinM the punishment of treastm, and that the court is therefore under the necessity of supplying the defi- ciency;

"According to the 'ith artiele of the Penal Code, which classes trans- portation (1) among the punishments stigmatizing with infamy ;

" According to the 17th article of the same Code, which declares trans- portation to be for life ; " According to the 18th article, which declares that transportation in- volves civil death, and the 25th article of the Code Civiler, which regulates the consequences of civil death ; - " Considering that there is not any place, out of the Continental do- minions of France, to which criminals sentenced to transportation can be taken and detained ; " Condemns le Prince de Polignac to be imprisoned for life in the Con- tinental dominions of the kingdom ; declares him deprived of his titles, rank, and orders ; declares him civilly (15a:1; all the other consequences of transportation remaining in force, as regulated by the articles before mentioned.

"Considering the facts of the case as appearing from the proceedings ; " Condemns le Comte de Peyronnet, Victor Chantelauze, and le Comte de Guernon Ranville, to imprisonment for life ; directs them to be placed in a state of inter.liction. conformably to the 28th and 29th articles of the Penal Code ; declares them equally deprived of their titles, rank, and orders.

" Condemns all the accused, individually and collectively, to pay the expenses of the proceedings.

Orders the present sentence to be communicated by message to the Chamber of Deputies. Orders that it shall be printed and posted up in Paris and every other commune of the kingdom, and transmitted to the Garde des Sceaux, Minister of Justice, for the purpose of being carried into execution."

The prisoners were removed in the middle of the night to the castle of Vincennes, their.old lodging; • where the judgment of the court was announced to them, aria where they will remain until . removed to their place of ultimate confinement, the fortress of Ha, on Picardy.

Although the crowds in the streets are described, during the latter days of the trial, as very great, only one act -of violence is recorded. A ruffian of the mob, whom one of the National Guard was removing with gentle force, stabbed him ; and waS,,:in return, instantly run through with a bayonet by the soldier-citiiens com- rade. LAFA.YETTE was hooted by some of the baser portion, of the crowd. The old soldier became at length irritated at this novel treatment, and called on the hooters to stand forth" he had never seen them before, though he well knew the faces of all the friends of liberty, and he was sure they were not present at the defence of the barricades in July." The conduct of the National Guard is universally spoken of with unmodified praise : their firmness, and regularity, and good temper, seem indeed. to have been most admirable. The capital had regained, in a great mea- sure, its tranquillity, now the worst is known ; and—an unerring test of the supposed stability of the government—the public funds were rising. An express, in the Times of this morning, brings down the news from Paris to Thursday at midday. Louis PHILIPhad addressed the National Guard on their excellent-behaviour during the trial; and LAFAYETTE had published an. order of the day, eulogizing also a corps fir which no eulogy is too high. The private letters give an imposing account of the somewhat threatening appearance- of the city on Wednesday night. The whole of the military were, again in arms ; and, notwithstanding the cold and wet, the whole' of the non-military part of Paris was in the street. Every thing seemed to announce a collision between the asreids of. disturbance and the friends of order, when the Kinc, determined to execute,' what the correspondent of the Times calls Louis PH/LIP'S coup (1' etat. He left the palace at midnight, and, accompanied by the

Duke de NEMOURS, his second son, rode, accompanied by a picquet of cavalry of the National Guard, through the whole of the more crowded streets. "It is the King who comes behind," cried the

soldiers as they slowly advanced—" he in the cloak and without his hat ; the Duke de Nemourts is -here also." The appeal to the Parisians was received in the same frank and noble spirit in which it was made. Louis PHILIP was welcomed with enthusiasm wherever he moved ; the crowds,- when he retired, went quietly home ; and now Paris is as tranquil as if no second trial had- threatened its peace. The most strenuous asserters of order on the' presentoccasion, we must add, have been the students of the different :schools. In every country, indeed, . the intelligence of the people may be expected to be on the side of government, un-