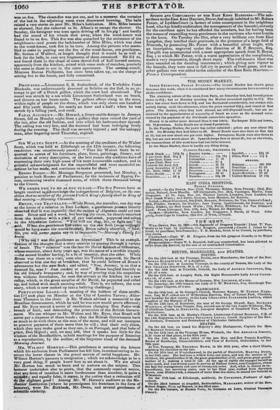 . : to accept of his furniture, plate, linen, paintings,

library, and curiosities , resolution was unanimously passed : "That Sir Walter Scott be re-

queStScott, which was held at Edinburgh on the 17th instant, the followinges SIR WA LTII: a Sc o:r T.—At the meeting of the creditors of Sir Walter , curiosities of every description, as the best means the creditors have of I:. expressing their very high sense of his most honourable conduct, and in 1 " grateful acknowledgment for the unparalleled and most successful ex- i...:,,..ertions he has made, and continues to make for them."

• [why aro was tliegentleinan an Abyssinian? " This is an exeMpli- cation. of the Changes that a story receives by passing through`a variety of heath. The " relation" was the late Sir DavidAinioehof,Gffiniitten, whosamansiori, about forty years ago, was the scenenf'a terrible tragedy !.. —the second•brotiter having, in a fit of insanity, shot the elder. • While

- Bruce was there mitt visit; sobn after his Travels appeared, Sir David

• observed to him one day at breakfast, that he could believe all Bruce's adventures but the.zawliesh; and added, "Noe, Jemmy; is na that a damned lie, man Just confess at ance:" Bruce laughed heartily at his old friend's brusguerie ; and, by Way of proving that his scepticism was without foundation, he sent thd servant to the kitchen for a raw Collor, which, to the great surprise of Sir David, he peppered and rolled up, and bolted with much seeming relish. This is we believe, the true story, which is now cooked up into a bullying challenge.] ' PORTUGUESE •LoANs.—A meeting of the holders of these siceri.: ties [ ? ]. took place on Monday at the City of London Tavern ; Alder- man Thomson in the chair._ A Mr. Walton advised a memorial to the .Brazilian Government„whichhe said he was sure would prove effectual; . and Mr. Eyre moved a series Of resolutions charging Don Pedro with

• ,breach of faith, and demanding the protection of the British Govern-.

We can whisper to Mr. Walton and Mr. Eyre, that Brazil. will - ,.; never pay a sixpence of these bonds ; that the British Government. have . as much to do with them as the man of the moon, and will not interpose

to procure payment of them more than he will ; that their only claim,

• which they may make good as they can, is on Portugal, and that 'babe of

Thrice, Don Miguel ; and„ we may add, that it speaks but little far the wisdom of the Bondholders, tehold meetings for the purpose of listening to a reproduction by the anther, of the forgotten trash of the deceased 'Morning Journal: • MR. WILMOT Hourost.—This gentleman is amusing the leisure which his exclusion from Parliament has left him, in endeavouring to in- struct the lower classes in the grand secrets of social happiness. Mr. Wilmot .Horton's• panacea is emigration ;_ which we acknowledge to be a " very good thing, if people knew how to set about it. We are afraid Mr,Borton has much to learn and to unlearn on the subject. This lecturer undertakes also to proie, that the commonly received notion, that any form of taxation is More burdensome than, another; is'quite a mistake; and equally false, it seems, is the notion that a. reduction will de the slightest good ! . Among ;Mr.. W. Horton's auditors at the Me- Institittion (where he promulgates his doctrines in the form of "leetures); *ere. Dr. Sirkbeck, Mr. Owen, and several gentlemen of scientific celebrity. EPPING Foussr.—Mr. Montagu Burgoyne presented, last Monday, a petition to both Houses of Parliament, for the inclosure of Epping Fo- rest, containing twelve thousand acres,.of which three thousand belong . : to"the Crown.

si E ORDER. von: TO Do AS NOG rta:ssE.—The five Powers have at length resolved, to acknowledge the indepondence of Belgium, on the con-

dition that no member of the present French King's family shall be King of that country:—Morning Chronicle. . . . - - , •

SPORTS AND COMPLIMENTS OF THE EAST KENT Hinmens.—The sub- scribers to the East Kent Harriers, Dover, feel much indebted to Mr. Robert Potter, of LyddenCourt (a farmer of some consequence in the neighbour hood, who has kindlyundertaken the management of the hounds),notonly for the excellent sport he has afforded the members, but for having been the means of reconciling many gentlemen in the environs who were hostile to the hunt, On Tuesday the 21st, after a very brilliant run from Elsa Langdon, they testified their gratitude in the presence of a large field. of .Nimrods, by presenting Mr. Potter with a beautiful silver bugle, with an inscription, engraved under the direction of H. P. Bruyers, Esq. The gift was accompanied with a most appropriate speech from Ii. Joyce, te which Mr. Potter, with a warm appreciation of the compliment, made a very impressive, though short reply. The well-known blast was then sounded on the dazzling instrument ; which giving new vigour to the hounds*, they were soon in full Cry in pursuit of fresh game, and an- other gallant run was added to the calendar of the East Kent Harriers;— From a Correspondent.