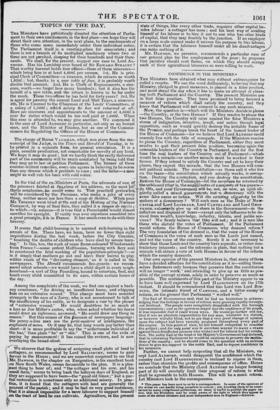 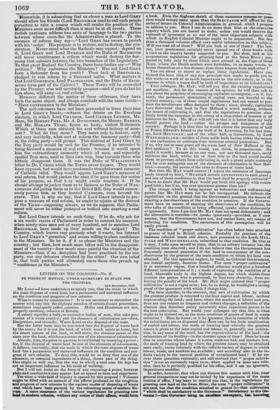 CONFIDENCE IN THE MINISTERS.* . .

THE Ministers have obtained what may without extravagance be called a respite. We use the, word delibeeately, believing that any Ministry,pledssed to good measures, is placed- in a false position, and must dread the day whenit has to make an atteinpt at pleas- ing both Parliament and the Country. The present Ministers are in that false position. They have promised to bring forward a measure of reform which shall satisfy the , country, and they know that Parliament will not consent to any such measure. --Now, the question is—which will the. Ministers decide to please —the Country, or the two. Houses ?. If they resolve to please the two Houses, the Country will raise against the false Ministers a storm -of indignation, invective,. insult, and active though legal opposition; such as would quickly destroy the irritable frame of the Premier, and perhaps break the heart of the honest leader of the House of Commons—for we believe that Lord AT:THORP could scarcely live with the title of renegade. If the Ministers resolve to.please the Country, regardless of Parliament, either they must resolve to quit their present false position, becoming again the ostensible leaders of the Countiar in Parliament, and for the first time the real leaders of the Country out of .Parliament-7whieh would be a.miracle—or another miracle intik be worked in their favour. If they intend to satisfy the Country and yet to keep their places, they expect this miracle, that . the, two Houses will com- mit political-snicide, The constitution—as those call it who' live on the taxes—the constitution which actually works, is comp- tione, Destroy the corriiption, and you destroy the constitution. . Reforinthe House. of Comnnqs..4-.:Iet the x-nerabershe returned by the unbiassed (that is, the seasetiaotes of amajority of tax-payers- !des this, and your, Ooviarnment will. be not, -afteansiv, an. ()lied oli- gercliYealled a mixed -governnientv butea -dbritekracy with the same false name as before. Will the existing oligarchy be the makers of a democracy Will such Men as the Duke of NEw- AS7144,and:Lord LONSD ALE, Lord C LEVE L AND and Lord, GROS - vtNorievoluhtirily give up all share in the Government—in the infliction and tdisposal of taxes—except only the influence to be de- rived from Wealth, knOwledge, industry, talents, and public -ser- vices? 'We firmly believe that .04 will not; and it ismen like these who dictate the votes of, Parliament. If the 'Parliament would reform the House of Commons 'why demand reform ? The very foundation of the demand is, that the voice of the House of Commons is the voice of such men as the 'Lords just named, and not the voice of the country. Surely it is not necessary to show that those Lords and the country have separate, or rather con- tradictory interests; and the inference is plain, that nothing but a miracle will obtain a vote of both Houses in favour of the reform which the country demands.

Our own opinion of the present Ministers is, that many of them have a decided affection for the constitution as it is—calling them- selves Reformers only because they perceive that the constitution will no longer "work" and intending to give up as little as pos- sible of the corrupt system, solely in order to preserve as mochas possible. The sentiments of this .part of the Ministry appear to -us to have been well expressed by Lord HA.DDINGTON on the 17th 'instant. It should be remembered that this Lord was Lord Bfet- Z./LNG, the intimate friend of CANNING, and a bitter enemy-of reform, on the ground that Parliament" worked well."

The Earl of HADDINGTON said; that he had no hesitation in .acknow- !edging that the feelings in favour of reform were growing rapidly through- out Scotland. The people were completely dissatisfied with the borough representation ; and as the system no longer had the confidence of the people, it was impossible that it could WORK WELL. He would go farther and say, that it was an absolute impossibility for any. man, whatever his station, or however wilfully blind, not to see that a very great change of opinion upon the subject had been recently produced throughout every part of the empire. In this point of view, he felt himself compellqd to consider the subject; and the only point was to ascertain ViNSRE TO MAKE A STAND againstthose disaffected persons whoWished not for reform but for reveln- tion. The noble Earlid-. the head of his Majesty's Goverimient had declared, that in reforming Parliament he would be cautious to presenie the instittt tions of the country; and he should come to the question with an anxious desire to give his support to the noble Earl, and to repose confidence Ia

Further, we cannot help suspecting that all the Ministers, ex- cept Lord ALTHORP, would disappoint the confidence which the country (not Lord H ADDINGTON) is inclined to repose in them, rather than abandon the profits and consequence of office. Hence we conclude that the Ministry (Lord ALTHORP no longer forming part of it) will carefully limit their proposal of reform to what shall be agreeable to both Houses. This will be a mock reform. Let Ministers look to the consequences.

• This paper has been sent to us by a correspondent. In some of the opinions of the writer we can hardly bring ourselves to concur; yet, knowing them to be enter- - tained by many enlightened politicians, we deem it useful to publish the paper en- tire, that the Ministers may be made aware of the light in which they appear to some of the ablest thinkers anti most independent men in England.—Enixon. 1Meanwhile, it is astonishing that so clever a man as Lord Glom should allow his friends (Lord BROUGHAM used to call such people parasites) to take a course which will render the position of the Ministers even more difficult than it must be at all events. These foolish partisans address two sorts of language to the two parties between whose cross-fire the Administration is placed. To the enemies of reform they say—" Lord GREY has sworn to perish with his order.' His purpose is to restore, not to destroy, the con- stitution. Never mind what the Radicals may expect: depend on it, Lord GREY and Lord DURHAM and the Duke of RICHMOND will never countenance a reform which would destroy the har- mony that subsists between the two branches of the Legislature." To that great Radical the Country, these busy-bodies say—" Why petition ? Why embarrass the Ministers ? Has not Lord GREY been a Reformer from his youth ? Then look at BROUGHAM, pledged to real reform by a thousand oaths. What matters it that Lord GODERICH, Lord PALMERSTON, and the Duke of RICH- moND form part of the Cabinet ? Those Tories will be overruled by the Premier, who will inevitably propose—and, if you do but let him alone, will carry—a real reform." However different the matter of these addresses, they have both the same object, and always conclude with the same words— "Have CONFIDENCE in the Ministers."

The anti-reformers have not been persuaded to leave their case in Lord GREY'S hands,—witness the debate on the Evesham election, in which Lord CHANDOS, Lord GEORGE LENNOX, Mr. Ross, Sir ROBERT PEEL, Mr. A. DUNCOMBEt the Messrs. BANKES, and Mr. HORACE TWISS, figure as hasty, violent Reformers. Which of these men obtained his seat without bribery of some sort? What do they mean? They mean only to declare, early and very decidedly, what sort of reform the harmony party—that is, the ruling party—will permit. This distrust of Lord GREY by the Tory patty would be well for the Premier, if he intended to bring forward a measure of real reform ; because it would spare him the extraordinary animosity which all men, and especially spoiled Tory men, used to their own way, bear towards those who bitterly disappoint them. It was the Duke of WELLINGTON'S letter to Dr. CURTIS which the Tories never forgave. They would have opposed, but would have pardoned a straightforward measure of Catholic relief. They would oppose Lord GREY'S measure of real reform, but would pardon the man if he gave them fair notice of his purpose, so that ti;ey might easily frustrate it. If he should attempt to jockey them as to Reform, as the Duke of WEL- LINGTON did jockey them as to the Relief Bill, they would rancor- ously pursue him, as they hunted CANNING, even beyond his grave. This is why we say, that if Lord GREY intends to pro- pose a measure of real reform, he ought to rejoice at the distrust of the Tories—supposing always, as we do suppose, that Parlia- ment will never be either jockeyed or bullied into enacting a real reform.

But Lord GREY intends no such thing. If he do, why ask for a six weeks' recess of Parliament in order to concoct his measure, when ninety-nine men out of every hundred, not to mention Lord IlsouoHam, have made up their minds on the subject? The Country, which knows very precisely what it wants, has listened to Lord GREY'S "parasites," and seems willing to place confidence m the Ministers. So be it, if it so please the Ministers and the country ; but then, how much more bitter will be the disappoint- ment of the country—how much more painful the situation of the Ministers—than if no deception had been practised by the one party, nor any delusion cherished by the other! Our own belief IS, that both parties will ultimately curse those who preach up "confidence in the Ministers."