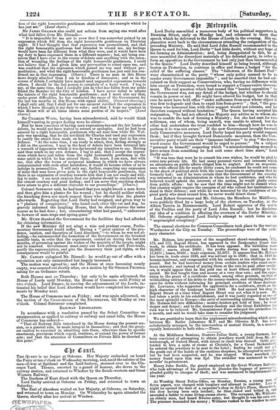 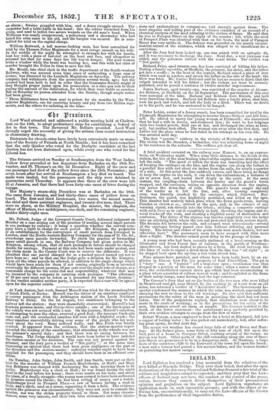 Lord Derby assembled a numerous body of his political supporters in Downing Street, early on Monday last, and rehearsed to them that speech which he delivered to the House of Lords in the evening. His ex- planation went back to the circumstances attending the resignation of the preceding Ministry. He said that Lord John Russell recommended to the Queen to send for him, Lord Derby "had little doubt, without any hope of his forming an Administration ; and, being disappointed in this, he at once assembled the discordant materials of his defeated party, in order to form an opposition to the Government he had only just then recommended to the Queen." Lord Derby described himself as being bound, although beaten on Protection, to continue in office and frame a budget "for the relief of the Buffering classes." The "followers of Sir Robert Peel" were characterized as the party "whose only policy seemed to be to render every Government impossible " ; and he asserted that he had cal- culated on their support as Conservatives, who, having no difference with him except on Protection, were bound to support a Conservative Govern- ment. The real question which had caused this "banded opposition" to the Government was, not any detail of the budget, but whether he should remain in power or not. He might have altered his budget, but in that case he must have held office "under sufferance from men whose object it was first to degrade and then to expel him from power " ; that, "the gen- tlemen who honoured him with their support would not tolerate, and he therefore resigned without hesitation." The Queen having accepted his resignation, "he had not offered her Majesty any advice as to whom she was to confide the task of forming a Ministry; but she had sent for two noblemen, one of whom, being unwell, was unable to attend, but the other had undertaken the trust confided to him—though how he was to perform it he was not aware." If the new Government brought forward truly Conservative measures, Lord Derby hoped his party would support them ; but if they brought forward Democratic measures, then the Con- servative party would use their "immense influence" to stop "the down- ward course the Government would be urged to pursue." On a subject "personal to himself," respecting which a misunderstanding seemed to have arisen from something he had said some short time since," Lord Derby said—

"It was true that were he to consult his own wishes, he would be glad to retire into private life. He had many personal views and interests which an attendance on public affairs obliged him to neglect. After an acquaint- ance with official life for nearly thirty years, he confessed he could not come to the shock of political strife with the same freshness or enthusiasm that he formerly had ; and if he were certain that the Government of the country was intrusted to an Administration in whom he had confidence, and who he believed would uphold the interests of the nation, he would gladly retire from public affairs : but he saw that the time might not be distant when this country might require the energies of all who valued her institutions to stand in their defence; and while he was honoured by the confidence of the great party who stood around him, he never would desert them."

Lord Robert Grosvenor and Mr. Osborne, the Members for Middlesex, were publicly feted by a large body of the electors, on Tuesday, at the Albion Tavern in Hammersmith. Lord Robert approves of the union of the Peelites and the party of Lord John Russell ; but he disclaims any idea of a coalition in effecting the overturn of the Derby Ministry. Mr. Osborne stigmatized Lord Derby's attempt to catch votes as an "unprincipled conspiracy."

The annual elections for Common Councilmen took place in the various Wardmotes of the City on Tuesday. The proceedings were of the ordi- nary character.

Mr. Holmes, late proprietor of the magnificent shawl-warehouses, 171, 173, and 175, Regent Street, has appeared in the Bankruptcy Court this week, to obtain his certificate. It has been opposed. His liabilities were 26,0891.; assets, about 35001.; the profits during four years had been 17,8471.; losses, 66461.; trade expenses, 22,4971. It appears that Mr. Holmes has been in trade since 1830, and was solvent up to 1848; that in 1848 he became insolvent, and compounded with his creditors at ten shillings in the pound. But he had borrowed money from certain lenders who exact enor- mous interest ; and instead of paying them at the rate he paid other credit- ors, it would appear that he has paid one at least fifteen shillings in the pound. He had bought time and money at a very dear rate ; and the oppo- sition to the grant of a certificate rested, among other grounds, on that of withholding entries of his debts to the money-lenders, and obtaining forbear- ance for debts without informing his principal creditors of those dealiogs. Mr. Lawrence, who supported the application for a certificate, dwelt on the high character of the bankrupt before 1848. He had opened his shop in Regent Street at a time when Regent Street was not what it is now. 14e had taken a pride in his establishment, and it was justly regarded as one of the most splendid in Europe—the envy of surrounding nations. But in 1848 Mr. Holmes fell into difficulties ; money-lenders got hold of him ; he went deeper and deeper; and to the money-lenders and the Great Exhibition his ruin was to be referred. Mr. Commissioner Fane enlarged the protection for a month, and said he would take time to consider his judgment.

We are gratified to learn that the unpleasant misunderstanding which arose between Mr. Butler Johnstone M. P. and Mr. Oliveira M. P. has been satisfactorily arranged, by the intervention of mutual friends, in a manner equally honourable to both aides.—Times.

At the Middlesex Sessions, Gustave Julius Getti, a young German, has been convicted of attempting to obtain jewellery worth 2451. from Mr. At- tenborough, of Oxford Street, with intent to cheat him thereof. Getti pre- tended to hire a suite of rooms at Christie's, for a Count Beckendorff; he ordered the jewellery to be sent to the hotel ; finding be could not get the goods out of the hands of the cautious shopman, he attempted to retreat ; but he had been suspected, and he was stopped. When searched, the money found upon him was 21-d. The swindler was sentenced to eight months' imprisonment. Henry John Buckle, the guard employed on the Great Western Railway, who took advantage of his position to plunder the luggage of passengers, pleaded guilty to charges of theft; and was sentenced to imprisonment for one year.

At Worship Street Police Office, on Monday, Swains, a young man of fierce aspect, was charged with burglary and attempt to murder. Late at night he opened the door of a carpenter's shop in Byde's Plaoe, Shorediteh, the door having been only latched; he then closed and bolted ft, pad ascended a ladder to some living-rooms above. The occupant, Mr. Williams, an elderly man, had heard Swaine enter but thought it was his own son. The prisoner demanded his money ; Williams rushed to the window to tato

an alarm ; Swaine grappled with hiro, and a fierce struggle ensued. The carpenter had a table-lmife in his hand ; this the robber wrenched from his grasp, and used to inflict two severe wounds on the old man's head. When Williams was nearly overpowered, a policeman and a shoemaker who had heard his cries came to his aid, and the burglar was secured. He is com- mitted for trial on the capital charge.

William Bedward, a tall morose-looking man, has been committed for trial by the Thames Police Magistrate for a most savage assault on his wife. In the middle of the night he attempted to strangle her with his hands, beat her with a piece of bed-rail on the head and face, and altogether so misused her that for sonic days her life was in danger. The poor woman broke a window while the brute was beating her, and this with her cries of murder brought the Police in time to save her life.

Mr. Mould, late chief clerk in the traffic department of the South-western Railway, who was accused some time since of embezzling a large sum of money, was liberated by the Lambeth Magistrate on Saturday. The railway company had withdrawn from the prosecution several weeks ago ; but the accused had been held to bail in order that the Guarantee Society might if they thought proper insist upon his prosecution as a sine qua non to their paying the amount of the defalcation, for which they were liable as sureties. But on Saturday no person attended from the Society, though ample notice had been given.

Three Militiamen have been sent to prison for six months by the West- minster Magistrate, one for receiving bounty and pay from two Militia regi- ments, and the others for enlisting in the Line.