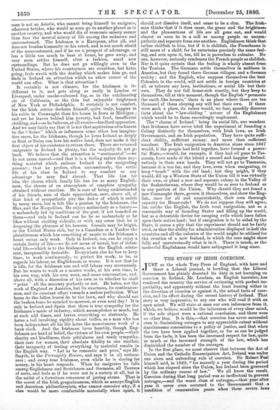 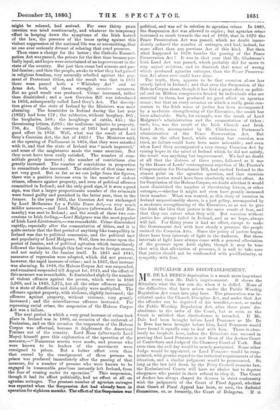 THE STORY OF IRISH COERCION.

JUST as the whole Tory Press of England, with here and there a Liberal journal, is howling that the Liberal Government has plainly deserted its duty in not hurrying on coercion in Ireland, Mr. Leadam, an English barrister, has rendered the country the service of reviewing with perfect im- partiality, and apparently without the least leaning either in the direction of coercion or against it, the actual facts of coer- cion, and its effect during the recent history of Ireland. That story is very impressive, to any one who will read it with an open mind. We will state at once our own inferences from it, which, we believe, would be the inferences of every clear mind, if the sole object were a rational conclusion, and there were no other bias. It is this,—that coercion has never succeeded even in diminishing outrages to any appreciable extent without simultaneous concessions to a policy of justice, and that when the two have been applied together, so far as can be judged from the facts, it has been the increased respect for law, quite as much as the increased strength of the law, which has diminished the number of the outrages.

In the first place we must observe that between the Act of Union and the Catholic Emancipation Act, Ireland was under one stern and unbending rule of coercion. Sir Robert`Peel himself said, in 1829, "for scarcely a year during the period which has elapsed since the Union, has Ireland been governed by the ordinary course of law." We all know the result. Coercion during that long period was so ineffectual to prevent outrages,—and the worst class of outrages,—that • year after year it never even occurred to the Government that a condition of comparative peace when these severe laws

might be relaxed, had arrived. For over thirty years coercion was tried continuously, and whatever its temporary effect in keeping down the symptoms of the Irish hatred of the law, the pressure of the tense spring against this violent suppression of the national life was so unremitting, that no one ever seriously dreamt of relaxing that cruel pressure.

Then came a change for the better ; the Catholic Emanci- pation Act was passed, the priests for the first time became par- tially loyal, and hopes were entertained of an improvement in the state of the country. But just then came bad seasons and par- tial famine; and then the people awake to what they had gained in religious freedom, very naturally rebelled against the pay- ment of Protestant tithes, and the result was that in 1831 there were passed both a " Whiteboy Act" and an Arms Act, both of them strongly coercive measures. But no good result was produced. Crime increased, rather than diminished ; and a new Coercion Bill was introduced in 1833, subsequently called Lord Grey's Act. The descrip- tion given of the state of Ireland by the Ministers was most alarming. The homicides in Ireland during the last year (1832) had been 172; the robberies, without burglary, 465; the burglaries, 568; the houghings of cattle, 455; the threatening letters, 2,095; the malicious injuries to property, 796, &c. Clearly, the coercion of 1831 had produced no good effect in 1832. Well, what was the result of Lord Grey's Coercion Act, the Act of 1833? The Ministers said, at the opening of Parliament in 1834, that they were satisfied with it, and that the state of Ireland was "much improved," and some of the magistrates made the same assertion. But they must have been easily satisfied. The number of com- mittals greatly increased ; the number of convictions also greatly increased. The number of convictions in proportion to committals also increased. The statistics of that time were not very good. But so far as we can judge from the figures,

there was a positive increase even in the number of violent crimes, offences against property, and even of political offences committed in Ireland; and the only good sign, if it were a good sign, was that a larger proportionate number of the criminals were found guilty and punished in the latter year, than in the former. In the year 1835, the Coercion Act was exchanged by Lord Melbourne for a Public Peace Act,—a very much milder measure,—and Lord Mulgrave (afterwards Lord Nor-

manby) was sent to Ireland ; and the result of these two con- cessions to Irish feeling,—Lord Mulgrave was the most popular of Irish Lord-Lieutenants,.—was remarkable. Crime diminished rapidly, especially after the commutation of tithes, and it is quite certain that the first period of anything like tranquillity in Ireland was due to political concession, and the political tact and popularity of Lord Mulgrave. Well, then we come upon the period of famine, and of political agitation which immediately followed the famine, though this last was due to foreign causes, and not mainly to the famine itself. In 1845 and 1846, measures of repression were adopted, which did not prevent, however, the rapid increase of crime ; and in 1847, that increase was alarming. In 1848, the Habeas Corpus Act was suspended, and remained suspended till August 1st, 1849, and the effect of this measure was remarkable. It diminished slightly the number of violent offences against the person, which were in 1848 5,966, and in 1849, 5,275, but all the other offences peculiar to a state of disaffection and disloyalty were multiplied. The offences against property, with violence, slightly increased ; the offences against property, without violence, very greatly increased ; and the miscellaneous offences increased. For repressing social crime, the suspension of the Habeas Corpus Act was a failure.

The next period in which a very great increase of crime took place in Ireland was in 1866, on occasion of the outbreak of Fenianism, and on this occasion the suspension of the Habeas Corpus was effectual, because it frightened the American Fenians out of the country. Lord Naas (afterwards Lord Mayo) himself gave this explanation of the operation of the measure,—" Numerous arrests were made, and persons who were known to be leaders of the movement were consigned to prison. But a better effect even than that caused by the consignment of these persons to prison was produced immediately after the passing of that measure, for a number of persons who were known to be engaged in treasonable practices instantly left Ireland, from the fear of coming under its operation." This suspension, though it had its effect politically, had no effect at all on agrarian outrages. The greatest number of agrarian outrages was reported when the Suspension Act bad already been in operation for eighteen mozths. The effect of the Suspension was political, and was nil in relation to agrarian crime. In 1869, the Suspension Act was allowed to expire ; but agrarian crime increased so much towards the end of 1869, that in 1870 the Peace Preservation Act was passed, which no doubt imme- diately reduced the number of outrages, and had; indeed, far more effect than any previous Act of this kind. But then what happened in 1870, besides the passing of the Peace Preservation Act? It was in that year that Mr. Gladstone's Irish Land Act was passed, which probably did far more to stop unjust eviction, and to diminish that sense of wrong which produced agrarian outrages, than the Peace Preserva- tion Act alone ever could have done.

The truth, then, appears to be that coercion alone has utterly failed in Ireland ; and that even the Suspension of the Habeas Corpus alone, though it has had a great effect on politi- cal and on Ribbon conspiracies headed by individuals who are essential to them, has produced no good effect on agrarian crime ; but that on every occasion on which a really great con- cession to the Irish sense of justice has been accompanied by a moderate strengthening of the Executive, the result has been admirable. Such, for example, was the result of Lord Mulgrave's administration and the commutation of tithes ; such, too, was the result of the Irish Church and Irish Land Acts, accompanied by Mr. Chichester Forteseue's administration of the Peace Preservation Act. But then, on the other hand, while nothing but coercion was tried, no failure could have been more miserable ; and even when Lord Grey accompanied a very strong Coercion Act by raising hopes in the mind of Ireland which he did not satisfy, the result was anything but improvement. We feel no doubt at all that the distress of three years, followed as it was by the House of Lords' contemptuous rejection of Mr. Forster's Compensation for Disturbance Bill, had excited Ireland to the utmost point on the agrarian question, and that coercion without justice would have been absolutely without effect. As for Suspension of the Habeas Corpus, we doubt whether it would have diminished the number of threatening letters, or other outrages,—whether it might not even have greatly increased their number. What was wanted, as this story of coercion in Ireland unquestionably shows, is a just policy, accompanied by a moderate strengthening of the Executive, so as not to give the Irish the idea that justice is the mere result of fear, and that they can extort what they will. But coercion without justice has always failed in Ireland, and as we hope, always will fail. For thirty years it had no effect, except to make the Government feel with how steady a pressure the people resisted the Coercion Acts. Since the policy of justice began, there have been intervals of light in the darkness. But these intervals of light have always come with a general alleviation of the pressure upon Irish rights, though it may be true that with that alleviation of pressure, it is well to take care that justice should not be confounded with pusillanimity, or sympathy with fear.