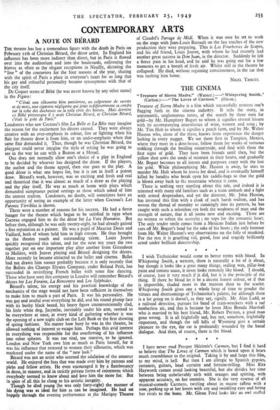 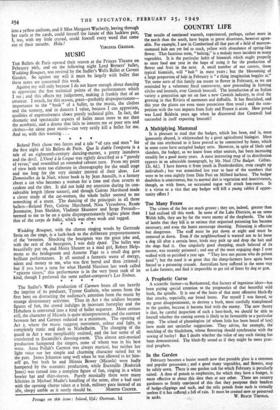 "Treasure of Sierra Madre." (Warner.)—" Whispering Smith.' (Carlton.)—" The Loves of Carmen." (Odeon.) Treasure of Sierra Madre is a film which successfully restores one's flagging faith in the cinema industry. It tells the story, in unromantic, unglamorous terms, of the search by three men for gold—by Mr. Humphrey Bogart to whom it signifies eternal leisure with its accompanying anaesthetics of wine, women and song ; by Mr. Tim Holt to whom it signifies a peach farm, and by Mr. Walter Huston who, alone of the three, knows from experience the danger lurking in every nugget. We see them first in Tampico, Mexico, where they meet in a doss-house, follow them for weeks of tortuous trekking through the broiling countryside, and find with them the first signs of gold. They have been friends until then, but the yellow dust sows the seeds of mistrust in their hearts, and gradually Mr. Bogart becomes to all intents and purposes crazy with the lust for gold. While philosophising Mr. Huston is away, he tries to murder Mr. Holt whom he leaves for dead, and is eventually himself killed by bandits who break open his saddle-bags so that the gold is blown away back to the mountains whence it came.

There is nothing very startling about this tale, and indeed it is trimmed with many old familiars such as a train ambush and a fight with armed desperadoes, and yet the director, Mr. John Huston, has invested this film with a cloak of such harsh realism, and has woven the thread of morality so cunningly into its pattern, he has caught with such a relentless eye both the weakness of man and the strength of nature, that it all seems new and exciting. There are no women to soften the austerity ; no sops for the romantic heart. The only tender smile comes from a Mexican Indian just before he cuts off Mr. Bogart's head for the sake of his boots ; the only humour from Mr. Walter Huston's wry observations on the folly of mankind. For the rest it is gruelling toil, greed, fear and tragedy brilliantly acted under brilliant directorship.

I wish Technicolor would come to better terms with blood. In Whispering Smith, a western, there is naturally a lot of it about, but though it looks like a great many things, sealing wax, pillar-box paint and tomato sauce, it never looks remotely like blood. I should, of course, hate it very much if it did, but it is the principle of the thing. If there be blood let it be a decent honest colour, or if that is impossible, shaded more to the maroon than to the scarlet. Whispering Smith gives one a whole heap of time to ponder the virtues and shortcomings of Technicolor's palette, for although there is a lot going on it doesn't, as they say, signify. Mr. Alan Ladd, as a railroad detective, pursues his band of train-wreckers with a sad motherless air, and this is because he loves Miss Brenda Marshall who is married to his best friend, Mr. Robert Preston, a good man gone wrong. It is all frightfully sad, but not, somehow, frightfully important, and though the tall hills of Wyoming give a certain pleasure to the eye, the ear is profoundly wounded by the banal dialogue. And then, of course, there is the blood.

I have never read Prosper Merimee's Carmen, but I find it hard to believe that The Loves of Carmen which is based upon it bears much resemblance to the original. Taking it by and large this film, to my mind, is hell. But then I am allergic to Spanish gypsies, castanets, guitars, bead curtains and fortune-telling. Miss Rita Hayworth cannot avoid looking beautiful, but she divides her time between being unbelievably arch with oranges and spitting, with apparent accuracy, on her enemies. She is the very essence of all musical-comedy Carmens, twirling about in mauve taffeta with a rose, peeking up at her lovers with coy and twinkling eyes and biting her rivals to the bone. Mr. Glenn Ford looks like an owl stuffed

into a yellow uniform, and if Miss Margaret Wycherly, leering through her curls at the cards, could foretell the future of this luckless pair, I, too, with my little crystal, could foretell every word that came out of their mouths. Hola !