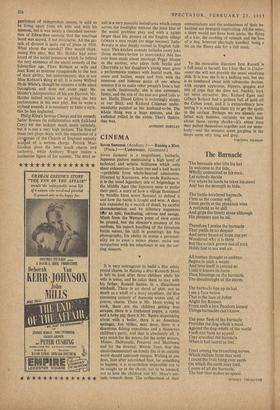 Seven Samurai. (Academy.)—Raising a Riot. (Plaza.)—Underwater. (Gaumont.) Seven Samurai is a magnificent, barbaric, Japanese picture maintaining a high level of technical and artistic brilliance which only sheer exhaustion—it lasts two and a half hours —prohibits from whole-hearted admiration. Directed by Kurosawa, who made Rashornon, it is. the usual legendary tale of brigandage in the Middle Ages (the Japanese seem to prefer their past), a story of how a village threatened by bandits hires seven Samurai to defend it and how the battle is fought and won. A short tale expanded by a wealth of detail, by careful characterisation and by tributary sequences irlto an epic, fascinating, curious and savage. Much from the Western point of view could be pruned, but the director's mastery of his medium, his superb handling of the ferocious battle scenes, his skill in groupings, his fine photography, his ability to stamp a personal- ality on to even a minor player, make one sympathise with his reluctance to use the cut- ting scissors.

It is very courageous to build a film solely round charm. In Raising a Riot Kenneth More is left to look after three children while his wife is away, and he takes them to stay with his father, Ronald Squire, in a dilapidated windmill. There is no shred of plot, not so much as a whiff of a story anywhere, the film consisting entirely of domestic scenes and, of course, charm. There is Mr. More trying to cook, there are the children getting into scrapes, there is a foxhound puppy, a rabbit and a baby pig, there is Mr. Squire slapsticking about with a boiler, there is an American teenager, Jan Miller, next door, there is a disastrous fishing expedition and a disastrous children's party, and that is absolutely all. It says much for the actors, for the script writers, Messrs. Dalrymple, Perceval and Matthews, and for the director, Wendy Toye, that this quasi-documentary on family life at its amiable worst should approach success. Waiting as one does, foot after astonished foot, for something to happen, it is nevertheless impossible not to he caught up in the charm. not to be amused, not to love the children and Mr. More's atti- tude towards them. The ordinariness of their conversations and the naturalness of their be- haviour are strangely captivating. All the same, a story would not have been amiss, the flying of a kite, the cooking of spinach and the loss of a dog, however charingly handled, being a bit on the flimsy side for a full meal.

To the masculine digestion Jane Russell is a full meal in herself, but I fear that in Under- Ivater she will not provide the usual satisfying dish. It is true she is in a bathing suit, but she is so cumbered about with submarine devices, with oxygen apparatus, flippers, goggles and bits of rope that she does not, frankly, look her most attractive. She, Richard Egan and Gilbert 'Roland find a galleon full of gold oil the Cuban coast, and it is extraordinary how boring it is watching them try to get the spoils to the surface. Perhaps we are already sur- feited with bubbles, certainly we are blase about those roving sharks—it's about time they pulled themselves together and ate some- body—and the minutes spent gurgling in the deeps seem very long and grey.