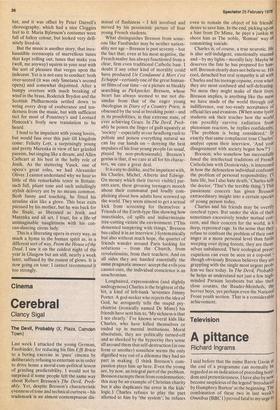 The Devil, Probably (X, Plaza, Camden Town) Last week I attacked the young German, Fassbinder, for reducing his film Effi Briest to a boring exercise in `pure' cinema by deliberately refusing to entertain us in order to drive home a moral-cum-political lesson of grinding predictability. I would not be surprised if some people felt the same way about Robert Bresson's The Devil, Probably. Yet, despite Bresson's characteristic evenness of tone and technical curtness —his trademark is an almost contemptuous dis missal of flashiness — I felt involved and moved by his pessimistic picture of four young French students.

What distinguishes Bresson from someone like Fassbinder may be neither nation ality nor age —Bresson is past seventy —but the fact that, even at his most negative, the French maftre has always functioned from a clear, firm even traditional Catholic base. I doubt if any other kind of morality could have produced Un Condamne a Mort s'est Echappe —certainly one of the great human ist films of our time —or a picture as bleakly searching as Pickpocket. Bresson, whose heart has always seemed to me not dissimilar from that of the eager young theologian in Diary of a Country Priest, is obsessed by the soul at breaking point — and in its possibilities, in that extreme state, of ever achieving Grace. In The Devil, Probably he points the finger of guilt squarely at `society' —especially at our headlong rush to pollute and poison everything natural we can lay our hands on — denying the best impulses of his four young people (as usual, played by non-professionals). Bresson's genius is that, if we care at all for his characters, we care a great deal.

It is easy to dislike, and be impatient with, his Charles, Michel, Alberte and Edwige. On money which their (never visible) parents earn, these grousing teenagers mooch about their communal pad loudly complaining about how adults have screwed up the world. They seem almost to get a sexual kick from screening for themselves a Friends of the Earth-type film showing how insectisides, oil spills and indiscriminate tree-cutting violate the environment. (This demented tampering with things,' Bresson has called it in an interview.) Systematically but also without much hope, the quartet of friends wander around Paris looking for solutions — from the Church, from revolutionists, from their teachers. And on all sides they are handed essentially the same pragmatic answer: accept the evils you cannot cure, the individual conscience is an anachronism.

Longhaired, expressionless (and slightly androgynous) Charles is the brightest of the lot, a kind of left-bank 'seventies Jimmy Porter. A god-seeker who rejects the idea of God, he arrogantly tells the stupid psychiatrist (ironically named Dr Mime) his friends have sent him to, `My sickness is that I see clearly.' I've known several kids like Charles, who have killed themselves or ended up in mental institutions. Moral absolutists, they are politically turned-off and so shocked by the hypocrisy they sense all around them that self-destruction (in one form or another) somehow seems the only dignified way out of a dilemma they had no part in making. (I think Bresson's compassion plays him up here. Even the young are, by now, an integral part of the problem. Bresson exempts them from condemnation; this may be an example of Christian charity but it also duplicates the error in the kids' logic.) Charles refuses to play the part allotted to him by 'the system'; he refuses even to remain the object of his friends' desire to save him. In the end, picking upon a hint from Dr Mime, he pays a junkie to shoot him as The noble, 'Roman' way of committing suicide.

Charles is, of course, a true neurotic. He is also self-indulgent, emotionally stunted and — by my lights — morally lazy. Maybe he deserves the fate he has prepared for hint' self. Bresson clearly does not believe so. His cool, detached but real sympathy is all with Charles and his teenage copains, even when they are most confused and self-defeating. No mess they might make of their lives, Bresson implies, is anything like the mess we have made of the world through our indifference, our too-ready acceptance of official lies and evasions. (When some lycee students ask their teacher how the world can possibly survive radiation from plutonium reactors, he replies confidently, The problem is being considered.' Ifl exactly that same complacent tone Charles analyst opens their interview, 'And your disagreement with society began how?')

Bresson, who somehow has successfully fused the intellectual traditions of French Catholicism with Dostoievsky, is interested in how the defenceless individual confronts the problem of personal responsibility. CI hate life, but! also hate death,' Charles tells the doctor. 'That's the terrible thing.') This passionate concern has given BressOn extraordinary insight into a certain species of young person today.

Charles and his friends may be overtly cerebral types. But under the skin of their sometimes excessively tender mutual concern, and their concern for the world, is a deep, repressed rage. In the sense that they refuse to confront the problem of their own anger at a more personal level than futile weeping over dying forests, they are thent

selves unbalanced. Their ecological preoc' cupations can even be seen as a cop-out though obviously Bresson believes they are grappling with the single most urgent prob' lem we face today. In The Devil, ProbablY he helps us understand not just a few high' minded Parisian layabouts but also their close cousins, the Baader-Meinhofs, the bovver boys, yes perhaps even the National Front youth section. That is a considerable achievement.