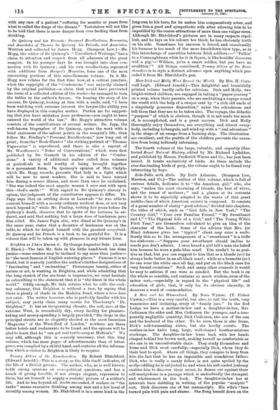 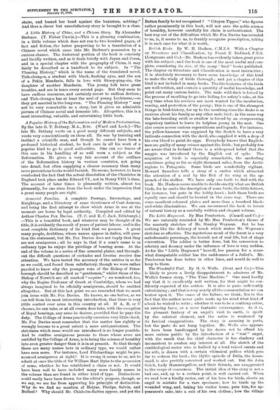 A Man and his Womankind. By Nora Wynne. (T. Fisher

Unwin.)—This is a very careful, but also, to tell the truth, very wearisome and irritating, study of "family jars." In the Red

Lodge we have a mother-in-law and a daughter-in-law, Mrs Cedicsson the elder and Mrs. Cedicsson the younger, and a tem- porarily negligible quantity, Dick Cedicsson, the son of the one and the husband of the other. To be sure, there is also Irene, Dick's self-tormenting sister, but she hardly counts. The mother-in-law knits long, large, well-shaped heather-mixture stockings. The daughter-in-law leans back with her hands clasped behind her brown neck, making herself as comfortable as she can in an uncomfortable chair. They study themselves and Irene and Dick most carefully,—especially Dick, whom they do their best to spoil. Above all things, they conspire to keep from him the fact that he has an impossible and scandalous father.

Dick, who is really a manly fellow, is not quite spoiled by the mollycoddling he is subjected to, and when his unfounded jealousy enables him to discover their secret, he flames out against their

self-martyrdoms in a passage which is undoubtedly the strongest and wholesomest in the book. The daughter-in-law has at intervals been dabbling in writing, of the popular "analytic" sort. Dick discovers one of her manuscripts. His wife's "face turned pale with pain and shame. She flung herself down on the

stairs, and leaned her head against the banisters, sobbing." And thus a clever but unsatisfactory story is brought to a close.