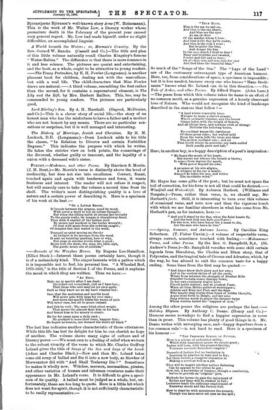 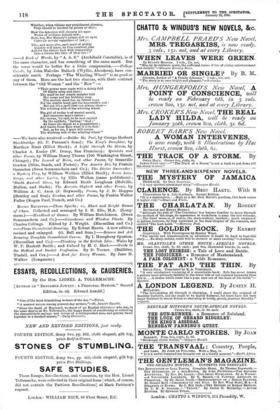 POSTs.Y.—Madonna, and other Poems. By Harrison S. Morris. (J. M.

Dent.)—Mr. Morris's verse is distinctly above the level of mediocrity, but does not rise into excellence. Correct, fluent, touched again and again with tenderness and force, it wants freshness and interest. The reader will not refuse it respect, but will scarcely care to take the volume a second time from its shelf. The writer's most distinguishing quality is a love of nature and a certain power of describing it. Here is a specimen of his work at its best :—

It broods between the grasses, mead by mead.

With never a word to tell its sylvan thought; But when the tilting earth its stream has brought To the gossip rocks, its tongue is straightway freed. Then doth it chatter of the bidden deed By mouse and muskrat in the barley wrought ; Of that wild music from the redwing caught; Of dimpled feet that waded in the weed.

Tranquil as quiet musing on the sky At twilight is its message from the wood. It asks no taunting question, how or why, But sings in careless treble what is good; Bears here the scent, the song, the little sigh, The gentle music out of solitude."

--Sonnets of the Wingless Hours. By Eugene Lee-Hamilton. (Elliot Stock.)—Interest these poems certainly have, though it is of a melancholy kind. The singer laments with a pathos which it is impossible not to feel, his personal loss. "A Wheeled Bed, 1873-1895," is the title of Section I. of the Poems, and it explains the mood in which they are written. Thus we have :— " AT Ran.

Make me in marble after I sin dead;

Stretched out recumbent, just as I have lain ; That those who care may see me once again Such as they knew me on my hard wheeled bed : Save that the motionless and marble head Will never ache with hope for ever vain ; And down the marble limbs the waves of pain Will never race, but all be peace instead.

And this be writ: The same blind silent weight That moves the planets kept him on his back And foreed.him in his misery to create.

He lay for years upon a daily rack ; He grudged to none their freer, happier fate ; He hoped no heaven, nor deemed the world all black."

The last line indicates another characteristic of these utterances. While this life has lost its delight for him be can cherish no hope of another. The volume shows many signs of culture and of literary power.—We must own to a feeling of relief when we turn to the robust vivacity of the verse to which Mr. Charles Godfrey Leland gives the title of Songs of the Sea and Lays of the Land. (Adam and Charles Black.)—Now and then Mr. Leland takes some old scrap of ballad and fits it into a new body, as Hawker of Morwenstow did with "And Shall Trelawny Die ? " Sometimes he makes it wholly new. Witches, mermen, mermaidens, pirates, and other varieties of human and inhuman creatures make their appearance in Mr. Leland's verse. It is difficult to give a speci- men of its quality. A ballad must be judged as a whole, but, un- fortunately, these are too long to quote. Here is a little bit which does not want for spirit, though it is not sufficiently characteristic 1 to be really representative "Taus BLUE.

Blue is the sea we sail on, And blue is the sky above, And blue are the eyes As sea or skies Of the maiden whom I love : And blue is the flag we're under, And blue is the coat I wear ; But brighter the blue, And deeper the hue In the eyes which I bold so dear Bluer and brighter and sweeter, Fonder and fair and as true ; Oh it's blue love and true love for over And God bless the beautiful blue."

So much of the " Songs of the Sea." The "Lays of the Land" are of the customary extravagant type of American humour. Here, too, from considerations of space, a specimen is impossible ; but it is less needed, because every one who knows " Hans Breit- mann " knows what Mr. Leland can do in this direction.—The Vale of Arden, and other Poems. By Alfred Hayes. (John Lane.) —The poem from which this volume takes its name is an effort of no common merit, as a genuine expression of a keenly observant love of Nature. Who would not recognise the kind of landscape described in the stanzas that follow ?— .. A land where venerable trees

Whisper to many a storied grange, Where orchards slumber, and the breeze Comes laden with the breath of flowers, And all thins ba9k, and nothing swift or strange Disturbs the loitering hours.

No sea-blast warps the stateliness Of those great elms ; but wafted mild From the warm hills the large airs bless The mellow midland vale ; and all That liveth where its generous sun bath smiled Doth goodly grow and tall."

Here, in another key, is a happy description of a poet's inspiration :

" He bears the music of his heart, But knows not whence the breath is blown; It oomes from regions far apart, With power beyond his own.

A presence at his aide alights, A whisper at his ear is heard ; Amazed he takes the pen, and writes The inevitable word."

Mr. Hayes has some gifts of the poet ; but he must not spare the toil of correction, for his form is not all that could be desired.— Windfall and Waterdrift. By Auberon Herbert. (Williams and Norgate.)—Prose, rather than verse, is, we should say, Mr. Herbert's forte. Still, it is interesting to turn over this volume of occasional verse, and note now and then the vigorous touch with which we are familiar elsewhere in what has come from Mr. Herbert's pen, as for instance, here :- " And you'll stand by the flag, when the faint hearts fly, And the beet that you have you'll give:

For the men, who have learnt for a cause to die, Are the men who learn to live."

—Spring, Summer, and Autumn Leaves. By Caroline Xing Robertson. (T. Fisher 17nwin.)—A volume of respectable verse, always correct, sometimes touched with feeling.—Midsummer Verses, and other Poems. By the Rev. G. Bampfleld, ILA, (St. Andrew's Press.)—Mr. Bampfield versifies with some skill certain legends from Herodotus, the Cleobis and Biton story, that of Polycrates, and the tragical tale of Cro3sus and Adrastus, which, by the way, he has altered to suit the common taste for a happy ending. Some lines from the first may be quoted :— " And Argos knew their glory and her own ;

And in the central shrine of all the earth, Where from between the strength of Brother Hills Graceful Caatalia comes dancing down.

In her own sanctuary Argive Love Placed costly statues; and at greatest Feast, When all from Hellas gathered worshippers, Athlete and King and Poet, and the Sage Who taught deep truths from fount of bidden thought, Argo, went forth to Delphi, and her sone Sang stirring words to praise the duteous twins Whom wisdom hailed the' happiest of men.' "

Among the other poems the religious are perhaps the best.--- Holiday Rhymes. By Anthony C. Deane. (Henry and Co.)— Humour seems nowadays to find a happier expression in verse than in prose. This volume has plenty of good things in it. Mr. Deane writes with unvarying ease, and—happy departure from a too common rale l—is not hard to read. Here is a specimen of his humour :—

"THE FEMININE SCHOOL OF FICTION, Here is a scheme of undoubted utility,

Which with unanimous praise we should greet ; Ladies will turn, with the greatest facility, Feminine novelists furnished complete I

Damsel, of fashion feel no hesitation in Learning by practice to bake and to fry; Let them receive a complete education hi Making a novel as well as a pie.

They will be taught whether notices flattering Can by appeals to the critics be got ; How, too, a knowledge of tongues, though a smattering, Serves to provide an 'original' plot.

Methods for heroes to gain the enjoyment of Riches and fame will be studied in full ; Lecturers teach the judicious employment of Runaway steeds and the furious bull.

How to describe with minuteness the scenery, Though you have never set eyes on the spot ; Whether, when villains pay punishment plenary, They should be finished by poison or shot ; How the detective will cleverly hit upon

Pieces of evidence nobody saw;

How, too, Her Majesty's judges will sit upon Oases (in novels) regardless of law ;— This, and more also, each maid of ability Quickly will learn, by this excellent plan And let the editors look with tranquillity Into a future like this—if they can V

—A Book of Words, by " A. A. S." (Archibald Constable), is of the same character, and has something of the same merit. But the verse would be better for a little compression.—College Carols, by John Malcolm Bulloch (Wyllie, Aberdeen), have con- siderable merit. Perhaps "The Whirling Wheel" is as good as any of them. Here are the last two stanzas, with their contrast between the " Old Woman " and the " New "

Their gowns were made with a dainty fold Of dimity crisp and clear; The maid on her simple sampler told Her name and her birthday year. The modern maid has an inbred sneer For the nimble hand and the housewife's zeal : But yet it's a spell that can always cheer— The witching wile of the whirling wheel.

The girl of to-day is of mental mould, And traverses mane career ;

She scorns, 'tie said, to be now cajoled By the epithets, ' darling," dear ; At times she stands as a pamphleteer ; And learns from Bain what it is to feel : But, as for me. I must still revere The witching wile of the whirling wheel?'