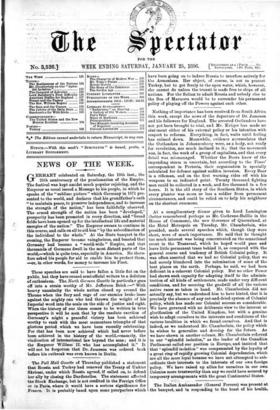 Page 17, 25 January 1896 — The Pall Mall Gazette of Thursday published a statement that
Close

The Pall Mall Gazette of Thursday published a statement that

Russia and Turkey had renewed the Treaty of Unkiar Skelessi, under which Russia agreed, if called on, to defend her ally by closing the Dardanelles. The statement affected the Stock Exchange, but is not credited in the Foreign Office or in Paris, where it would have a serious significance for France. It is probably based upon some ponrparlers which have been going on to induce Russia to interfere actively for the Armenians. Her object, of course, is not to protect Turkey, but to get freely to the open water, which, however, she cannot do unless the transit is made free to ships of all nations. For the Sultan to admit Russia and nobody else to the Sea of Marmora would be to surrender his permanent policy of playing off the Powers against each other.