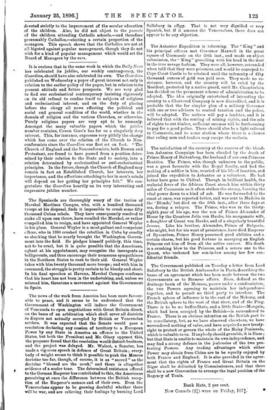 The satisfaction of the country at the success of the

blood- less Asbantee Campaign has been clouded by the death of Prince Henry of Battenberg, the husband of our own Princess Beatrice. The Prince, who, though unknown to the public, was a great favourite with the Royal family, and had the making of a soldier in him, wearied of his life of inaction, and joined the expedition to Asbantee as a volunteer. He had better have gone to Chitral. Though in brilliant health, the malarial fever of the African Coast struck him within thirty miles of Coomassie as it often strikes the strong, burning the vital power down to a kind of ash. He was forwarded to the coast at once, was reported better, and was sent to Madeira in the Blonde,' but died on the 20th inst., after three days at sea, during a relapse. The Prince, who was in the thirty- eighth year of his age, was the son of Prince Alexander of Hesse by the Countess Julia von Hauke, his morganatic wife, a daughter of Count von Hauke, and of a singularly beautiful Jewess. Like his brother, Alexander, Prince of Bulgaria, who might, but for his want of persistence, have died Emperor of Byzantium, Prince Henry possessed good abilities and a certain charm, but his good fortune in marrying an English Princess cut him off from all the active careers. His death is a crashing blow to the Princess, and a severe one to the Queen, who reckoned her son-in-law among her few con- fidential friends.