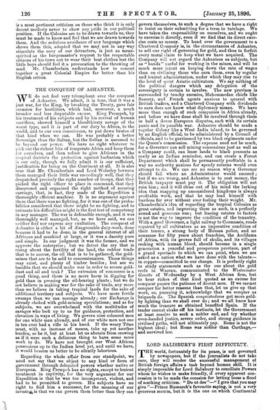 THE CONQUEST OF ASHANTEE.

WE do not feel very triumphant over the conquest of Ashantee. We admit, it is true, that it was a just war, for the King, by breaking the Treaty, gave fair occasion for hostilities, which had, moreover, a much broader and less disputable excuse. King Prempeh, by his treatment of his subjects and by his revival of human sacrifices, showed himself a bloodthirsty savage of the worst type, and it is part of our duty to Africa, to the world, and to our own consciences, to put down brutes of that kind when we can. He was probably a better Sovereign than the Sultan, but the Sultan is assumed to be beyond our power. We have no right whatever to pick out the richest bits of temperate Africa and keep them for ourselves, and then refuse to give Africans in the tropical districts the protection against barbarism which is our only, though we fully admit it is our sufficient, justification for being on the Continent at all. It is also true that Mr. Chamberlain and Lord Wolseley between them managed their little war exceedingly well, that they despatched precisely the right number of troops, that they picked the right officer to place in command, that they discovered and organised the right method of securing carriage, that, in fact, they made of the Expedition a thoroughly efficient machine. It is no argument against them that there was no fighting, for it was one of the proba- bilities considered that there might be no fighting, and to estimate his difficulties aright is the first test of competency in any manager. The war is defensible enough, and it was thoroughly well managed, but, as we have said, we can neither feel nor express any exultation. The conquest of Ashantee is either a bit of disagreeable duty-work, done because it had to be done, in the general interest of all Africans and mankind at large, or it was a dacoity pure and simple. In our judgment it was the former, and we approve the enterprise ; but we detest the cry that is rising about the fertility of the land, the rubber trade that is to accrue, the oil that is to be gathered; the gold- mines that are to be sold to concessionaires. Those things may exist, and plenty of timber besides ; but are we bandits that we should make war in order to secure gold- dust and oil and teak ? The extension of commerce is a good thing, and there is no more harm in digging for gold than in pressing the oil-bearing plants ; but we do not believe in making war for the sake of trade, any more than we believe in taking tropical lands for the sake of additional territory and subjects. We have more fertile swamps than we can manage already ; our Exchange is already choked with gold-mining speculations ; and as for subjects, we are overwhelmed with the multitudes of savages who look up to us for guidance, protection, and elevation in ways of living. We govern nine coloured men for one white man already, and of our white men not one in ten ever had a rifle in his hand. If the weary Titan must, with no increase of means, take up yet another burden, so be it, but at least let us abstain from crowing as if it were such a delicious thing to have some more work to do. We have not brought our • West African possessions up to the Indian level yet, and until we have, it would beseem us better to be silently laborious.

Regarding the whole affair from our standpoint, we need not say that we object to any kind or form of government through delegated powers whether native or European. King Prempeh bas no rights, except to lenient treatment in captivity, for the very argument for our Expedition is that he was too incompetent, violent, and bad to be permitted to govern. His subjects have no right to find him a successor, for the meaning of our invasiog,is that we can govern them better than they can govern themselves, to such a degree that we have a, right to insist on their submitting for a term to tutelage. We have taken the responsibility on ourselves, and we ought to exercise it directly, even if we find that its direct exer- cise costs us money. To hand over the government to a Chartered Company is, in the circumstances of Ashantee, to sell our right of governing for gold, and thus to forfeit every moral claim to keep what we have acquired. The Company wilt not regard the Ashantees as subjects, but as " hands " useful for working in the mines, and will be much more intent on keeping down the rate of wages than on civilising those who earn them, even by regular and lenient administration, under which they may rise to the level of quiet Asiatic cultivators. We say nothing of the political dangers which any delegation of the sovereignty is certain to involve. The new province is surrounded by touchy enemies, Mahommedan chiefs like Samory, and French agents anxious to quarrel with British traders, and a Chartered Company with dividends to earn does not know what diplomacy means. We have more than enough of such companies in Africa already, and before we have done shall be involved through them in half a dozen European disputes, each with its certain panic and its possible war. Ashantee should be made a regular Colony like a West India island, to be governed by an English official, to be administered by a Council of officials, and to be garrisoned by two black regiments under the Queen's commission. The expense need not be much, for a Governor can sell mining concessions just as well as a Company could, can lease lands to black peasants as easily as an Indian zemindar, and can create a Forest Department which shall be permanently profitable in a way no authority anxious for speedy returns would even attempt to do. We can see no reason why a Governor should fail where an Administrator would succeed ; but if we are wrong, and Ashantee is to cost money, the British taxpayer must pay it. The obligation will not ruin him ; and it will clean out of his mind the lurking idea that snapping up unconsidered kingdoms is always profitable work, and that he may load himself with burdens for ever without ever feeling their weight. Mr. Chamberlain's idea of regarding the tropical Colonies as great estates, and improving them as such, is a perfectly sound and generous one ; but leasing estates to factors is not the way to improve the condition of the tenantry. With a good Governor, a light railway to Coomassie, roads repaired by all cultivators as an imperative condition of their tenure, a strong body of Houssa police, and no nonsense for fifty years about franchise, the Aceldama of Africa, with its groves full of skulls, and its villages reeking with human blood, should become in a single generation a peaceful and prosperous province, part of a grand spectacle to which we can point, when we are asked as a nation what we have done with the talents— in copper—committed to our charge. It is perfectly right to study statements such as the one about the gold reefs in Wassail, communicated to the Westminster Gazette of Wednesday by a West African firm, but to hear riches of that kind quoted as an excuse for conquest passes the patience of decent men. If we cannot conquer for better reasons than that, let us give up that work, or, pursuing it, acknowledge that we conquer as brigands do. The Spanish conquistadores got more gold- by fighting than we shall ever do ; and we all know how much the treasure so obtained benefited Spain. If the trader cannot shake off his instincts, let the Government at least resolve to seek a nobler end, and try whether even-banded justice, severe order, and strong guidance in civilised paths, will not ultimately pay. Rome is not the highest ideal ; but Rome was nobler than Carthage,— and survived her.