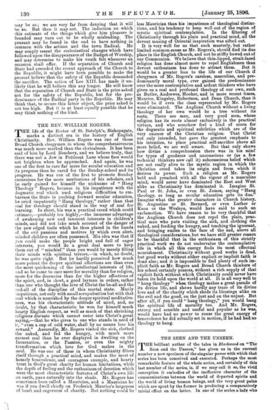 THE REV. WILLIAM ROGERS. T HE life of the Rector of

St. Botolph's, Bishopsgate, marks a distinct era in the history of English Christianity. Rev. William Rogers was one of those Broad Church clergymen in whom the comprehensiveness was much more marked than the clericalness. It has been said of him by Lord Rosebery, and we believe truly, that there was not a Jew in Petticoat Lane whose face would not brighten when he approached. And again, he was one of the first to care far more for secular education and its progress than he cared for the Sunday-school and its progress. He was one of the first to promote Sunday excursions for the more meritorious of his scholars, and he early gained for himself the nickname of " Hang Theology " Rogers, because in his impatience with the dogmatic zeal which used religious difficulties to em- barrass the State in pushing forward secular education, he cried impatiently " Haug theology," rather than that zeal for theology should stand in the way of zeal for learning. In short, his was a practical creed. which could estimate,—probably too highly,—the immense advantage of awakening new and innocent interests in children's minds, and did not take much account of the danger of the new edged tools which he thus placed in the hands of the evil passions and motives by which even alert- minded children are often possessed. His idea was that if you could make the people bright and full of eager interests, you would do a great deal more to keep them out of " mischief" than you would by merely filling their minds with spiritual terrors,—in which, no doubt, he was quite right. But he hardly perceived how much more potent the deeper spiritual affections are than even the most quickening of the intellectual interests of life, and so he came to care more for morality than for religion, more for the decencies than for the higher affections of the spirit, and, in short, a good layman in orders, rather than one who thought the love of Christ the be-all and the end-all of the discipline of this mortal state. Manly impatience, not only with small scrupulosities but with that zeal which is nourished by the deeper spiritual meditative- ness, was his characteristic attitude of mind, and, no doubt, by that characteristic he won for himself much hearty English respect, as well as much of that shrinking religious distaste which cannot enter into Christ's great saying,—that he who gives to one who stands in need. of it, " even a cup of cold water, shall by no means lose his reward." Assuredly, Mr. Rogers visited the sick, clothed the naked, and fed the hungry, with much more earnest zeal than he over displayed in dwelling on the Incarnation, or the Passion, or even the mighty transformation which love for God makes in the soul. He was one of those in whom Christianity filters itself through a practical mind, and makes the most of homely benevolence, and couragous example, and hearty trust in God's great charity for human limitations, while the depth of feeling and the enthusiasm of devotion which were the most characteristic features of Christ's own life on earth, pas s naturally into the shade. Mr. Rogers has sometimes been called a Maurician, and a Maurician he was if you dwell chiefly on Frederick Maurice's largeness of heart and eagerness of charity. But nothing could be may be so ; we are very far from denying that it will less Maurician than his impatience of theological distino. tions, and his tendency to keep well out of the region of mystic spiritual contemplation. In the filtering of Christianity through his plain and practical mind, all the devout musing of Oriental inspiration was sifted out.

It is very well for us that such masterly, but rather limited common-sense as Mr. Rogers's, should find its due place in the English Church, and not be stiffly bowed out of our Communion. We believe that thin-lipped, strait-laced religion has done almost more to repel Englishmen than devout enthusiasm has done to attract them. But it would be a greater loss to the life of our Church if clergymen of Mr. Rogers's careless, masculine, and pre, dominantly moral type, ever gained the predominance over the more contemplative and ardent thinkers who have given us a real and profound theology of our own, such as Butler, Andrewes, Hooker, and in more recent times, Maurice, Kingsley, Robertson, and Dean Church, than it would be if even the class represented by Mr. Rogers were eliminated. The Anglican Church without a living theology of her own would be a tree without its roots. There are men, and very good men, whose religion has its roots almost exclusively in the practical virtues, and who somehow feel a kind of scorn for the dogmatic and spiritual subtleties which are of the very essence of the Christian religion. That Christ not only intended, but gave the greatest emphasis to his intention, to place practical self-sacrifice above all mere belief, we are well aware. But that only shows how divine a comprehension there was in his mind for types of goodness and unconscious or (as a few technical thinkers now call it) subconscious belief which are not really alive to the mystic region in which the Christian creed takes its origin and from which it derives its power. Such a religion as Mr. Rogers held and preached with all the vigour of a masculine mind, would never have dominated the East and West alike as Christianity has dominated it. Imagine St. Paul or St. John, or even St. James, saying "Hang theology, so long as secular education gets its due." Imagine what the greater characters in Church history, St. Augustine or St. Bernard, or even Luther or Knox or the Weslevs, would have said to such an exclamation. We have reason to be very thankful that the Anglican Church does not repel the plain, prac- tical man who puts visiting the sick, and clothing the naked, and feeding the hungry, and teaching the ignorant, and bringing smiles to the face of the sad, above all theological considerations, but we have still greater reason to be thankful that in the enthusiasm of this strictly practical work we do not undervalue the contemplative life in which all this energy finds its most effectual nourishment. Christianity without good works is dead, but good works without either explicit or implicit faith is dead also; and it is impossible to find plenty of such im- plicit faith as Mr. Rogers and Broad Church thinkers of his school certainly possess, without a rich supply of that explicit faith without which Christianity could never have taken its hold upon the world at all. It is all very well to " hang theology " when theology makes a great parade of its divine life, and shows hardly any trace of its divine love and of the charity which sheds its blessings alike on the evil and the good, on the just and on the unjust. But after all, if you could " hang theology," you would hang the spiritual life of morality too. And Mr. Rogers, strong and sensible and useful and popular as he was, would have had no power to rouse the great energy of benevolence he did actually set in motion, if he had had no theology to hang.