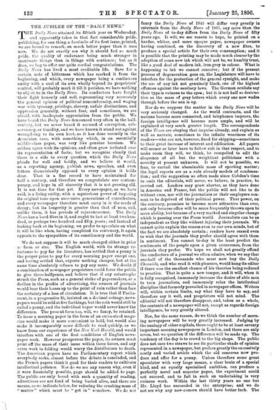 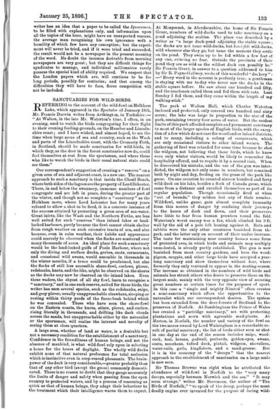 THE JUBILEE OF THE "DAILY NEWS."

THE Daily News attained its fiftieth year on Wednesday, and apparently takes in that fact considerable pride, publishing, for one thing, a facsimile of its first issue, printed, we are bound to remark, on much better paper than it uses now. We do not exactly see why it should feel so much pride, the quality of endurance being much stronger in inanimate things than in things with sentience; but as it does, we beg to offer our quite cordial congratulations. The Daily News has lived a most creditable life. Save for a certain note of bitterness which has marked it from the beginning, and which, every newspaper being a continuous entity with a soul of its own wholly beyond its proprietors' control, will probably mark it till it perishes, we have nothing to object to in the Daily News. Its conductors have fought -their fight honestly and well, representing very accurately -the general opinion of political nonconformity, and waging -war with tyranny, privilege, slavery, unfair distinctions, and oppression generally, without fear, and sometimes, we are afraid, with inadequate appreciation from the public. We 'hare heard the Daily News denounced very often in the half- century, but we never heard it accused of corruption, sub- uerviency, or timidity, and we have known it stand out against wrongdoing to its own hurt, as it has done recently in the Armenian case, with something which, in an essentially middle-class paper, was very like genuine heroism. We seldom agree with its opinions, and often grow irritated over its representation of facts; but we recognise clearly that there is a side to every question which the Daily News pleads for well and boldly, and we believe it would, as a reporting agency, publish news, speeches, and even letters diametrically opposed to every opinion it holds dear. That is a. fine record to have maintained for half a century, and therefore we congratulate our contem- porary, and hope in all sincerity that it is not growing old. It is not time for that yet. Every newspaper, as we have said, is a living entity, with a mysterious power of imposing its original tone upon successive generations of contributors, and every newspaper therefore must carry in it the seeds of decay; but its longevity is greater than that of men, and, 'unlike them, it has periods of rejuvenescence. The Daily News has a hard fibre in it, and ought to last at least two hun- dred, or perhaps two hundred and fifty, years ; and instead of looking back at its beginning, we prefer to speculate on what - it will be like when, having completed its centenary, it again appeals to the sympathies of its constituency and the world.

We do not suppose it will be much changed either in price o: form or size. The English world, with its strange re- luctance to pay for its literature, has settled that a penny is the proper price to pay for every morning paper except one, and having settled that, expects nothing cheaper, but at the same time absolutely refuses to pay any more. We doubt if a combination of newspaper proprietors could force the public to give three-halfpence, and believe that if any catastrophe struck the Press, such as a general strike of papermakers, or a decline in the profits of advertising, the owners of journals would bear their losses up to the point of ruin rather than face the certainty of a loss of circulation. It is true that if Parlia- -ment, in a progressive fit, insisted on a decimal coinage, news- papers would be sold at five farthings, but the coin would still be called a penny, and the individual buyer would never know the difference. The present form too, will, we fancy, be retained. 'To issue a morning paper in the form of an extra-sized maga- zine would make it more convenient to hold, but would also make it incomparably more difficult to read quickly, as we know from our experience of the New York Herald, and would interfere with one of the first conditions of English news- paper work. However prosperous the paper, its owners must print off the mass of their issue within three hours, and any extra work in folding would worry the distributors to death. The American papers have no Parliamentary report which everybody seeks, almost before the debate is concluded, and the French papers think it good for their readers to cultivate intellectual patience. Nur do we see any reason why, even if it were financially possible, page should be added to page. The public are only bored with such a quantity of reading, advertisers are not fond of being buried alive, and there are aneans, as we indicate below, for reducing the crushing mass of 4. matter " which must be " got in " somehow. We do not fancy the Daily News of 1945 will differ very greatly in externals from the Daily News of 1895, any more than the Daily News of to-day differs from the Daily News of fifty

years ago. It will, we see reason to hope, be printed on a harder, whiter, and more opaque paper, newspaper owners having combined, on the discovery of a new fibre, to produce a special article for their own consumption; and it is possible that the printing may be made much clearer by the adoption of some new ink which will not be, we humbly trust, like a good deal of modern ink, iron-grey in colour. What is happening to ink we cannot conceive ; but if the present process of degeneration goes on, the Legislature will have to interfere for the protection of the general eyesight, and make the use of any ink not genuinely black, one of the highest offences against the sanitary laws. The German oculists say their type is ruinous to the eyes ; but it is not half so destruc- tive as the mass of grey letters which every one now wades through before the sun is up.

Nor do we suppose the matter in the Daily News will be very seriously changed. As the world contracts, and the nations become more connected, and telephones improve, the foreign intelligence will become more ample, and will be explained at very much greater length. The correspondents of the Times are obeying that impulse already, and explain as well as narrate, sometimes to the infinite weariness of its readers—who are not, however, fined for skipping—sometimes to their great increase of interest and edification. All papers will sooner or later have to follow suit in that respect, and to make room they will, we think, be compelled to edit the eloquence of all but the weightiest politicians with a severity at present unknown. It will not be possible, we fear, to curtail the abominable mass of sporting matter; the legal reports are as a rule already models of condensa- tion ; and the suggestion so often made since Cobden's time to omit the editorials, will never, we believe, in practice, be carried out. Leaders may grow shorter, as they have done in America and France, but the public will not like to do without cues, nor will the journalists or their employers con- sent to be deprived of their political power. That power, on the contrary, promises to become more attractive than ever, not only because office will be more frequently thrown open to mere ability, but because of a very marked and singular change which is passing over the Press world. Journalists can be as independent as they like without injuring their journals. We cannot quite explain the reason even to our own minds, but of the fact we are absolutely certain ; readers have ceased even to wish that the journals they prefer should agree with them in sentiment. Yoa cannot to-day in the least predict the sentiments of the people upon a given occurrence, from the journals they prefer. We hope we shall not greatly offend the conductors of a journal we often admire, when we say that one-half of the thousands who must now buy the Daily Chronicle, and who read it with pleasure, would hang its editor if there was the smallest chance of his theories being reduced to practice. That is quite a new temper, and it will, when it is fully recognised, immensely increase the desire of able men to turn journalists, and immensely relax the intellectual discipline that formerly prevailed in newspaper offices. Writers will, within certain limits, say what they have to say, and therefore say it well, and proprietors will not mind. The editorial will not therefore disappear, and, taken as a whole, the contents of a newspaper will not, except as regards foreign intelligence, be very greatly altered.

Nor, for the same reason, do we think the number of morn- ing newspapers will be very greatly increased. Judging by the analogy of other capitals, there ought to be at least seventy important morning newspapers in London, and there are only seven, but we question if the difference will be made up. The tendency of the day is to crowd to the big shops. The public does not care two straws to see its particular shade of opinion represented in a newspaper, but prefers greatly the excessively costly and varied article which the old concerns now pro- duce and offer for a penny. Unless therefore some great speculator with very large means, a clear brain of a special kind, and an equally specialised ambition, can produce a perfectly novel and superior paper, the experiment could not succeed, and to fail in such an undertaking is very ruinous work. Within the last thirty years no one but Mr. Lloyd has succeeded in the enterprise; and we do not see why any new-comers should have better luck. The writer has an idea that a paper to be called the Ignoramus, to be filled with explanations only, and information upon all the topics of the hour, might have an unexpected success, the average man recognising his own ignorance with a humility of which few have any conception; but the experi- ment will never be tried, and if it were tried and succeeded, the result would not be a newspaper in the present meaning of the word. No doubt the incomes derivable from morning newspapers are very great ; but they are difficult things for syndicates to manage, and individual millionaires rarely possess the special kind of ability required. We suspect that the London papers which are, will continue to be for long periods, possibly for centuries; and that among the difficulties they will have to face, fierce competition will not be included.