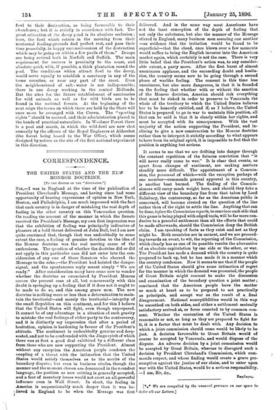 THE UNITED STATES AND THE NEW MONROE DOCTRINE.

was in England at the time of the publication of President Cleveland's Message, and having since bad some opportunity of hearing expressions of opinion in New York, Boston, and Philadelphia, I am much impressed with the fact that each country is in danger of mistaking the real depth of feeling in the other country on this Venezuelan question. On reading the account of the manner in which the Senate received the President's Message, my own first impression was that the exhibition of feeling was principally indicative of pleasure at a bold thrust delivered at John Bull, but I am now quite convinced that, though that was undoubtedly to some extent the case, a feeling of genuine devotion to the idea of the Monroe doctrine was the real moving cause of the enthusiasm. The question of whether the doctrine did or did not apply in this particular case did not enter into the con- sideration of any one of those Senators who cheered the Message to the echo ;—the President had hoisted the danger- signal, and the spontaneous reply meant simply " We are ready." After consideration many have come now to wonder whether the doctrine as enunciated by President Monroe covers the present case at all, but concurrently with this doubt is springing up a feeling that if it does not it ought to be made to do so, and this among grave men. The new doctrine is nothing more or less than a determination to main- tain the territorial—and merely the territorial—integrity of the small Republics on this continent, and for this I believe that the United States will fight, even though unprepared. It cannot be of any advantage in a situation of such gravity to mistake the real feelings of either party to the controversy, and it is distinctly my impression that after a period of hesitation, opinion is hardening in favour of the President's attitude. The sentiment is undoubtedly genuine and deep- seated, and not to be confounded with the Jingo spirit of which there was at first a good deal exhibited by a different class from those who are now supporting the President. Almost without any exception the American people condemn the coupling of a threat with' the intimation that the United States would satisfy themselves as to the merits of the boundary dispute ; but even in business circles, though the manner and the moment chosen are denounced in the roundest language, the position as now existing is generally accepted, and a fear of monetary losses would not exert an all-powerful influence even in Wall Street. In short, the feeling in America is unquestionably much deeper than it was be- ['V

-lieved in England to be when the Message was first defer all our Letters.]

delivered. And in the same way most Americans have not the least conception of the depth of feeling that not only the substance, but also the manner of the Message stirred in England, many business men assuring one another —as evidence that the irritation would be found to be superficial—that the cloud, once blown over a few moments would suffice to bring the English investor into the American market again, which certainly is not the case. There is very little belief that the President's action was, to any consider- able extent, a party move. After the first burst of almost unanimous applause, and the succeeding doubt and hesita- tion, the country seems now to be going through a second phase of warlike feeling. The consent is this time less unanimous, but also more dangerous, in that it is founded on the feeling that whether with or without the sanction of the Monroe doctrine, America should risk everything that must be risked in order to preserve to Venezuela the whole of the territory to which the United States believes her to be honestly entitled, and if, as I believe, the United States is prepared to go to war to maintain this position, all that can be said is that it is clearly within her rights, and must be accepted with its consequences. With the vast majority of the nation supporting the President, and in- clining to give a new construction to the Monroe doctrine rather than to interpret it strictly according to what appears to have been its original spirit, it is impossible to feel that the position is anything but serious.

It seems to me that we are drifting into danger through the constant repetition of the fatuous conviction that " it will never really come to war." It is clear that events, as apart from changes of sentiment, are making matters steadily more difficult. The appointment of a Commis- sion, the personnel of which—with the exception perhaps of one member—commands general approval in this country, is another boat burned. The finding of the Commis- sioners will carry much weight here, and should they take a. different view of the boundary line from that taken by Lord Salisbury, the controversy, so far as the American public is concerned, will become riveted on the question of the line rather than of the right to settle the line. Anything that can be done, before the Commission reports, to convince each side that this game is being played with edged tools, will be far more con- ducive to a peaceful settlement than all the efforts that could be made afterwards, should the Commission deny the British claim. I am speaking of facts as they exist and not as they might be. Both countries are in earnest, and we are proceed- ing towards an event, to wit, the reporting of the Commission,. which clearly has as one of its possible results the alternative of an absolute capitulation by one side or the other, or war. The President has made a demand which the country is quite- prepared to back up, but he has made it in a manner which the country condemns. Now it seems to me that if the people of the United States should give some intimation of regret for the manner in which the demand was presented, the people- of Great Britain might consent to make the discussion and examination of the boundary question a joint matter ; convinced that the American people have the matter so much at heart as to be prepared to act practically as principals, and accept war as the result of a final disagreement. National susceptibilities would in this way be smoothed on both aides, and either a settlement mutually satisfactory arrived at., or force resorted to by common-, con- sent. Whether the contention of the United - States is reasonable or not, so long as they are prepared to fight for it, it is a factor that must be dealt with. Any decision to which a joint commission should come would be likely to be just. A decision favourable to Great Britain would of course be accepted by Venezuela, and would dispose of the dispute. An adverse decision by a joint commission would be accepted by Great Britain, whereas to disregard such "a decision by President Cleveland's Commission, whioh com- mands respect, and whose finding would create a grave pre- sumption against the justice of our claim, and to enter upon war with the United States, would be a, serious responsibility. —I am, Sir, do.,

We are compelled by the unusual pressure on our space to