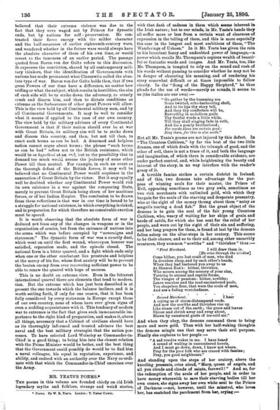 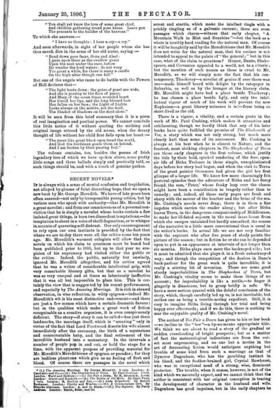 THE poems in this volume are founded chiefly on old Irish legendary myths and folklore, strange and weird stories,

with that dash of sadness in them which seems inherent in the Irish nature; but to our minds, in Mr. Yeats's hands they all suffer more or less from a certain want of clearness of expression in the telling of them, and this is more especially the case in the longest and most ambitions of them, "The

Wanderings of Usheen." In it Mr. Yeats has given the rein to his luxuriant fancy and undoubted power of language,—a power which recalls Mr. Thompson's copious wealth of beauti- ful or fantastic words and images. And Mr. Yeats, too, like Mr. Thompson, is tempted to rely on the sound and rush of his words without pausing to consider whether he may not be in danger of obscuring his meaning, and of rendering his story somewhat difficult or at times impossible to follow clearly. In the "Song of the Happy Shepherd," he thus pleads for the use of words—merely as sounds, it seems to us (the italics are our own) :-

" Go gather by the humming sea Some twisted, echo-harbouring shell, And to its lips thy story tell, And they thy comforters will be, Rewording in melodious guile Thy fretful words a little while, Till they shall singing fade in ruth, And die a pearly brotherhood; For words alone are certain good : Sing them, for this is also sooth."

But all Mr. Yeats's poems are not injured by this defect. In "The Countess Cathleen," by far the best of the two little dramas, one of which deals with the triumph of good, and the other of evil, there is not a trace of it, and both the language

and imagination, of which there is considerable evidence, are under perfect control, and, while heightening the beauty and interest of the story, in no way interfere with the reader's grasp of it.

A terrible famine strikes a certain district in Ireland, and of this, two demons take advantage for the pur- pose of winning souls for their master, the Prince of Evil, appearing sometimes as two grey owls, sometimes as two rich merchants with unlimited gold, with which they bargain for the souls of the starving and desperate peasantry, who at the sight of the money throng about them "noisy as seagulls tearing a dead fish." But the great object of the demons is to gain the soul of the fair young Countess Cathleen, who, weary of waiting for her ships of grain and herds of cattle, for which she has sent for the relief of her people, and worn out by the sight of their sin and suffering-, and her long prayers for them, is found at last by the demons fallen asleep on the altar-steps in her oratory. This seems to be their chance, and so to their aid, among other unearthly creatures, they summon " sowlths " and " thivishes" thus :—

"First Merchant. I will draw them in.

[He cries through the windotol Come hither, you lost souls of men, who died In drunken sleep, and by each other's hands, When they had bartered you away to us At Shemus Rua's: hither, thivishes, Who mourn among the scenery of your sins, Turning to animal and reptile forms, The visages of passions: hither, sowlths; Leave marshes and the reed-encumbered pools,

You shapeless fires, that were the souls of men,

And are a fading wretchedness.

A crying as of storm-distempered reeds. And now the sowlths and thivishes rise up Like steam out of the earth ; the grass and leaves Shiver and shrink away and sway about,

And when they obey, the demons command them to bring more and more gold. Then with her half-waking thoughts

the demons mingle one that may serve their evil purpose. Finally she explains to her people :—

" A sad resolve wakes in me. I have heard A sound of wailing in unnumbered hovels, And I must go down, down, I know not where. Pray for the poor folk who are crazed with famine; Pray, you good neighbours."

And standing upon the steps of her oratory, above the kneeling peasants, cries aloud, "Mary, queen of angels, and all you clouds and clouds of saints, farewell!" And so, for- the redemption of the souls of her people, and in order to have money wherewith to save their starving bodies till her own comes, she signs away her own white soul to the Prince of Darkness :—not, however, until the minstrel, who loves her, has snatched the parchment from her, crying :—

" You shall yet know the love of some great chief, And children gathering round your knees. Leave you The peasants to the builder of the heavens."

To which she answers:-

And soon afterwards, in sight of her people whom she has thus saved, dies in the arms of her old nurse, saying :—

" Bend down your faces, Oona and Aleel : I gaze upon them as the swallow gazes Upon the nest under the eave, before He wander the loud waters: do not weep Too great a while, for there is many a candle On the high altar though one fall."

But one of the angels who came to do battle with the Powers of Hell declares that- " The light beats down : the gates of pearl are wide, And she is passing to the floor of peace, And Mary of the seven times wounded heart Has kissed her lips, and the long blessed hair Has fallen on her face; the Light of Lights Looks always on the motive, not the deed, The Shadow of Shadows on the deed alone."

It will be seen from this brief summary that it is a poem of real imagination and poetical power. We cannot conclude this little notice of it without quoting the striking and original image uttered by the old nurse, when the dreary thought of life without her child first falls upon her heart :- " The years like great black oxen tread the world, And God the herdsman goads them on behind, And I am broken by their passing feet."

The volume contains, too, besides the poems of Irish legendary lore of which we have spoken above, some pretty little songs and three ballads simply and poetically told, as such things should be, and with a touch of genuine pathos.