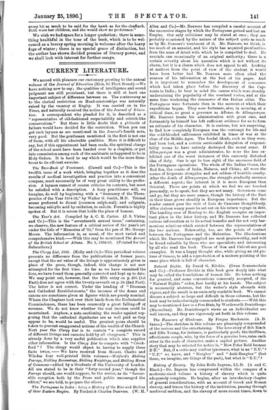 The Portuguese in India : being a History of the

Rise and Decline of their Eastern Empire. By Frederick Charles Danvers. (W. H. Allen and Co.)—Mr. Danvers has compiled a careful account of the successive stages by which the Portuguese gained and lost an Empire. Our only criticisms may be stated at once ; they are probably occasioned by the nature of the subject quite as much as by Mr. Danvers's treatment of it. Mr. Danvers, we think, is too much of an annalist, and his style has acquired peculiarities from the mass of detail with which he is compelled to deal. He reminds one occasionally of an original authority ; there is a certain severity about his narrative which is not without its charm, but it is a charm which does not appeal to all. Looking at matters from the point of view of the student it would have been better had Mr. Danvers more often cited the sources of his information at the foot of his pages. And it is important to remember the development of commerce which had taken place before the discovery of the Cape route to India ; to bear in mind the causes which were steadily undermining the popularity of the overland routes, and at the same time weakening the commerce of the Italian cities. The Portuguese were fortunate then in the moment at which their expeditions began. They were fortunate, also, in securing, at a critical time, so great a governor as Affonso do Albuquerque. Mr. Danvers treats his administration with great care, and fortunately he himself has left sufficient evidence for us to form an estimate of his character. It is curious, but not surprising, to find how completely European was the contempt for life and the cold-blooded callousness exhibited in times of war at the close of the Middle Ages. The feudal ideals, such as they were, had been lost, and a certain serviceable delegation of responsi- bility seems to have entirely destroyed the moral sense. If Albuquerque was a great administrator, he ncno the less ex- hibited one of the worst instances of this curiously distorted idea of duty. One is apt to lose sight of the enormous field of the Portuguese operations. The whole of the Indian Ocean, the Red Sea, the coasts of India, Malacca, and China ; all were the scenes of desperate struggles and not seldom of horrible cruelty. After the death of Albuquerque, the struggle gradually assumes a different aspect ; the interest in it is more European than Oriental. There are points at which we feel we are touched personally, so to speak, but they are not many. Governors come and go, but they are mere names, though the history of the East in their time grows steadily in European importance. But the reader cannot pass the visit of Luiz de Camoens thoughtlessly. After sixteen weary years he set out on his return voyage in debt. The handing over of Bombay to the English occupies an impor- tant place in the later history, and Mr. Danvers has collected curious information as to its actual transfer and the not very har- monious relations which existed between the representatives of the two nations. Noteworthy, too, are the points of contact between the Portuguese and the Mabrattas. The illustrations which Mr. Danvers has supplied are most praiseworthy, and will be found valuable by those who are specialists, and interesting by all who read the book. Those of Goa and Calicut are good examples. It was a happy thought also, while giving an old pic- ture of Ormuz, to add a reproduction of a modern painting of the same place which is full of character.