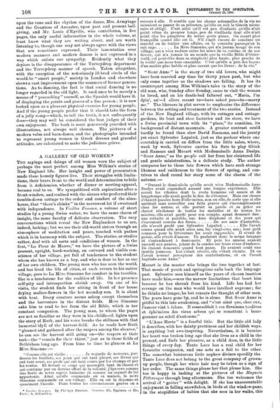 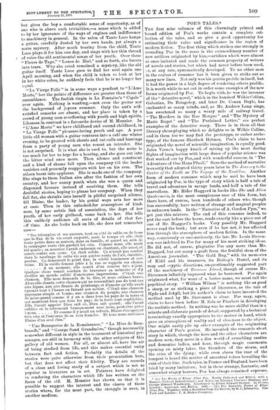 A GALLERY OF OLD WOMEN.*

New England life. Her insight and power of presentation made these homely figures live. Their struggles with limita- tions, their brave front to the world and determination to hide from it deficiencies, whether of dinner or meeting-apparel, became real to us. We sympathised with aspirations after a front-window, and realised with the sisters who preferred their tumble-down cottage to the order and comfort of the alms- house, that "there's chinks" in the narrowest lot if sweetened with independence. In Vieilles Femmes, a volume of short studies by a young Swiss writer, we have the same charm of insight, the same faculty of delicate observation. The racy conversations which reveal the New Englanders to us are, indeed, lacking ; but we see their old-world sisters through an atmosphere of meditation and peace, touched with pathos which is in harmony with the subject. The stories, or studies rather, deal with all sorts and conditions of women. In the first, "La Fleur de Mauve," we have the picture of a Swiss peasant, upright, hard-working, an outward and visible con- science of her village, yet full of tenderness to the student whom she has known as a boy, and who is dear to her as one of her own children. The young man who has seen the world, and has lived the life of cities, at each return to his native village, goes to La Mere Simonne for comfort in his troubles.

She is a touchstone for the realities of life. In her presence self-pity and introspection shrink away. On one of his visits, the student finds her sitting in front of her house drying mallow-flowers in the hot noonday sun. It is silent with heat. Every creature seems asleep except themselves and the harvesters in the distant fields. Mere Simonne asks him to read to her from the old Bible, which is her constant companion. The young man, to whom the pages are not so familiar as they were in his childhood, lights upon the story of Ruth, and his voice breaks the stillness with that immortal idyll of the harvest-field. As he reads how Ruth "gleaned and gathered after the reapers among the sheaves," he can see the harvest still going on—the reapers at their task—the "vessels for their thirst," just as in those fields of Bethlehem long ago. From time to time he glances at La Mere Simonne :- " Comme elle est vieille Je regarde de nouveau, par-

" Scour Anne " is the story of two old lovers, who might have been married any time for thirty years past, but who only come together as the shadows are falling. It has its counterpart among Miss Wilkins's tales in the story of the old man, who, Sunday after Sunday, came to visit the woman

he loved, and on his death-bed faltered out, " Maria, I'm dyin', an'—I allers meant to—have asked you—to—marry me." The likeness in plot serves to emphasise the difference between the setting and treatment of the two stories. Instead of the New England village, with its cottages and cottage- gardens, its boot and shoe factories and its store, we have a Swiss provincial town with its " place," its sunshine, its background of distant mountain. A greater contrast could hardly be found than slow David Emmons, and the jaunty yet exact Sylvestre Lapalud, just as the parlour where one courtship is carried on differs from the little salon, where, week by week, Sylvestre carries his flute to play Gliick and Ramean and Mozart with Mademoiselle Anna Deslys. "Scour Anne," as the people call her from her cloistered life and gentle ministrations, is a delicate study. The author compares her to those late flowers which have such strange likeness and unlikeness to the flowers of spring, and con- trives to shed round her story some of the charm of the autumn :-

Mozart is the master who brings the two together at last. That music of youth and springtime calls back the long-ago past. Sylvestre sees himself as the years of chosen inaction have made him,—sees the narrow limitations that beset him because he has shrunk from his kind. Life has had her revenge on the man who would have intellect supreme ; for

he thinks no longer, he but repeats the thought of other men. The years have gone by, and he is alone. But Scour Anne is pitiful to this late awakening, and "c'est ainsi que, chez eux, l'amour vint it eclore. Il ressemblait ii ces floraisons tardives et ephemeral des vieux arbres qui se remettent ii bour- geonner an aoleil d'automne."

" L'Ame Morte" is a fearful title. But the little old lady it describes, with her dainty prettiness and her childish ways, is anything but awe-inspiring. Nevertheless, it is because her heart was broken long ago that she lives as a child in the present, and finds her pleasure, as a child does, in the little things of every day. Tante Luce has a real child for her favourite companion, and one acts as a foil to the other. The somewhat boisterous little nephew divines speedily tha Tante Luce does not belong to the great company of grown- up people, though her white hair may be taken as a sign of her order. The same things please her that please him. She too is happy in looking at the pictures of the Magasin Pittoresque through long afternoons. She too welcomes the arrival of " goiter" with delight. If she has unaccountable enjoyment in falling snowflakes, in birds at the window-pane, in the stupidities of babies that she sees in her walks, this but gives the boy a comfortable sense of superiority, as of one who is above such trivialities,—a sense which is added to by her ignorance of the ways of engines and indifference to machinery in general. In the salon of Tante Luce hangs a guitar, carefully dusted by her own hands, yet always a mute mystery. After much teasing from the child, Tante Luce plays it for him one day, and sings with her thin thread ( of voice the old sentimental songs of her youth. Over these " Pleura de Tage," " Limes de Miel," and so forth, she bursts into tears. Why she cried remained a mystery, like the old guitar itself. Tante Luce goes to find her soul again one April morning, and when the child is taken to look at her in her white robes, he suddenly feels that he is no longer her equal.

"La Vierge Folle" is in some ways a pendant to "L'Ame Morte," but the points of difference are greater than those of resemblance. The foolish virgin is La Fontaine's " Cigale " over again. Nothing is wanting,—not even the guitar nor the background of joyous summer. Only the ant's self- satisfied remarks are absent, and her place is taken by a crowd of young men overflowing with youth and high spirits. Likeness in contrast is a favourite device of M. Monnier. In "L'Ame Morte" we have childhood and second childhood, in " La Vierge Folle" pleasure-loving youth and age. A poor little old woman with a guitar ventures into a cafe one winter evening, to be greeted with shouts and cat-calla and hootings from a party of young men who resent an intruder. She is not surprised. It is what she is used to, but the noise is ' too much for her to hope for a hearing, and she goes out into the bitter wind once more. Then silence and constraint and a kind of shame fall upon the company till the leader vanishes and presently reappears with her on his arm. The others burst into applause. She is made one of the company. She sings to them Italian airs after the fashion of her own country, and her sunny youth when she was a queen and dispensed favours instead of receiving them. She tells doubtful stories, hoping to please her company. When they fall flat, she shrinks into herself in pitiful surprised silence, till Blaise, the leader, by his genial ways sets her more at ease. Then in this unlooked-for atmosphere of kind- ness, by some subtle link of association, the days of her youth, of her early girlhood, came back to her. She tells

brandt," and " George Sand Grandmere," though necessarily somewhat different in style in the treatment of historical per- sonages, are still in harmony with the other subjects of this gallery of old women. For all, or almost all, have the air of being studied from life, and this makes essential unity between fact and fiction. Probably the details of the stories were quite otherwise from their presentation here, but that does not affect their fidelity. They are records of a close and loving study of a subject which is not so popular in literature as in art. Painters have delighted in rendering the characters which life has written on the faces of the old. M. Moonier has shown us that it is possible to suggest the interest and the charm of these stories where, for the most part, the struggle is over, in another medium.