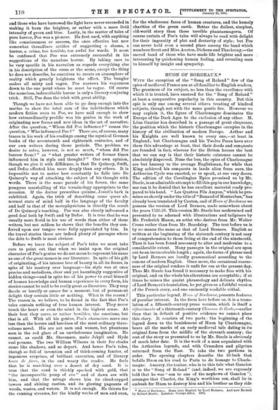 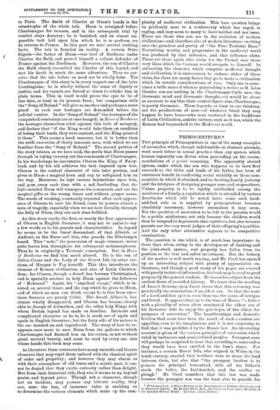 WITH the exception of the "Song of Roland" few of the epics of medimval France are at all familiar to English readers. The greatness of its subject, no less than the excellence with which it is treated, have ensured for the "Song of Roland" at least a comparative popularity in this country. But this epic is only one among several others treating of kindred subjects, though not with the same poetic fire. However we may explain it, the figure of Charlemagne dominates the Europe of the Dark Ages to the exclusion of any other. M. Leon Gautier has described in a passage of great eloquence, the position which the historic Charlemagne occupies in the history of the civilisation of modern Europe. Arthur and his Knights are well known to every one,—at least in England ; but Charlemagne and his Twelve Peers have over them this advantage at least, that their deeds and conquests are founded in fact, whereas for the Briton heroes the best that we can say is that their historic existence cannot be absolutely disproved. None the less, the epics of Charlemagne are but hearsay to the average Englishman, for while that King achieved his conquests in lands alien from ours, the Arthurian Cycle was enacted, so to speak, at our very doors. The edition of the Carolingian Epics promised us by Mr. Steele, is an admirable attempt to fill this gap in our knowledge; nor can it be denied that he has excellent material ready pre- pared to his hand. " Les Quatres Fils Amyon," which he pro- mises DR shortly under the title of "Renaud of Montauban," has already been translated by Caxton, and of Huon of Bordeaux we possess the version of Lord Berners, made somewhere about the years 1526-28. This version Mr. Steele has modernised and presented to us adorned with illustrations and tailpieces by Mr. Frederick Mason, an artist who derives from Mr. Walter Crane rather than from Mr. Beardsley. The text before us is by no means the same as that of Lord Berners. English as written at the beginning of the sixteenth century is not easy of comprehension to those living at the end of the nineteenth. Thus it has been found necessary to alter and modernise to a considerable extent. Many passages in the original are spun out to an inconceivable length ; again, the turns of phrase used by Lord Berners are hardly grammatical according to the canons of modern English. Once more, the occasional coarse- ness of the original renders it unfit for use at the present day. Thus Mr. Steele has found it necessary to make free with his original, and on the whole his alterations are acceptable ; if at times he misses the quaint phraseology and delicate rhythm of Lord Berners's translation, he yet gives us a faithful version of the French story, and one eminently readable withal.

This particular legend, Hum?, of Bordeaux, presents features of peculiar interest. In the form here before us, it is a trans- lation of a fifteenth-century prose version, which is itself a rifaccimento of a thirteenth-century Chanson de Geste,—earlier than that in default of positive evidence we cannot place this story. It consists of two parts : the beginning of the legend down to the banishment of Huon by Charlemagne, bears all the marks of an early mediaeval tale dating in its original form from the middle of the eleventh century ; the rest of the story as presented to us by Mr. Steele is obviously of much later date. It is the work of a man acquainted with the Arthurian legends, and with Crusaders and pilgrims returned from the East. To take the two portions in order. The opening chapters describe the ill-luck that befalls Huon on his road to Paris to do homage to Charle- magne. Amaury, the traitor, who is to this tale what Ganelon is to the " Song of Roland" (and, indeed, we are expressly told that he was " son to one of the nephews of Ganelon "), arranges that Charlot, the King's worthless son, shall lie in ambush for Huon to destroy him and his brother as they ride * Huon of Bordeaux. Done into English by Lord Berners. And now Re-told by Robert Steele. London : George Allen. 1895.

to Paris. The death of Chariot at Huon's hands is the catastrophe of the whole tale. Huon is arraigned before Charlemagne for treason, and in the subsequent trial by combat slays limaury ; he is banished, and an almost im- possible task laid upon him which he is to perform ere he returns to France. In this part we note several striking facts. The tale is founded on reality. A certain Duke Sdguin—the father of Hnon—was lord of Bordeaux under Charles the Bald, and proved himself a valiant defender of France against the Northmen. Moreover, the son of Charles the Bald closely resembled the Chariot of this legend, and met his death in much the same adventure. Thus we per- ceive that the tale before us need not be wholly false. The Charlemagne of this story is in every respect one of the later Carolingians ; he is wholly without the sense of dignity or justice, and his vassals are forced at times to rebuke him in plain terms. This in itself would prove the epic to be of late date, at least in its present form ; but comparison with the " Song of Roland " will give us another and perhaps a surer proof. In each case hostages are demanded before the judicial combat. In the "Song of Roland" the hostages of the vanquished combatant are at once hanged; in Huon of Bordeaux the hostages themselves rebel against this relic of savagery, and declare that " if the King would take them on condition of losing their lands, they were content, and the King granted it them." This seems a hard measure, but it is better than the swift execution of thirty innocent men, with which we are familiar from the "Song of Roland." The second portion of the story relates, as we have said, the perils that Huon passes through in trying to carry out the commands of Charlemagne. In his wanderings he encounters Oberon the King of Fairy- land, and by his aid achieves the task imposed upon him. Oberon is the central character of this later portion, and gives to Huon a magical horn and cup to safeguard him on the way. Moreover, he lays various injunctions upon him, and goes away each time with a sad foreboding that the light-minded Huon will transgress his commands, and use the magical gifts at the wrong times and without proper cause. The words of warning, constantly repeated after each appear- ance of Oberon to save his friend, come to possess almost a note of tragedy, especially when we see how literally, through the folly of Huon, they are each time fulfilled.

As this story marks the first, or nearly the first, appearance of Oberon in English literature, it may not be amiss to say a few words as to his genesis and characteristics. In legend he seems to be the lineal descendant. of that Albrich, or Andvari, as the Norse call him, who guards the Nibelungen hoard. This " note," the possession of magic treasure, never quite leaves him throughout his subsequent metamorphoses. Thus he is originally a Teutonic conception. But in Huon of Bordeaux we find him much altered. He is the son of Julius Omar and the Lady of the Secret Isle (in other ver- sions, of Morgan le Fay herself). This idea introduces the element of Roman civilisation, and also of Latin Christen- dom; for Oberon, though a dwarf, has become Christianised, and is specially anxious to help Huon against the followers of " Mahound." Again, his " angelical visage," which is in- sisted on several times, and the cup which he gives to Huon, and of which no man can drink except he is free from sin— these features are purely Celtic. The dwarf, Alberich, has almost wholly disappeared, and Oberon has become closely akin to Joseph of Arimathea, and the other holy Kings with whom Breton legend has made us familiar. Intricate and complicated character as he is, he is made use of again and again in English literature ; but the fairy side of his nature is the one insisted on and reproduced. The story of how he re- appears once more to save Huon from the gallows to which Charlemagne had doomed him on his return, is not without great natural beauty, and must be read by every one into whose hands this book may come.

As literature these romances have many uncouth and bizarre elements that may repel those imbued with the classical spirit of order and propriety ; and however they may charm us with their atmosphere of old times and a mystic past, it can- not be denied that they excite curiosity rather than delight. But from their historical side, they are, it seems to us, beyond praise and beyond price. Though not a character, though not an incident, may possess any historic reality, they are, none the less, of immense value in enabling us to determine the various elements which make up the com-

plexity of mediaeval civilisation. This bare question brings us perilously near to a controversy which has raged, is raging, and may seem to many to have neither end nor issue. There are those who can see in the evolution of modern civilisation—and therefore also of modern literature—nothing save the grandeur and purity of "the Free Teutonic Race." Everything worthy and progressive in the mediaeval world was produced by that influence, and that influence alone. There are those again who claim for the French race those very ideas which the German would arrogate to himself. In estimating the elements which comprise medimval thought and civilisation, it is unnecessary to endorse either of these views, for there are many forces that go to make a civilisation which lie outside considerations of race. Only one is some- times a trifle amazed when so painstaking a writer as M. Ldon Gautier can see nothing in the Charlemagne Cycle save the Germanic mind and Germanic thought,—it would be about as accurate to say that their central figure also, Charlemagne, is purely Germanic. These legends, at least to our thinking, are the productions of men—of whatever blood they may happen to have been—who were nurtured in the traditions of Latin Civilisation, and the culture, such as it was, which the Roman had bequeathed to the Media: al world.