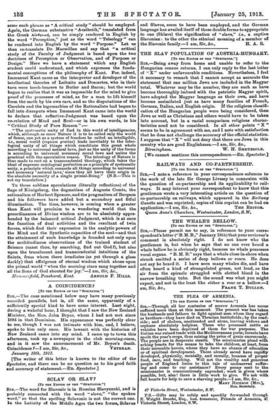 THE PLEA OF ARMENIA.

[TO THE EDITOR OF THE "SPECTATOR."] Sin,—Through all her centuries of sorrow Armenia has never suffered more than at this moment. The present war has taken the husbands and fathers to fight against men whom they regard as brothers—they have died on Thracian battlefields ; by the road- side ; and of cholera, unattended and alone, leaving widows and orphans absolutely helpless. Those who possessed cattle or vehicles have been deprived of them for war purposes. The Italian war ruined trade with the Mediterranean ports; locusts have spoilt the year's crops, thus raising the price of grain enormously. The people are in desperate straits. The missionaries plead with aching hearts for the means to take the children, at least, from their miserable hovels, where they have no chance of education or of spiritual development. Those already saved have rapidly developed, physically, mentally, and morally, because of proper food, care, and teaching. Will not the wealthy and generous people of England listen to this tale of undeserved suffer- ing and come to our assistance ? Every penny sent to the missionaries is conscientiously expended; work is given where possible, but, alas ! there is little work to give. We ask with full hearts for help to save a starving people.—I am, Sir, &c.,