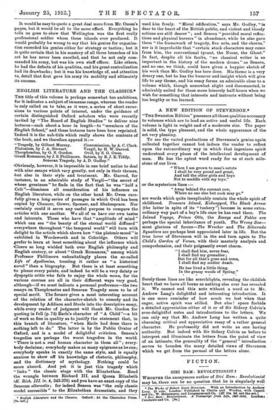 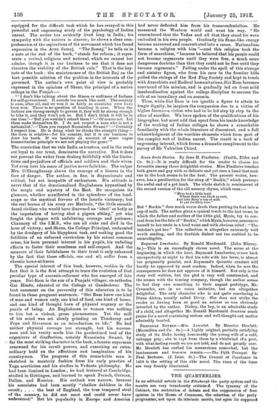 WHOEVER the anonymous author of Siri Ram : Revolutionist may be, there can be no question that be is singularly well • The Works of Robert Louis Stevenson. With an Introduction by Andrew Lang. 25 vols. London : Published by Chatto and Windus, with Cassell and Co., W. Heinemann, and Longman and Co. -6E7 les. Od,, net the set.1 t Stri Rani : Revolutionist. A Transcript from Life, 1907-1910, Loudon: Constable and Co. j6s.] equipped for the difficult task which be has essayed in this

powerful and engrossing study of the psychology of Indian unrest. The writer has evidently lived long in India; his sympathy with the natives is sincere; he shows a clear com- prehension of the aspirations of the movement which has found expression in the Arya Samaj. " The Samaj," he tells us in a note at the end of the book, " stands for reform ; it repre- sents a revival, religious and national, which we cannot but admire, though it is our business to see that it does not threaten the stability of the British rule." That is the key- note of the book : the maintenance of the British Raj as the best possible solution of the problem in the interests of the governed. The author's own point of view is probably expressed in the opinions of Skene, the principal of a native college in the Punjab

"'I don't like talking about the fitness or unfitness of Indians for self-government It sounds too much like cant. The country is ours, after all, and we won it as fairly as countries ever have been won. There is no question of handing it over. When the Indians are strong enough to govern it, they will be strong enough to take it, and they won't ask us. But I don't think it will be in our time.'—'But you wouldn't retard them? Of course not. Let them make themselves fit. I do not respect a man who is not a nationalist.'—`Then you respect Narasimha Swami? '—` Certainly I respect him. He is. doing what he thinks the straight thing— the term is relative—for his country, but it is our business to draw his teeth. If we hesitate on account of some vague humanitarian principle we are not playing the game."

The conviction that we rule India as trustees, and in the main are loyal to our trust, dominates the narrative. But it does not prevent the writer from dealing faithfully with the limita- tions and prejudices of officials and soldiers and their wives. Yet even here his sense of justice never fails him. The vulgar Mrs. O'Shauglinessy shows the courage of a lioness in the face of danger.: The author, in fine, is dispassionate and critical, but not incapable of enthusiasm. His attitude is never that of the denationalized Englishman hypnotized by the magic and mystery of the East. He recognizes its glamour, whether manifested in the splendour of the land- scape or the mystical fervour of the fanatic visionary; but the real heroes of his story are .Merivale, "the little smooth- faced civilian who would have disowned an ideal' as hotly as the imputation of having shot a pigeon sitting," yet who fought the plague with unfaltering courage and patience ; Chauncey of the who ran all risks and died in the hour of victory; and Rene, the College Principal, undaunted by the drudgery of his Sisyphean task, and making good the futilities of an enforced curriculum by his robust common sense, his keen personal interest in his pupils, his unfailing efforts to foster their manliness and self-respect. And the measure of their faithfulness to their trust is only enhanced by the fact that these officials, oue and all, suffer from a chronic home-sickness.

The special interest of this book, however, resides in the fact that it is "the first attempt to trace the evolution of that peculiar type of assassin-reformer who has emerged of late years. Siri-Ram is the son of a Punjabi villager, an orthodox Gat Hindu, educated at the College at Gandeshwar. The best comment on the perversity of this education is to be found in these pregnant sentences : " Siri Ram knew one kind of man and woman only, one kind of food, one kind of house, and one kind of thought born of physical urgency or the puzzle of being. An Englishman or woman was nothing to him but a violent, gross phenomenon. Yet the mill of his mind was set slowly grinding on Thackeray and Pope and Stevenson as an introduction to life." He had neither physical courage nor strength, but his morose- ness and his vanity made him the predestined tool of the organizers of disaffection, notably Narasimha Swami, by • far the most striking character in the book, a fanatic superman renowned for his occult powers, and exercising an extra- ordinary hold on the affections and imagination of his countrymen. The progress of this remarkable man is sketched in masterly ,fashion from his early practice of Yoga asceticism and his studies in Vedanta philosophy. He

had been lionized in London ; he had lectured at Cambridge, studied in Gottingen, and learned to speak French, German, Italian, and Russian. His outlook was narrow, because his associates bad been mostly "shallow dabblers in the occult ; . . . the best of England, the true tempered steel

had never deflected him from his transcendentalism. He measured the Western world and went his way, " He remembered that the Vedas and all that they stood for were- embodied in his own people. Gradually his flame-like energy became narrowed and concentrated into a cause. Nationalism became a religion with him "—and this religion' took the form of anarchism, "because he believed that 'his people could not become regenerate until they were free, a much more dangerous doctrine than that they could not be free until they became regenerate." Falling under the spell of this strange and sinister figure, who from his cave in the frontier hills pulled the strings of the Red Flag Society and kept in touch with Anarchists and Radical humanitarians, Siri Rant becomes convinced of his mission, and is gradually Jed on from mild insubordination against the college discipline to assume the role of an incendiary and an assassin.

Thus, while Siri Ram is too ignoble a figure to attain to. tragic dignity, he inspires the compassion due to a victim of higher forces—a victim who had to be led step by step to the altar of sacrifice. We have spoken of the qualifications of his. biographer, but must add that apart from his inside knowledge of the working of Indian colleges be shows a remarkable familiarity with the whole literature of discontent, and a full acknOwledginent of the worthier elements which form part of the complex web of Indian unrest. The result is a book of engrossing interest, which forms a dramatic complement to the survey of Sir Valentine Chirol.