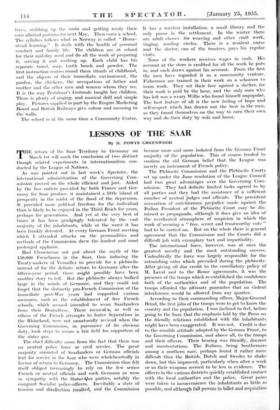 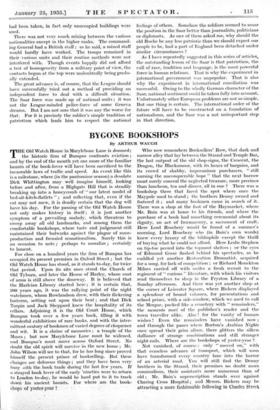 LESSONS OF THE SAAR

THE return of the Saar Territory to Germany on March 1st will mark the conclusion of two distinct though related experiments in internationalism con- ducted by the League of Nations.

As was pointed out in last week's Spectator, the international administration of the Governing Com- mission proved on the whole efficient and just. Aided by the free outlets provided by both France and Ger- many for Saar produce, it maintained a little island of prosperity in the midst of the flood of the depression. It provided more political freedom for the individual than is likely to be enjoyed in the Third Reich for years, perhaps for generations. And yet at the very best of times it has been grudgingly tolerated by the vast majority of the inhabitants, while at the worst it has been frankly detested. At every German Front meeting which I attended attacks on the personalities and methods of the Commission drew the loudest and most prolonged applause.

Had Clemenceau not put about the myth of the 150,000 Frenchmen in the Saar, thus inducing the Treaty-makers of Versailles to provide for a plebiscite instead of for the definite return to Germany after the fifteen-year period, there might possibly have been another story to tell. But the plebiscite always bulked large in the minds of Germans, and they could not forget that the distinctly pro-French Commission of the immediate post-War years had supported various measures, such as the establishment of free French schools, which seemed intended to wean Saarlanders from their Deutschtum. These memories, as well as others of the French attempts to foster Separatism in the Rhineland, were not unnaturally revived when the Governing commission, in pursuance of its obvious duty, took steps to secure a fair field for supporters of the status quo. .

The chief difficulty arose .from the fact that there was no neutral police force or civil service. The great majority consisted of Saarlanders or German officials lent for service in the Saar who were wholeheartedly in favour of return to Germany. The Commission thus felt itself obliged increasingly to rely on the few senior French or neutral officials and such Germans as were in sympathy with the Status-Quo parties, notably the emigrant Socialist police-officers. Inevitably_ a state of tension and disaffection resulted, and the Commission became more and more isolated from the German Front majority of the population. This of course tended to confirm the old German belief that the League was merely an instrument of French policy.

The Plebiscite Commission and the Plebiscite Courts set up under the June resolution of the League Council had two great advantages over the Governing Com- mission. They had definite limited tasks agreed to by all parties and they had the assistance of a sufficient number of neutral judges and officials. The persistent accusation of anti-German prejudice made against the Italian President of the Plebiscite Court may be dis- missed as propaganda, although it does give an idea of the overheated atmosphere of suspicion in which the work of securing a " free, secret and trustworthy vote " had to be carried on. But on the whole there is general agreement that the Commission and the Courts did a difficult job with exemplary tact and impartiality.

The international force, however, was at once the greatest novelty and the most outstanding success. Undoubtedly the force was largely responsible for the astonishing calm which prevailed during the plebiscite. After giving all due credit to the conciliatory policy of M. Laval and to the Rome agreements, it was the presence of the troops which re-established the confidence both of the authorities and of the population. The troops afforded the ultimate guarantee that no violent interference would be allowed from any quarter.'

According to their commanding officer, Major-General Brind, the first jobs of the troops were to get to know the country and the population. I was inclined to feel, before going to the Saar, that the emphasis laid by the Press 'on the friendly relations established with the inhabitants might have been exaggerated. It was not. Credit is due to the sensible attitude adopted by the German Front, to the Governing Commission, and above all, to the troops and their officers. Their bearing was friendly, discreet and unostentatious. The Italians, being Southerners among a northern race, perhaps found it rather more difficult than the British, Dutch and Swedes to shake down, but this improved, particularly when after a week or so their weapons seemed to be less in evidence. The officers in the various districts quickly established contact with the local authorities and the police. Great pains were taken to inconvenience the inhabitants as little as possible, and although full powers to billet and requisition had been taken, in fact only unoccupied buildings were used.

There was not very much mixing between the various nationalities except in the higher ranks. The command- ing General had a British staff ; as he said, a mixed staff would hardly have worked. The troops remained in their various units and their routine methods were not interfered with. Though events happily did not afford a test of homogeneity from a military point of view, the contacts begun at the top were undoubtedly being gradu- ally extended.

The great advance is, of course, that the League should have successfully tried out a method of providing an independent force to deal with a difficult situation. The Saar force was made up of national units ; it was not the League-minded police-force of some Geneva dreams. But I am not sure that it was any the worse for that. For it is precisely the soldier's simple tradition of patriotism which leads him to respect the national feelings of others. Somehow the soldiers seemed to sense the position in the Saar better than journalists, politicians or diplomats. As one of them asked me, why should the old B oche be any less patriotic than we should expect our people to be, had a part of England been detached under similar circumstances ?

As I have repeatedly suggested in this series of articles, the outstanding lesson of the Saar is that patriotism, the call of race, tradition and language, is the most powerful force in human relations. That is why the experiment in international government was unpopular. That is also why the experiment in international conciliation was successful. Owing to the wholly German character of the Saar, national sentiment could be taken fully into account. Unfortunately other European problems are not so simple. But one thing is certain. The international order of the future will have to be constructed on a foundation of nationalisms, and the Saar was a not unimportant step in that direction.