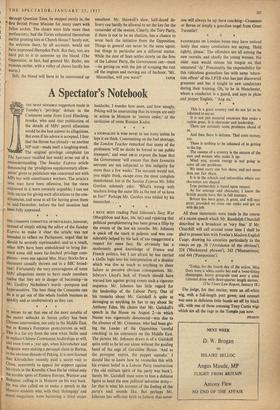 I RAVE BEEN reading Paul Johnson's Suez War (Macgibbon and

Kee, 10s. 6d.) and rejoicing that political pamphleteering has been given a fillip by the events of the last six months. Mr. Johnson is quick off the mark in polemic and was con- siderably helped by his lack of too exaggerated a respect for mere fact. He obviously has a moderately good knowledge of France and French politics, but I am afraid he has carried a Gallic logic into his interpretation of a disaster which was due as much as anything to sheer failure to perceive obvious consequences. Mr. Selwyn's Lloyd's lack of French should have warned him against giving events such a rigorous sequence. Mr. Johnson has little regard for the leadership of the Labour Party. One of his remarks about Mr. Gaitskell is quite as damaging as anything he has to say about Sir Anthony Eden. He claims that Mr. Gaitskell's speech in the House on August 2—in which Nasser was vigorously denounced—was due to the absence of Mr. Crossman, who had been giv- ing the Leader of the Opposition, 'careful coaching' in his utterances on the Middle East. The picture Mr. Johnson draws is of a Gaitskell quite unfit to be let out alone without the guiding hand of the sage of Geraldine House. 'And as the prompter moves, the puppet squeaks.' I should like to know how he reconciles this with his evident belief in a Labour Party resurrection ('the old militant spirit of the party was back'). Surely Mr. Gaitskell must seem to him a dubious figure to head the new political salvation army— for that is what his account of the finding of the party's soul sounds like. But perhaps Mr. Johnson has sufficient faith to.believe that some- one will always be up there coaching—Crossman or Bevan or simply a guardian angel from Great Turnstile?