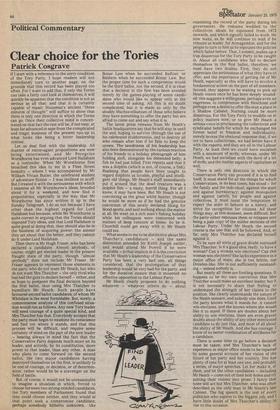 Clear choice for the Tories

If I start with a reference to the sorry condition of the Tory Party, I hope readers will not immediately turn to another page, on the grounds that this record has been played too often. For I want to add that, if only the Tories can take a fairly cool look at themselves, it will quickly be apparent that the condition is not as serious as all that; and that it is certainly capable of repair. Housman's ancient "three minutes of thought" will suffice to show that there is only one direction in which the Tories can go. Once their collective mind is concentrated on that fact the rest will be, if not easy, at least far advanced in ease from the complicated and tragic business of the present run-up to what looks like being a bitter leadership contest.

Let us deal first with the leadership. All manner of extravagant propositions are now being entertained, and Mr Peregrine Worsthorne has even advanced Lord Hailsham as a contender. When Mr Worsthorne first broached this idea to me in a Fleet Street hostelry — where I was accompanied by Mr William Vivian Butler, the celebrated student of adventure fiction — I was inclined to scoff. But I treated it with the seriousness with which I examine all Mr Worsthorne's ideas, brooded about it for a weekend, and now find it preposterous, especially in the way that Mr Worsthorne has since written it up in the Sunday Telegraph. I do so not because I have other than the highest regard for Lord Hailsham but because, while Mr Worsthorne is quite correct in arguing that the Tories should expound Tory ideas, and that Lord Hailsham is quite good at doing that, they should also be in the business of acquiring power: the sooner they set about that the better, and they cannot do it under Lord Hailsham.

Then there is Mr Hugh Fraser, who has been declared a candidate. Almost anybody, of course, might get elected leader in the present fraught state of the party, though "almost anybody" does not include Mr Fraser. Mr Fraser appears to represent those elements in the party who do not want Mr Heath, but who do not want Mrs Thatcher — the only rival who has had the guts to declare herself — either, and so hope to postpone the final decision beyond the first ballot, thus using Mrs Thatcher to humiliate Mr Heath. Such people have favoured second ballot candidates, of whom Mr Whitelaw is the most formidable. But, surely, a commonsense analysis of this confused situation would run as follows. Any new Tory leader will need courage of a quite special kind, and Mrs Thatcher has that. Everybody accepts that the party must begin.to examine its conscience and find out where it stands, and that this process will be difficult, and require some certainty of mind on the part of the new leader — bearing always in mind the fact that the Conservative Party depends much more on its leader, and accords, by its constitution, more power to that leader, than any other. A man who plans to come forward on the second ballot, the two major candidates having destroyed themselves on the first, is unlikely to be one of courage, or decision, or of determination: rather would he be a scavenger on the field of battle.

But, of course, it would not be unreasonable to imagine a situation in which, forced to choose between two strong-minded candidates, the Tory members of Parliament found that they could choose neither, and they would at that point seek a compromise candidate, perhaps somebody hitherto unknown, like Bonar Law when he succeeded Balfour, or Baldwin when he succeeded Sonar Law. But the proper time for such a compromise would be the third ballot, not the second, if it is clear that a decision in the first has been avoided merely by the games-playing of some candidates who would like to appear only at the second time of asking. All this is no doubt complicated, but it is made so only by the shoddy Machiavellianism of those who believe they have something to offer the party but are afraid to come out and say what it is.

The latest press releases from Mr Heath's battle headquarters say that he will stay in until the end, hoping to survive through the use of his celebrated stubbornness, and to destroy all who remain after him if he fails to keep the crown. The tawdriness of his leadership has also been demonstrated by the curious reaction of his friends to a holiday photograph of him holding aloft, alongside his distended belly, a fish he had just killed. First reports said that it was a dolphin (which is not, of course, a fish). Realising that people have been taught to regard dolphins as lovable, playful and intelligent old things, Mr Heath's staff immediately put it around that the dead creature was a dolphin fish — a nasty, horrid thing. For all I know, it may have been. But Mr Heath is not convincing as the great white hunter, though he would be more so if he had the genuine conviction of this newly declared liking for blood sports, and said nothing about the matter at all. He went on a rich man's fishing holiday while his colleagues were concerned with matters of deep concern at home. So be it. Churchill could get away with it; Mr Heath could not.

What seems to me to be distinctive about Mrs Thatcher's candidature — and the same distinction attended Sir Keith Joseph earlier, and would attend Mr Powell if he were available — is that implicit in it is the conviction that Mr Heath's leadership of the Conservative Party has been a very bad one, all things considered; that the prolongation of that leadership would be very bad for the party, and for the duration ensure that it mounted no effective opposition to the Labour Party. Mr Heath clearly proposes to do nothing whatever — whatever others do — about examining the record of the party during his government. He remains wedded to the collectivist ideals he espoused from 1972 onwards, and which signally failed to work. He now waits, as he will continue to wait if he remains as leader, for Armageddon, and for the people to turn to him as he espouses the policies which failed before. That, I submit, makes up a trap disastrous for the Tory Party to be caught in. About all candidates who fail to declare themselves in the first ballot, therefore, we must have two doubts. First, they do not appreciate the seriousness of what they have to offer, and the importance of getting rid of Mr Heath, especially as this will have to involve a fundamental action on the part of all members. Second, they appear to be waiting to pick up Heath voters once he has been deeply wounded: this suggests a willingness, perhaps even an eagerness, to compromise with Heathism and perhaps even a desire to offer the man a place in a Shadow Cabinet. Nothing could be more disastrous. For the Tory Party to muddle on in policy matters now, or to give Mr Heath a serious voice in proclaiming the collectivist and syndicalist beliefs for which he exchanged his former belief in freedom and individuality, merely invites the electoral response that, if we are to have collectivism, we had better have it with the experts, and they are all in the Labour Party. At least then we could have socialism with a minimum of strife; whereas, under Mr Heath, we had socialism with the devil of a lot of strife, and the nastier aspects of capitalism as well.

There is only one direction in which the Conservative Party can proceed if it is to find itself. It must stand for all the things for which Conservatism, in its best times, has stood — for the family and the individual; against the state and against bureaucracy; against monopolies and against cartels; for people and against collectives. It must resist the temptation to expect the state to behave as a nanny, and strive for recognition for citizens. All these things may, at this moment, seem difficult. But the party either espouses them or relapses into being a.pale copy of the milder sections of the Labour Party, Under Mr Heath the second course is the one that will be followed. And, so far, only Mrs Thatcher has declared herself against it.

To be sure all sorts of grave doubt surround Mrs Thatcher. Is it a good idea, really, to have a woman? Can a woman win elections? Can this woman win elections? She lacks experience in a major office of state; she is too brittle, too Dresden-like. She is not sufficiently outstanding — indeed nobody is.

But nearly all these are footling questions. It happens to be my own conviction that Mrs Thatcher would make an excellent leader, but it is not necessary to share that feeling to • understand the strength of her claims to the position. She clearly understands the nature of the Heath menace, and nobody else does. Until the party knows what it stands for, it cannot win elections, and she knows where she would like it to stand. If there are doubts about her ability to win elections, there are even graver doubts about the ability of any other mentioned candidate to do just that, and most of all about the ability of Mr Heath. And she has courage. I know of no better combination of attributes for a candidate.

There is some time to go before a decision must be taken, and Mrs Thatcher's lack of experience in major office needs to be repaired by some general account of her vision of the future of her party and her country. She has plenty of time for at least one one, and probably a series, of major speeches. Let her make it, or them, and let the other candidates — including Mr Heath — come out of their bolt-holes and try putting their visions into prose. I fancy that none will act but Mrs Thatcher, who was often described as the only man in Mr Heath's late Cabinet. The big speech is the test of every politician who aspires to the biggest job; and I have little doubt of Mrs Thatcher's ability to rise to this occasion.