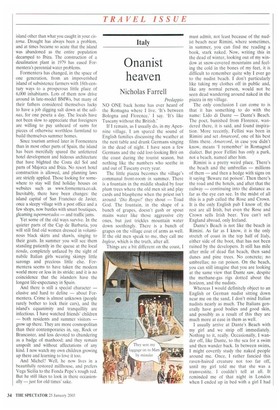 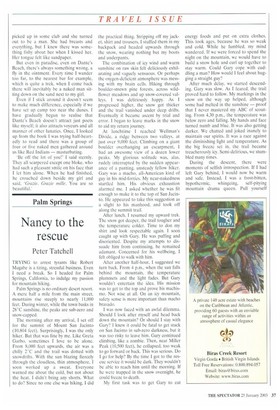 Predappio NO ONE back home has ever heard of the Romagna where I live. 'It's between Bologna and Florence,' I say. 'It's like Tuscany without the British.'

If! remain, as I usually do, in my Apennine village, I am spared the sound of English families discussing the weather at the next table and drunk Germans singing in the dead of night. I have seen a few Germans and the odd lost-looking Brit on the coast during the tourist season, but nothing like the numbers who seethe in and out of Tuscany every year.

The little piazza becomes the village's communal front-room in summer. There is a fountain in the middle shaded by four plum trees where the old men sit and play cards and blaspheme when the priest isn't around 'Di° Rospe they shout — Toad God. The fountain, in the shape of a bunch of grapes, doesn't gush or spout mains water like those aggressive city ones, but just trickles mountain water down soothingly. There is a bunch of grapes on the village coat of arms as well. If the old men speak to me, they call me Inglese, which is the truth, after all.

Things are a bit different on the coast, I must admit, not least because of the nudist beach near Rimini, where sometimes, in summer, you can find me reading a book, stark naked. Now, writing this in the dead of winter, looking out of my window at snow-covered mountains and feeling the cold in the bones of my feet, it is difficult to remember quite why I ever go to the nudist beach. I don't particularly like taking my clothes off in public and, like any normal person, would not be seen dead wandering around naked in the piazza in my village.

The only conclusion I can come to is that it has something to do with the name: Lido di Dante — Dante's Beach. The poet, banished from Florence, wandered there, it is said, and found inspiration. More recently, Fellini was born in Rimini and set Amarcord, one of his best films there. Amarcord, in case you didn't know, means 'I remember' in Romagnol dialect. But poor Fellini has only a park, not a beach, named after him.

Rimini is a pretty weird place. There's the beach and the umbrellas — millions of them — and then a hedge with signs on it saying 'Beware rat poison'. Then there's the road and the hotels, and after that the railway — continuing into the distance as far as the eye can see. In the midst of all this is a pub called the Rose and Crown. It is the only English pub I know of; the rest are all Irish, but even the Rose and Crown sells Irish beer. You can't sell England abroad, only Ireland.

Dante's Beach is not like the beach in Rimini. As far as I know, it is the only stretch of coast in the top half of Italy, either side of the boot, that has not been ruined by the developers. It still has mile after mile of dead flat beach, then sand dunes and pine trees. No concrete; no umbrellas; no rat poison. On the beach, you can still imagine that you are looking at the same view that Dante saw, despite the methane-gas rigs dotted about the horizon, and the nudists.

Whereas I would definitely object to an English or German nudist sitting down near me on the sand, I don't mind Italian nudists nearly as much. The Italians generally have good bodies and good skin, and possibly as a result of this they are much more at ease in them as well.

I usually arrive at Dante's Beach with my girl and we strip off immediately. Nothing to it, really. Occasionally, I wander off, like Dante, to the sea for a swim and then wander back. In between swims, I might covertly study the naked people around me. Once, I rather fancied this raven-haired creature not too far off, until my girl told me that she was a transvestite. I couldn't tell at all. It reminded me of that night in London when I ended up in bed with a girl I had

picked up in some club and she turned out to be a man. She had breasts and everything, but I knew there was something fishy about her when I kissed her. Her tongue felt like sandpaper.

But even in paradise, even on Dante's Beach, there's always something wrong, a fly in the ointment. Every time I wander too far, to the nearest bar for example, which is quite a trek, when I come back there will inevitably be a naked man sitting down on the sand next to my girl.

'Be off the lot of you!' I said sternly. They all scarpered except one bloke, who had such a pleasant smile on his face that I let him alone. When he had finished, he crouched down beside my girl and said. `Grazie. Grazie mile. You are so beautiful,'