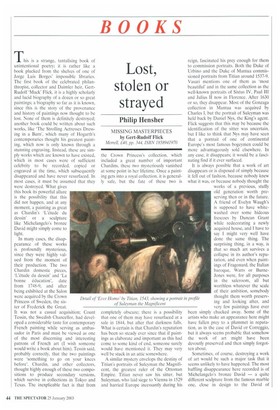 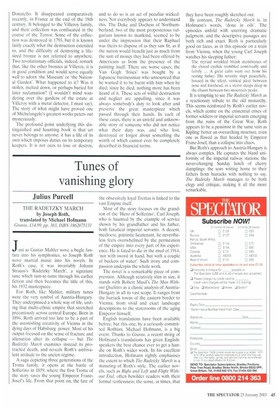 Merrell, £40, pp. 344, ISBN 1858941970 his is a strange, tantalising book of unintentional poetry; it is rather like a book plucked from the shelves of one of Jorge Luis Borges' impossible libraries. The first book of the celebrated philanthropist, collector and Daimler heir, GertRudolf 'Muck' Flick, it is a highly scholarly and lucid biography of a dozen or so great paintings; a biography so far as it is known, since this is the story of the provenance and history of paintings now thought to be lost. None of them is definitely destroyed; another book could be written about such works, like The Strolling Actresses Dressing in a Barn', which many of Hogarth's contemporaries thought his greatest painting, which now is only known through a stunning engraving. Instead, these are simply works which are known to have existed, which in most cases were of sufficient celebrity to be recorded, copied or engraved at the time, which subsequently disappeared and have never resurfaced. In most cases, it must be assumed that they were destroyed. What gives this book its powerful allure is the possibility that this did not happen, and at any moment, a painting as great as Chardin's `L'etude du dessin' or a sculpture like Michelangelo's bronze David might simply come to light.

In many cases, the disappearance of these works is profoundly mysterious, since they were highly valued from the moment of their production. The two Chardin domestic pieces, `L'etude du dessin' and 'La bonne education', date from 1748-9, and after being exhibited at the Salon were acquired by the Crown Princess of Sweden, the sister of Frederick the Great. It was not a casual acquisition; Count Tessin, the Swedish Chancellor, had developed a considerable taste for contemporary French painting while serving as ambassador in Paris and must be viewed as one of the most discerning and interesting patrons of French art (I wish someone would write a book about him). Tessin said, probably correctly, that the two paintings were 'something to go on your knees before'. Chardin, and other collectors, thought highly enough of these two compositions to produce secondary versions, which survive in collections in Tokyo and Texas. The inexplicable fact is that from the Crown Princess's collection, which included a great number of important Chardins, these two mysteriously vanished at some point in her lifetime. Once a painting gets into a royal collection, it is generally safe, but the fate of these two is completely obscure; there is a possibility that one of them may have resurfaced at a sale in 1844, but after that darkness falls. What is certain is that Chardin's reputation has been so steady ever since that if paintings as elaborate and important as this had come to some kind of end, someone surely would have mentioned it. They may very well be stuck in an attic somewhere.

A similar mystery envelops the destiny of Titian's portraits of Suleyman the Magnificent, the greatest ruler of the Ottoman Empire. Titian never saw his sitter, but Suleyman, who laid siege to Vienna in 1529 and harried Europe incessantly during his reign, fascinated his prey enough for them to commission portraits. Both the Duke of Urbino and the Duke of Mantua commissioned portraits from Titian around 1537-9. Vasari mentions one of them as 'most beautiful' and in the same collection as the well-known portraits of Sixtus IV, Paul III and Julius II now in Florence. After 1630 or so, they disappear. Most of the Gonzaga collection in Mantua was acquired by Charles I, but the portrait of Suleyman was held back by Daniel Nys, the King's agent. Flick suggests that this may be because the identification of the sitter was uncertain, but I like to think that Nys may have seen that a portrait of one of continental Europe's most famous bogeymen could be more advantageously sold elsewhere. In any case, it disappears; it would be a fascinating find if it ever surfaced.

It is always possible that a work of art disappears or is disposed of simply because it fell out of fashion, because nobody knew what it was, or because nobody thought the works of a previous, stuffy old generation worth preserving then or in the future. A friend of Evelyn Waugh's is supposed to have whitewashed over some hideous frescoes by Duncan Grant while redecorating a newly acquired house, and I have to say I might very well have done the same thing. The surprising thing, in a way, is that so much art survives a collapse in its author's reputation, and even when paintings of Fragonard, the Italian baroque, Watts or BurneJones were, for all purposes in the saleroom, all but worthless whatever the scale of their ambition, somebody thought them worth preserving and looking after, and very few paintings have ever been simply chucked away. Some of the artists who make an appearance here might have fallen prey to a plummet in reputation, as in the case of David or Correggio, but it always seems probable that somehow the work of art might have been devoutly preserved and then simply forgotten about.

Sometimes, of course, destroying a work of art would be such a major task that it seems unlikely to have happened. The most baffling disappearance here recorded is of Michelangelo's bronze David — a quite different sculpture from the famous marble one, close in design to the David of Donatello. It disappeared comparatively recently, in France at the end of the 18th century, It belonged to the Villeroy family, and their collection was confiscated in the course of the Terror. Some of the collection was destroyed in 1793, but it is known fairly exactly what the destruction extended to, and the difficulty of destroying a lifesized bronze is not referred to anywhere. Two revolutionary officials, indeed, remark that, like the other bronzes at Villeroy, it is in good condition and would serve equally well to adorn 'the Museum' or 'the National Garden'. What happened to it? Was it stolen, melted down, or perhaps buried for later reclamation? (I wouldn't mind wandering over the gardens of the estate at Villeroy with a metal detector, I must say). The story of what might have proved one of Michetangelo's greatest works peters out mysteriously.

The profound point underlying this distinguished and haunting book is that art never belongs to anyone: it has a life of its own which imposes duties on its temporary keepers. It is not ours to lose or destroy,

and to do so is an act of peculiar wickedness. Not everybody appears to understand this. The Duke and Duchess of Northumberland, two of the most proposterous vulgarians known to mankind, seemed to be under the impression that their Raphael was theirs to dispose of as they saw fit, as if the nation would benefit just as much from the sum of money they had been offered by Americans as from the presence of the painting itself. There are worse cases; the Van Gogh 'Irises' was bought by a Japanese businessman who announced that he wanted it to be burnt with him when he died; since he died, nothing more has been heard of it. These acts of wilful destruction and neglect are appalling, since it was always somebody's duty to look after and preserve the great masterpiece which passed through their hands. In each of these cases, there is an untold and unknowable story of someone who did not notice what their duty was, and who lost, destroyed or forgot about something the worth of which cannot ever be completely described in financial terms.