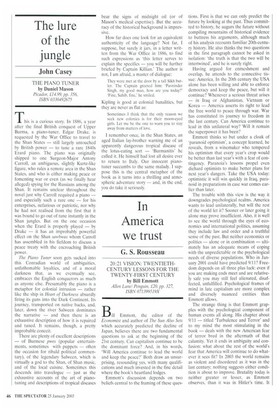 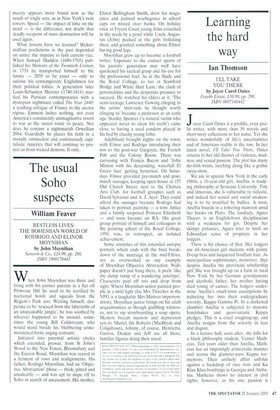 In America we trust

20:21 VISION: TWENTIETHCENTURY LESSONS FOR THE TWENTY-FIRST CENTURY by Bin Emmott Allen Lane/ Penguin, £20, pp. 327, ISBN 071399519X Bill Emmott. the editor of the Economist and author of The Sun Also Sets which accurately predicted the decline of Japan, believes there are two fundamental questions to ask at the beginning of the 21st century. Can capitalism continue to be the dominant force? And, in his words, 'Will America continue to lead the world and keep the peace?' Both draw an unsurprising, resounding yes, with many qualifications and much invested in the fine detail where the book's heartland lodges.

tions. First is that we can only predict the future by looking at the past. Thus committed to history, he augurs the future without compiling mountains of historical evidence to buttress his arguments, although much of his analysis recounts familiar 20th-century history. He also thinks the two questions in the first paragraph cannot be asked in isolation: 'the truth is that the two will be intertwined', and he is surely right.

Having argued for enmeshment and overlap, he attends to the connective tissue: America. In the 20th century the USA alone has been willing and able to enforce democracy and keep the peace, but will it continue? Whenever a serious threat arises — in Iraq or Afghanistan, Vietnam or Korea — America asserts its right to lead the free world to peace through war_ War has constituted its journey to freedom in the last century. Can America continue to lead in this unilateral way? Will it remain the superpower it has been?

Emmott thinks so but under a cloak of 'paranoid optimism', a concept learned, he reveals, from a winemaker who tempered his optimism that every year's crop would be better than last year's with a fear of contingency. Paranoia's lessons propel even diehard optimists to make better plans for next year's dangers. Take the USA today: optimistic it will win quickly in Iraq, paranoid in preparations in case war comes earlier than later.

The trouble with this view is the way it downgrades psychological realms. America wants to lead unilaterally, but will the rest of the world let it? Sooner or later going it alone may prove insufficient. Also, it is well to see the world through the eyes of economics and international politics, assuming they include law and order and a truthful sense of the past. But neither economics or politics — alone or in combination — ultimately has an adequate means of coping with the unpredictable or the psychological needs of diverse populations. Who in January 2001 could have predicted 9/11? Freedom depends on all three plus luck: even if you are making ends meet and are relatively safe you may still feel alienated, disaffected, unfulfilled. Psychological frames of mind in late capitalism are more complex and diversely nuanced entities than Emmott allows.

The strange thing is that Emmott grapples with the psychological component of human events all along. His chapter about 9/11 — titled 'Turbulence and Terror' and to my mind the most stimulating in the book — deals with the new American fear of terror bred in the aftermath of that calamity. Yet it ends in ambiguity and confusion: what about the rest of the world's fear that America will continue to do whatever it sees fit? In 2003 the world remains as violent and disordered as it was in the last century; nothing suggests either condition is about to improve. Brutality today is neither greater or lesser, as Emmott observes, than it was in Hitler's time. It merely appears more brutal now as the result of single acts, as in New York's twin towers. Speed — the impact of time on the mind — is the difference, not doubt that deadly weapons of mass destruction will be used again.

What lessons have we learned? Bickerstaffian predictions in the past depended on satire: the impulse to lash current vice. When Samuel Madden (1686-1765) published his Memoirs of the Twentieth Century in 1733 he transported himself to the future — 2035 to be exact — only to satirise his contemporary Englishmen for their political follies, A generation later Louis-Sebastien Mercier (1740-1814) startled his Parisian contemporaries with a dystopian nightmare called The Year 2440: a scathing critique of France in the ancien regime. Emmott lashes nothing, not even America's consistently unimaginative resort to war as the surest route to peace. Nor does he conjure a nightmarish Orwellian 2084. Guardedly he places his faith in a morally omniscient and continuously capitalistic America that will continue to protect us from wicked demons. If only.