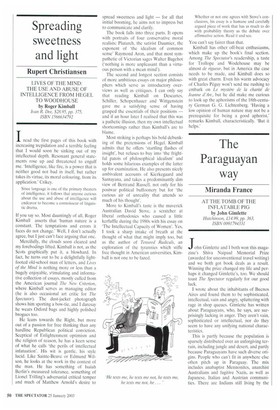 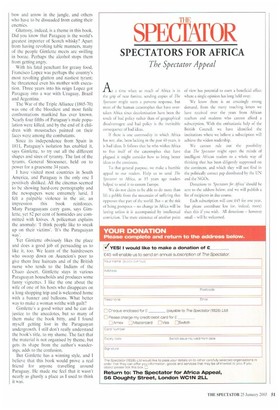 AT THE TOMB OF THE INFLATABLE PIG by John Gimlette Hutchinson, .£14.99, pp. 363, ISBN 0091794331 John Gimlette and I both won this magazine's Shiva Naipaul Memorial Prize (awarded for unconventional travel writing) and we both got book deals as a result. Winning the prize changed my life and perhaps it changed Gimlette's, too. We should toast The Spectator regularly for our good luck.

I wrote about the inhabitants of Buenos Aires and found them to be sophisticated, intellectual, vain and angry, spluttering with rage in shop queues. Gimlette has written about Paraguayans, who, he says, are surprisingly lacking in anger. They aren't vain, sophisticated or intellectual, nor do they seem to have any unifying national characteristics.

This is partly because the population is sparsely distributed over an unforgiving terrain, including jungle and desert, and partly because Paraguayans have such diverse origins. People who can't fit in anywhere else often pitch up in Paraguay. The mix includes anabaptist Mennonites, anarchist Australians and fugitive Nazis, as well as Japanese, Italian and Austrian communities. There are Indians still living by the bow and arrow in the jungle, and others who have to be dissuaded from eating their enemies.

Gluttony, indeed, is a theme in this book. Did you know that Paraguay is the world's greatest importer of Scotch whisky? Apart from having revolting table manners, many of the people Gimlette meets are swilling in booze. Perhaps the alcohol stops them from getting angry.

With his fatal penchant for greasy food, Francisco Lopez was perhaps the country's most revolting glutton and nastiest tyrant; he threatened even his mother with execution. Three years into his reign Lopez got Paraguay into a war with Uruguay, Brazil and Argentina.

The War of the Triple Alliance (1865-70) was one of the bloodiest and most futile confrontations mankind has ever known. Nearly four fifths of Paraguay's male population were killed, and by the end of it children with moustaches painted on their faces were among the combatants.

Since its independence from Spain in 1811, Paraguay's isolation has enabled it, says Gimlette, to try out all the different shapes and sizes of tyranny. The last of the tyrants. General Stroessner, held on to power for a gruesome 34 years.

I have visited most countries in South America, and Paraguay is the only one I positively disliked. All the cinemas seemed to be showing hard-core pornography and the newspapers were extremely lurid. I felt a palpable violence in the air, an

impression this book reinforces. Many Paraguayans carry guns, says Gimlette, yet 82 per cent of homicides are committed with knives. A policeman explains the anomaly: 'I think people like to sneak up on their victims'. It's the Paraguayan way'.

Yet Gimlette obviously likes the place and does a good job of persuading us to like it, too. We learn of the hairdressers who swoop down on Asuncion's poor to give them free haircuts and of the British nurse who tends to the Indians of the Chaco desert. Gimlette stays in various Paraguayan households and produces some funny vignettes. I like the one about the wife of one of his hosts who disappears on a long shopping trip and is welcomed home with a banner and balloons. What better way to make a woman writhe with guilt?

Gimlette's a good writer and he can do justice to the anecdotes, but so many of them make the book bitty, and I found myself getting lost in the Paraguayan undergrowth. I still don't really understand the book's title, to my shame. The fact that the material is not organised by theme, but gets its shape from the author's wanderings, adds to the confusion.

But Gimlette has a winning style, and I believe that this book would prove a real friend for anyone travelling around Paraguay. He made me feel that it wasn't nearly as ghastly a place as I used to think it was.