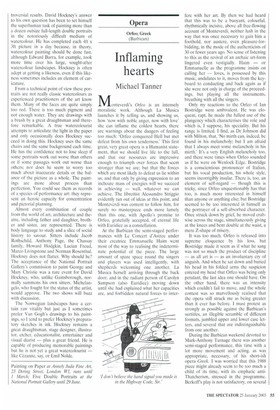 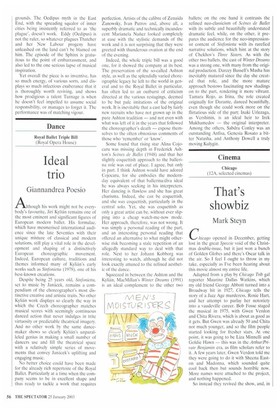 Monteverdi's Orfeo is an intensely moralistic work. Although La Musica launches it by telling us, and showing us, how 'now with noble anger, now with love' she can inflame the coldest hearts, there are warnings about the dangers of feeling too much: 'Orfeo conquered Hell but met defeat from his own tenderness.' This first great, very great opera is a Humanist statement, that we should live life to the full, and that our resources are impressive enough to triumph over forces that seem stronger than we are; but that the forces which are most likely to defeat us lie within us, and that only by giving expression to an inchoate mass of energies will we succeed in achieving — well, whatever we can achieve. The librettist Alessandro Striggio evidently ran out of ideas at this point, and Monteverdi was content to follow him, for surely no masterpiece ends more lamely than this one, with Apollo's promise to Orfeo, gratefully accepted, of eternal life with Euridice as a constellation.

At the Barbican the semi-staged performances with Le Concert d'Astree under their creatrice Emmanuelle Haim went most of the way to realising the indeterminate potential of the piece. The large amount of spare space round the singers and players was used intelligently, with shepherds welcoming one another. La Musica herself arriving through the back door, and in the radiant person of Carolyn Sampson (also Euridice) moving down until she had explained what her capacities are. and forbidden natural forces to inter fere with her art. By then we had heard that this was to be a buoyant, colourful, rhythmically incisive, above all free-flowing account of Monteverdi, neither lush in the way that was once necessary to gain him a foothold, nor austere, even pleasure-forbidding, in the mode of the authenticists of 30 or fewer years ago. No sense of listening to this as the revival of an archaic art-form lingered even vestigially. Haim — or Emmanuelle as the programme insists on calling her — loves, is possessed by this music, undulates to it, moves from the keyboard to conducting and back again as if she were not only in charge of the proceedings, hut playing all the instruments, breathing with all the singers.

Only my reactions to the Orfeo of Ian Bostridge were ambivalent. He was eloquent, rapt, he made the fullest use of the plangency which characterises the role and which is, I suppose, his speciality. But his range is limited. I find, as Dr Johnson did with Milton, that, 'No mirth can, indeed, be found in his melancholy; but I am afraid that I always meet some melancholy in his mirth.' It's a very English melancholy too, and there were times when Orfeo sounded as if he were on Wenlock Edge. Bostridge is a conscientious pronouncer of Italian, but his vocal production, his whole style, seems incorrigibly insular. There is, too, an

element of self-regard though this is tricky, since Orfeo unquestionably has that too, is much more interested in himself than anyone or anything else; but Bostridge seemed to be too interested in himself as the portrayer of a self-absorbed character. Once struck down by grief, he moved crabwise across the stage, simultaneously giving at the knees and bent double at the waist, a mere 7-shape of misery.

It was too much. Orfeo is released into supreme eloquence by his loss, but Bostridge made it seem as if what he sang was not so much the product of discipline — as all art is — as an involuntary cry of anguish. And when he sat down and buried his head in his folded arms the suspicion entered my head that Orfeo was being only petulant, the last idea one should have. On the other hand, there was an intensity which couldn't fail to move, and the whole context was so marvellously realised that the opera still struck rne as being greater than it ever has before. I must protest as strongly as possible against the Barbican's surtitles, an illegible scramble of different formats, jumbled upper and lower case letters, and several that are indistinguishable from one another.

During the Barbican weekend devoted to Mark-Anthony Turnage there was another semi-staged performance, this time with a lot more movement and acting, as was appropriate, necessary, of his short-ish opera Greek. I was worried that this 1988 piece might already seem to be too much a child of its time, with its emphatic antiThatcherism, stressed in the programme. Berkoffs play is not satisfactory, on several grounds. The Oedipus myth in the East End, with the spreading squalor of inner cities being insistently referred to as the plague', doesn't work. Eddy (Oedipus) is not the ruler, so whatever plagues Thatcher and her New Labour progeny have unleashed on the land can't be blamed on him. The episode of the Sphinx is gratuitous to the point of embarrassment, and also led to the one serious lapse of musical inspiration.

Yet overall the piece is so inventive, has so much energy, of various sorts, and displays so much infectious exuberance that it is thoroughly worth reviving, and shows how prodigious a talent Turnage is when he doesn't feel impelled to assume social responsibility, or manages to forget it. The performance was of matching vigour.