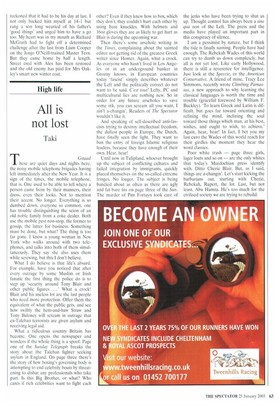 All is not lost

hese are quiet days and nights here, the noisy mobile telephone brigades having left immediately after the New Year. It is a sign of the times, the mobile telephone, that is. One used to be able to tell where a person came from by their manners, their dress, even their looks. Not to mention their accent. No longer. Everything is so dumbed down, everyone so common, one has trouble distinguishing the scion of an old noble family from a coke dealer. Both use the mobile pest non-stop, the former to gossip, the latter for business. Something must be done, but what? The thing is too far gone. I know a young woman in New York who walks around with two telephones, and talks into both of them simultaneously. They say she also uses them while screwing, but this I don't believe.

What I do believe is that life's absurd. For example, have you noticed that after every outrage by some Muslim or Irish fanatic the first thing the police do is to step up 'security around Tony Blair and other public figures ... ' What a crock! Blair and his useless lot are the last people who need more protection. Offer them the equivalent of what the public gets, and see how swiftly the hem-and-haw Straw and Tony Baloney will scream in outrage that ex-Taleban terrorists are given asylum and receiving legal aid.

What a ridiculous country Britain has become. One opens the newspaper and wonders if the whole thing is a spoof. Page one of the Sunday Telegraph breaks the story about the Taleban fighter seeking asylum in England. On page three there's the story of how boxing's governing body is attempting to end celebrity bouts by threatening to disbar any professionals who take part. Is this Big Brother, or what? Who cares if rich celebrities want to fight each other? Even if they knew how to box, which they don't, they couldn't hurt each other by using bare knuckles. With helmets and 16oz gloves they are as likely to get hurt as Blair is during the upcoming war.

Then there's some arsehole writing in the Times, complaining about the sainted editor not getting rid of the greatest Greek writer since Homer. Again, what a crock. As everyone who hasn't lived in Los Angeles or in an underground bunker in Grozny knows, in European countries today 'fascist' simply describes whatever the Left and the politically correct do not want to be said. C'est tout! Lefty, PC and multicultural lies are nothing new. So in order for any future arseholes to save some ink, you can scream all you want, I ain't a-changin'. Readers of The Spectator wouldn't like it.

And speaking of self-described anti-fascists trying to destroy intellectual freedom, the dullest people in Europe, the Dutch, have finally seen the light. They want to ban the entry of foreign Islamic religious leaders, because they have enough of their own. Hear, hear!

Until now in Tulipland, whoever brought up the subject of conflicting cultures and failed integration by immigrants, quickly placed themselves on the so-called extreme fringes. No longer. The subject is being bandied about as often as there are ugly and fat bare tits on page three of the Sun. The murder of Pim Fortuyn took care of the jerks who have been trying to shut us up. Thought control has always been a sine qua non of the Left. The press and the media have played an important part in this conspiracy of silence.

am a pessimist by nature, but [think the tide is finally turning. People have had enough. The Rebekah Wades of this world can try to dumb us down completely, but all is not yet lost. Like early Hollywood, there is still a reverence for intelligence. Just look at the Speccie, or the American Conservative, A friend of mine, Tracy Lee Simmons, recently wrote Climbing Parnassus, a new approach to why learning the classical languages is worth the time and trouble (graceful foreword by William F. Buckley). `To learn Greek and Latin is difficult, but goes far toward orienting and refining the mind, inclining the soul toward those things which man, at his best, wishes, and ought to wish, to achieve.' Again, hear, hear! In fact, I bet you my last euro the Wades of this world reach for their girdles the moment they hear the word classics.

Poor white trash — page three girls, lager louts and so on — are the only whites that today's Murdochian press identify with. Ditto Cherie Blair. But. as I said, things are a-changin'. Let's start kicking the barbarians out, starting with Cherie, Rebekah, Rupert, the lot. Last, but not least, Abu Hamza. He's too much for the civilised society we are trying to rebuild.