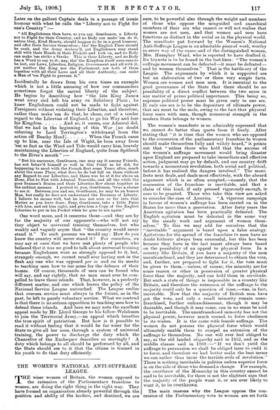 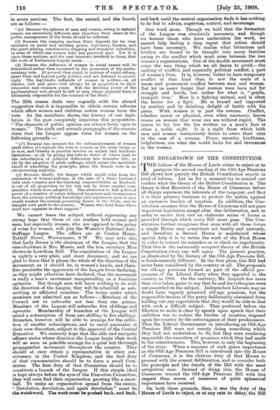 the women opposed to the extension of the Parliamentary franchise to women, are doing the right thing in the right way. They have formed an organisation already powerful through the position and ability of the leaders, and destined, we are sure, to be powerful also through the weight and numbers of those who oppose the misguided and anarchical members of their sex who cannot or will not realise that women are not men, and that women and men have functions as distinct in the social as in the physical world. The manifesto put forward by the Women's National Anti-Suffrage League is an admirable piece of work, worthy in every way of the cause and of the distinguished woman, Mrs. Hurophry Ward, who is reported to have drafted it. Its keynote is to be found in the last lines : "The women's suffrage movement can be defeated—it must be defeated— and by women themselves." That is the battle-cry of the League. The arguments by which it is supported are but an elaboration of two or three very simple facts. Women are women and men men. It is essential to the good governance of the State that there should be no possibility of a direct conflict between the two sexes in any matter of prime political importance. This being so, supreme political power must be given only to one sex. If only one sex is to be the depositary of ultimate power, that sex must be the male, owing to the fact that physical force rests with men, though numerical strength in the modern State belongs to women.

The women's manifesto is so admirably expressed that we cannot do better than quote from it freely. After stating that "it is time that the women who are opposed to the concession of the parliamentary franchise to women should make themselves fully and widely heard," it points out that "unless those who hold that the success of the women's suffrage movement would bring disaster upon England are prepared to take immediate and effective action, judgment may go by default, and our country drift towards a momentous revolution, both social and political, before it has realised the dangers involved." The mani- festo next deals, and deals most effectively, with the absurd argument which is so often accepted,—namely, that the concession of the franchise is inevitable, and that a claim of this kind, if only pressed vigorously enough, is sure to be granted. Those who take this view are aSked to consider the case of America. "A vigorous campaign in favour of women's suffrage has been carried on in the States for more than a generation. After forty years the American agitation has been practically defeated. The English agitation must be defeated, in the same way by the steady work and argument of women them- selves." To this we may add for ourselves that the " inevitable " argument is based upon a false analogy. Agitations for the spread of the franchise to men have no doubt hitherto always been successful, but this has been because they have in the last resort always been based on the possibility of an appeal to physical force. In a country like Britain, if you have a majority of the men unenfranchised, and they are determined to obtain the vote, and, further, are prepared to fight for it, the vote must be given to them, —unless, of course, the minority are for some reason or other in possession of greater physical force than the majority, and can hold them in servitude. But such a state of things is impossible in a country like Britain, and therefore the extension of the suffrage to the majority could only be a question of time,—was, in fact, inevitable. Now that the majority of British men have got the vote, and only a small minority remain unen- franchised, further enfranchisement, though it may he desirable, and though it may come, can in no sense be said to be inevitable. The unenfra,nchised minority has not the physical power, however much roused, to force obedience to its wishes. It is the same with female suffrage. The women do not possess the physical force which would ultimately enable them to compel an extension of the suffrage to themselves. No one will ever feel obliged to say, as the old landed oligarchy said in 1832, and as the middle classes said in 1868 :—" If we don't yield the suffrage to persuasion we shall be obliged later to yield it to force, and therefore we had better make the best terms we can rather than incur the terrible evils of revolution." There is nothing inevitable in politics unless superior force is on the side of those who demand a change. For example, the overthrow of the Monarchy in this country cannot be said to be inevitable, for there is not the slightest sign that the majority of the people want it, or are ever likely to want it, to be overthrown.

The main reasons why the League oppose the con- cession of the Parliamentary vote to women are set forth in seven sections. The first, the second, and the fourth are as follows:— " (a) Because the spheres of men and women, owing to natural causes, are essentially different, and therefore their share in the public management of the State should be different.

(b) Because the complex modern State depends for its very existence on naval and military power, diplomacy, finance, and the great mining, constructive, shipping and transport industries, in none of which can women take any practical part. Yet it is upon these matters, and the vast interests involved in them, that the work of Parliament largely turns (d) Because the influence of women in social causes will be diminished rather than increased by the possession of the parlia- mentary vote. At present they stand, in matters of social reform, apart froui and beyond party politics, and are listened to aceord- ingly. The legitimate influent% of women in politics—in all classes, rich and poor—will always be in proportion to their education and common sense. But the deciding power of the parliamentary vote should be left to men, whose physical force is ultimately responsible for the conduct of the State."

The fifth reason deals very cogently with the absurd suggestion that it is impossible to obtain certain reforms which affect women and children unless women have the vote. As the manifesto shows, the history of our legis- lation in the past completely negatives this proposition. "The channels of 'public opinion are always freely open to women." The sixth and sei,enth paragraphs of the reasons state that the League oppose totes for women on the following grounds :— " (f ) Because any measure for the enfranchisement of women unlit either (1) concede the vote to women on the same terms as to men, and thereby iri practice involve an Unjust and ittvidiottS litnitation ; or (2) by giving the *ate to wives of voters tend to the introduction of political differences into domestic life; or (3) by the adoption of adult suffrage, which seems the inevitable result of admitting the principle, place the female vote in an otrerpoWering Majority.

(4) Bemuse, finally, the danger which Might arise from the catieeserion of woman-suffrage, in the case of a. State burdened with such complex and far-reaching responsibilities as England, is out of all proportion to the risk run by those smaller com- munities which have adopted it. The admission to full political power of a number of voters debarred by nature and circumstance from the average political knowledge and experience open to men Would *eaken the central governing forces of the State, and be fraught with peril to the country. Women Who hold these views must now organise in their support."

We cannot leave the subject without expressing our strong hope that those of our readers, both women and men, but especially women, who are opposed to the policy of votes for women, will join the Wortten's National Anti- Suffrage League. The offices are at Caxton House, Tothill Street, Westminster, S.W. We may note also that Lady Jersey is the chairman of the League, that the vice-Chairman is Mrs. Massie, and the hon. secretary Miss Gertrude Lowthian Bell. The constitution of the League is rightly a very plain Mid short document, and we are glad VI learn that it places the whole of the direction of the movement, as it should be, in women's hands, and there- fere precludes the opperteets of the League from declaring, as they might otherwise have declared, that the movement is really a man's movement masquerading as a feininine agitation. But though men will have nothing to do with the direction of the League, they will be admitted as sub- scribing or affiliated members. The tortes under which members are admitted are as follows :—Members of the Council are to subscribe not less than ohe guinea. Members of the League will subscribe five shillings and upwards. Membership of branches of the League Will entail a subscriptioti of froth one shilling to five shillings. Branches, however, will be able to arrange fot the &Alec- tied of smaller subscriptions, and to enrol associates at their own discretion, subject to the approval Of the Central Executive. We sincerely hope that the able and energetic officers Wider whose direction the League begin their work will as soon as possible arrange for a quiet but thorough propagandist movement throughout the country. They should at once obtain a representative in ℓ, coti- stituency in the United Kingdom, and the first ditty of that representative should be to form a small Com- mittee. The first duty of that Committee should be to constitute a branch of the League. If this simple ideal is kept always before the eyes of the Executive Committee, they will soon find their organisation growing like a seow- ball. To make an organisation spread from the centre, "Devolution, devolution, and again devolution" must be the watchword; The work mutt be pushed back; and kick, and back until the central organisation finds it Ms nothing te do but to advise, supervise; control; and encourage: One word more. Though we hold that the formation of the League was absolutely necessary; and though we honotir those who have undertaken the Work, We cannot help feeling a deep regret that action should have been necessary. We realise what bitternets and friction are bound to be brought into many families owing to the conflict which must arise between the two women's organisatioes. Out of the double movement must come the very thing which we all desire to avoid,—the making of conflict, and especially political conflict, a part of iiionien's lives. It is, however, -better to have temporary conflict of that kind than to sow the seeds of a worst and petthanenb Conflict betwee±i nlen and i*Onien. Yet let es tieVer forget that Women were born notfest struggle and battle, but rather for what is "gentle, tranquil, true." Mari is a fighting animal, and is often the better for a fight. He is braced and improved by combat and by drinking delight of battle with his peers. With women it is just the reverse. Confliet, whether moral or physical, even When necessary, leaves traces on women that none can see without regret. The desire to lay low the foe written on • a man's fade it often a noble sight. It is a Sight from which both men and women instinctively desire to avert their eyed in the case of a Woman. Peace; serenity, kindlittess, helpfulness, are what the world looks for and reVerinicee iii the Woman.