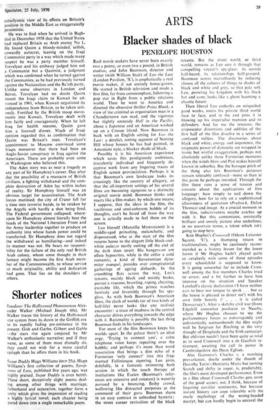 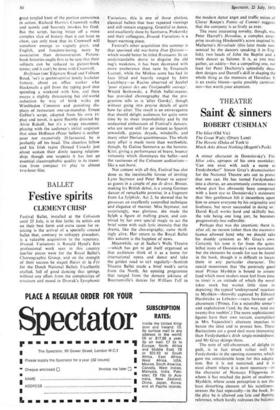 Real movie makers have never been exactly two a penny, or even two a pound, in British studios; and John Boorman, director and writer (with William Stair) of Leo the Last (London Pavilion, 'X'), is emphatically a real movie maker, if not entirely home-grown. He started in British television and made a first film, far from commonplace, following a pop star in flight from a public relations world. Then he went to America and directed the obsessive thriller Point Blank, a view of the criminal as organisation man in a Chandlertown run mad, and the vigorous but slightly unsteady Hell in the Pacific, about a Japanese and an American washed up on a Crusoe island. Now Boorman is back with an English setting for Leo the Last: a derelict, rotting segment of Notting Hill whose houses he has had painted, in Antonioni style, a blacker shade of black.

Possibly it is his American experience which saves this prodigiously ambitious, truculently individual and frequently de- ceptive work from any lingering traces of English screen provincialism. Perhaps it is that Boorman's own landscape looks in- creasingly like the country of allegory, so that the all-important settings of his several films are becoming signposts to a distinctly original movie mind. Boorman thinks and reacts like a film-maker; by which one means, I suppose, that the ideas in the film,, the vociferous and semi-coherent babble of its thoughts, can't be hived off from the way one is actually made to feel them on the screen.

Leo himself (Marcello Mastroianni) is a middle-aged princeling, melancholic, and dispossessed, who at the start of the film returns home to the elegant little black-and- white palazzo neatly cutting off the end of the dark slum street. His hangers-on are effete hypocrites, while in the cellar a cold romantic, a kind of Stevensonian dyna- miter manqug, presides over conspiratorial gatherings of ageing diehards. In the crumbling flats across the way, Leo's tenants, mainly black and mainly broke, pursue a raucous, brawling, raping, cheating, excitable life, which the prince watches furtively and feverishly through his spy- glass. As with both Boorman's American films, the clash of worlds (or of two kinds of half-life) never looks like any realistic encounter: a trace of madness in the central character drives everything towards the edge with it. Rationality is possibly the last thing Boorman finds in his landscapes.

For most of the film' Boorman keeps his worlds apart. In the palace there's an idiot orgy. 'Trying to connect you', a calm telephone voice keeps repeating over the babble; and perhaps it's more than word association that brings a dim echo of a Forsterian 'only connect' into this frag- mented Felliniesque capering. Leo joins, dolefully, in a fantastic swimming bath session in which the touch therapy of institutions like Esalen (Boorman's refer- ences are extensive and constant) is waterily pursued by a bouncing, fleshy crowd, wallowing like distracted porpoises at the command of their guru. Boorman slams in an easy contrast in unleashed hysteria : the street corner revivalism of the black

tenants. But the street world, or third world, remains as Leo sees it through that compelling voyeur's spy-glass: its sounds half-heard, its relationships half-grasped. Boorman scores marvellously by reducing almost all the colours of things to shades of black and white and grey, so that pale soft Leo, prowling his kingdom with his black hat and cane, looks like a ghost haunting a chaotic future.

Then liberal Leo embarks on misguided good works, meets his private third world face to face, and in the end joins it in blowing up his imperialist mansion and its defenders. And for me the tensions, the crepuscular distortions and oddities of the first half of the film dissolve in a series of confused mêlées. The discoveries about black and white, energy and impotence, the enigmatic power of dynamite are wrapped in ironic but wistful exaggeration, perhaps not absolutely unlike those Forsterian moments when the winds blow and Pan makes himself known in suburbia. But the baroque pitch of the thing also lets Boorman's purposes remain tolerably confused—more so than at this point he perhaps intended. Through the film there runs a sense of tension and concern about the applications of film language: how simply to nail down the allegory, how far to rely on a sophisticated allusiveness of quotation IPrufrock, Dylan Thomas) and image. At a crucial moment in the film, indecisiveness maybe catches up with it. But this contentious, erratically brilliant and unruly picture also underlines, in no uncertain terms, a talent which isn't going to stop-here.

Ken Hughes's Cromwell (Odeon Leicester Square, 'U'), a thumping return to traditionalism, might be cautiously recom- mended as a history lesson for the lower forms if Mr Hughes hadn't played quite so cavalierly with some of those episodes every schoolchild is supposed to know. It is going somewhat far to include Crom- well among the five members Charles tried to arrest; and a bit further to have him improve on the situation and Speaker Lenthall's classic declaration ('1 have neither ears to hear nor tongue to speak . . . but as the house is pleased to direct me') with his own little homily (` . . . it is called Democracy'). After a sketchy civil war (from Edgehill somewhat posthaste to Naseby, where Mr Hughes chooses to see the parliamentary forces as extravagantly and unhistorically outnumbered) the film might well be forgiven for flinching at the very thought of Drogheda and the Irish campaign. But oblivion needn't have been quite so total as to send Cromwell into a de Gaullish re- tirement, awaiting the call to power in Cambridgeshire des Deux Eglises.

Alec Guinness's Charles 1, a numbjng prevaricator, docile under the thumb of Dorothy Tutin's Henrietta Maria but turning Scotch and shifty in anger, is, predictably, the film's most developed performance. Even in a film about Cromwell Charles gets most of the good scenes; not. I think, because of lingering cavalier sentiments, but because instant history can cope tolerably with the ready mythology of the wrong-headed martyr, but can hardly begin to unravel the

great tangled knot of the puritan conscience in action. Richard Harris's Cromwell stalks and scowls and hoarsely invokes his God. But the script, having bitten off a more complex slice of history than it can hope to chew, can only trust that its Cromwell will somehow emerge as vaguely great, and English, and freedom-loving, more by association than demonstration. Picture- book histories ought first to be sure that their subjects can be reduced to picture-book terms; and it can't be done with Cromwell.

Hoffman (sac Edgware Road and Fulham Road, 'As') is quintessential lonely bachelor fantasy, about an office worker who blackmails a girl from the typing pool into spending a weekend with him, and then essays a slightly threatening but old-world seduction by way of brisk walks on Wimbledon Common and punishing dis- plays of restaurant one-up-manship. Ernest Gebler's script, adapted from his own 7'V play and novel, is quite fluently directed by Alvin Rakoff; but it's a wispy encounter, playing with the audience's initial suspicion that since Hoffman (Peter Sellers) is neither poor nor excessively ill-favoured, he is probably off his head. The cheerless fellow and his Irish typist (Sinead Cusack) just about sustain their dimly teasing relation- ship; though one suspects it has lost an essential claustrophobic quality in its transi- tion from compact TV play to almost two-hour film.