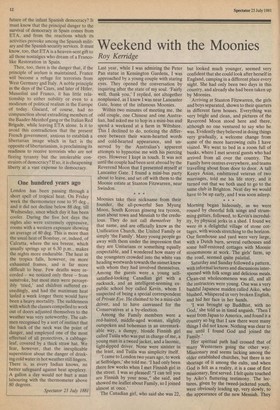 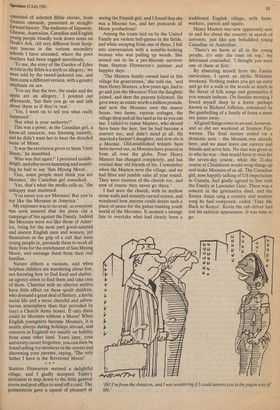 Weekend with the Moonies

Last year, while I was admiring the Peter Pan statue in Kensington Gardens, I was approached by a young couple with staring eyes. They opened the conversation by inquiring after the state of my soul. 'Fairly well, thank you,' I replied, not altogether nonplussed, as I knew I was near Lancaster Gate, home of the infamous Moonies.

Within two minutes of meeting me, the odd couple, one Chinese and one Australian, had asked me to hop in a mini-bus and spend a weekend at a farm in Wiltshire. This I declined to do, noticing the difference between their warm-hearted words and cold-hearted appearance, and unnerved by the Australian's apparent attempts to hypnotise me with his piercing eyes. However I kept in touch. It was not until the couple had been sent abroad by the Reverend Moon that I presented myself at Lancaster Gate. I found a mini-bus party about to leave, and set off with them to the Moonie estate at Stanton Fitzwarren, near Swindon.

Moonies take their nickname from their founder, the all-powerful Sun Myung Moon, South Korean ginseng tea tycoon, man about town and Messiah to the credulous. They do not call themselves by that name, and are officially know as the Unification Church, the United Family or simply 'the Family'. Many young people go away with them under the impression that they are Unitarians or something equally respectable, and I wondered how many of the youngsters crowded into the white van heading westwards towards the sunset knew with whom they had involved themselves. Among the guests were a young selfsatisfied-looking Canadian girl with a rucksack, and an intelligent-seeming expublic school boy called Kevin, whom I suspected of being a special correspondent of Private Eye. He claimed to be a mini-cab driver, and to have canvassed for the Conservatives at a by-election.

Among the Family members were a red-haired, middle-aged woman, slightly outspoken and bohemian in an unremarkable way, a dumpy, blonde Finnish girl called Tuiila who was put in charge of me, a young man in a tweed jacket, and a laconic, tight-lipped driver. None were sinister in the least, and Tuiila was simplicity itself.

'I came to London two years ago, to work at Selfridges,' she told me. 'I had only been ,there few weeks when I met Finnish girl in the street. I was so pleased! "I can tell you are Finnish by your nose," she said, and showed me leaflet about Family, so I joined almost at once.'

The Canadian girl, who said she was 22, but looked much younger, seemed very confident that she could look after herself in England, camping in a different place every night. She had only been two days in this country, and already she had been taken up by Moonies.

Arriving at Stanton Fitzwarren, the girls and boys separated, shown to their quarters in different farm houses. Everything was very bright and clean, and pictures of the Reverend Moon stood here and there, although no one ventured to say who he was. Evidently they believed in doing things very gradually, a welcome change from some of the more harrowing cults I have visited. We went to bed in a room full of bunks, where I met several guests who had arrived from all over the country. The Family have centres everywhere, and teams travelling about from door to door. A tall Kenya Asian, embittered veteran of two marriages, told me his life story, and it turned out that we both used to go to the same club in Brighton. Next day we would have to be up early, and I was soon asleep.

Morning began hideously, as we were roused by cheerful folk songs and strumming guitars, followed, to Kevin's incredulity, by physical jerks in a shed. I found we were in a delightful village of stone cottages, with woods stretching to the horizon. Our farmhouse and yard were very large, with a Dutch barn, several outhouses and some half-restored cottages with Moonie stonemasons at work. The girls' farm, up the road, seemed quite palatial.

Saturday and Sunday followed a pattern, with informal lectures and discussions inter' spersed with folk songs and delicious meals. Clean-cut wholesomeness was all, and all the instructors were young. One was a very bashful Japanese maiden called Aiko, who blushed, whispered in very broken English, and hid her face in her hands.

was brought up Buddhist, with no God,' she told us in timid anguish. 'Then I went from Japan to America, and found it a country so big that I saw there were many things I did not know. Nothing was clear to me until I found God and joined the Family.'

Her spiritual path had crossed that of many Westerners going the other way. Missionary zeal seems lacking among the older established churches, but there is no shortage of it among the cults, and when God is felt as a reality, it is a case of first missionary, first served. I felt quite touched by Aiko's fluttering testimony. The lectures, given by the tweed-jacketed youth, were obviously leading up, very slowly, to the appearance of the new Messiah. They consisted of selected Bible stories, from Genesis onwards, presented as straightforward history. The audience of Japanese, Chinese, Australian, Canadian and English Young people blandly took down notes on Noah's Ark. All very different from Scripture lessons in the various secondary schools I have attended, where the poor teachers had been ragged mercilessly.

'To me, the story of the Garden of Eden as told in the Bible is a myth or allegory,' we were told by the tweed-jacketed one, and then came a different version, with a greater emphasis on sex.

'You say that the tree, the snake and the apple are an allegory,' I pointed out afterwards, 'but then you go on and talk about them as if they're real.'

'Yes, I went on to tell you what really happened.'

'But what is your authority?'

This was a poser, as the Canadian girl, a know-all innocent, was listening intently, and he didn't want her to hear the dreaded name of Moon.

'It was the revelation given to Smm Ymm Mmm,' he mumbled.

'Who was that again?' I persisted maddeningly,and after more humming and mumbling he had to say 'Sun Myung Moon'.

'Gee, some people must think you are Moonies,' the Canadian girl remarked.

'Yes, that's what the media calls us,' the unhappy man muttered.

'You mean you are Moonies! But you're not like the Moonies in America.'

My exposure was to no avail, as everyone was soon assured that the press ran a campaign of lies against the Family. Indeed the Moonies were not like those of America, being for the most part good-natured and sincere English men and women, yet themselves in the grip of a cult that lures young people in, persuade them to work all their lives for the enrichment of Sun Myung Moon, and estrange them from their real families.

Nature abhors a vacuum, and when helpless children are wandering about lost, not knowing how to find food and shelter, an agency arises to find them and take care of them. Charities with no ulterior motive have little effect on these spoilt children, who demand a great deal of flattery, a hectic social life and a more cheerful and adven turous atmosphere than that provided by (say) a Church Army hostel. If only there could be Moonies without a Moon! When English youngsters become Moonies, it is nearly always during holidays abroad, and converts in England are usually on holiday from some other land. Years later, your university career forgotten, you can then be found selling toy monkeys in the streets and disowning your parents, saying, 'The only father I have is the Reverend Moon!'

Stanton Fitzwarren seemed a delightful village, and I gladly accepted Tuiila's invitation to step down to the little general stores and post office to send off a card. The postmistress gave a squeal of pleasure at seeing the Finnish girl, and I found that she was a Moonie too, and her postcards all Moon productions!

Among the treats laid on by the United Family are violent ball-games in the fields, and while escaping from one of these, I fell into conversation with a sensible-looking woman who was pulling up weeds. She turned out to be a pre-Moonie survivor from Stanton Fitzwarren's palmier and happier days.

'The Masters family owned land in this village for generations,' she told me, 'and then Henry Masters, a few years ago, had to go and join the Moonies! First the daughter joined, and then the parents followed. He gave away an estate worth a million pounds, and now the Moonies own the manor house, two farms, various cottages, the village shop and all the land as far as you can see. I talked to Jamie Masters, who should have been the heir, but he had become a convert too, and didn't mind at all. He married a farmer's daughter, and now she is a Moonie. Old-established tenants have been moved out, as Moonies have poured in from all over the globe. Poor Henry Masters has changed completely, and has evicted dear old friends of his. I remember when the Masters were the village, and we had fetes and jumble sales all year round. They were trustees of the church too, and now of course they never go there.'

I had seen the church, with its mellow stone walls and ornately carved screen, and wondered how anyone could desert such a place of peace for the guitar-bashing youth world of the Moonies. It seemed a strange fate to overtake what had clearly been a traditional English village, with farmworkers, parson and squire.

Henry Masters was now apparently sent to and fro about the country in search of converts, just like any befuddled young Canadian or Australian.

'There's no harm at all in the young people, it's only the ones on top,' my informant concluded. 'I thought you were one of them at first.'

By absenting myself from the Family curriculum, I spent an idyllic Wiltshire weekend. Nothing makes you get up early and go for a walk in the woods as much as the threat of folk songs and gymnastics if you remain indoors. On Sunday morning I found myself deep in a forest perhaps known to Richard Jefferies, entranced by the gambolling of a family of foxes a mere ten paces away.

All good things come to an end, however, and so did my weekend at Stanton Fitzwarren. The final lecture ended on a dramatic note — the Messiah was already here, and we must leave our careers and friends and serve him. No clue was given as to who he was — that would have to wait for the seven-day course, while the 21-day course at Chislehurst would wrap things up and make Moonies of us all. The Canadian girl, now happily talking of US imperialism in Canada, had gladly agreed to live with the Family at Lancaster Gate. There was a concert in the gymnastics shed, and the Kenya Asian sang a country and western song he had composed, called 'Take Me Back to Kenya'. Kevin the cab driver had lost his satirical appearance. It was time to go.