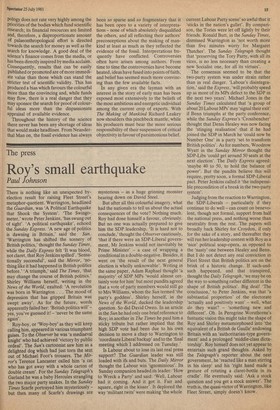 There is nothing like an unexpected byelection result for raising Fleet Street's metaphor-quotient. Warrington, headlined the Guardian, was 'A Political Earthquake that Shook the System'. 'The Swingometer,' wrote Peter Jenkins, 'has swung out of sight'. 'A political earthquake', echoed the Sunday Express. 'A new age of politics is dawning in Britain,' said the Sun. 'Warrington has shifted the scenery of British politics,' thought the Sunday Times, while the Daily Express felt 'It was blood, not claret, that Roy Jenkins spilled'. 'Sensationally successful', said the Mirror, 'nothing like it had happened in British politics before.' A triumph,' said The Times, 'that may change the course of British politics.' Shirley Williams herself, writing in the News of the World, exulted: 'A revolution was born in Warrington . . . The mood of depression that has gripped Britain was swept away'. As for the future, words apparently failed her: 'British politics will' — yes, you've guessed it! — 'never be the same again'.

Roy-boy, or 'Woy-boy' as they will keep calling him, appeared in various triumphant guises. To the Observer he was 'a mediaeval knight' who had achieved 'victory by public ordeal'. The Sun's cartoonist saw him as a delighted dog which had just torn the seat out of Michael Foot's trousers. The Mirror's Terence Lancaster called him 'a cat who has got away with a whole carton of double cream'. For the Sunday Telegraph's Garland he was a baby Hercules strangling the two major party snakes. In the Sunday Times Scarfe portrayed him mysteriously — but then many of Scarfe's drawings are mysterious — as a huge grinning monster bearing down on David Steel.

But after all this colourful imagery, what had the nationals to tell us about the actual consequences of the vote? Nothing much. Roy had done himself a favour, obviously. But no one was actually prepared to give him the SDP leadership. 'It is hard not to conclude,' thought the Observer cautiously, 'that if there were an SDP-Liberal government, Mr Jenkins would not inevitably be Prime Minister' — a case of wrapping a conditional in a double-negative. Besides, it went on 'the result of the next general election is wholly unknowable'. Writing in the same paper, Adam Raphael thought 'a majority' of SDP MPs 'would almost certainly vote for him' but most pundits agreed that a vote of party members would still go to Mrs Williams, whom the Sun termed 'the party's goddess'. Shirley herself, in the News of the World, ducked the leadership question. So did David Owen. In an article in the Sun he had only one brief reference to Roy; in another in The Times he paid him a sticky tribute but rather implied that the high SDP vote had been due to his own decision to move a chap to Warrington to 'coordinate Liberal backup' and to the 'final meeting which I addressed on Tuesday.'

Is Labour about to lose its last real press support? The Guardian leader was still loaded with ifs and buts. The Daily Mirror thought the Labour win 'ignominious'. Its Sunday companion headed its leader: 'How to Wreck a Party' and said: 'Well, Labour had it coming. And it got it. Fair and square, right in the kisser'. It deplored the way 'militant twits' were making 'the whole current Labour Party scene' so awful that it 'sticks in the nation's gullet'. By comparison, the Tories were let off lightly by their friends. Ronald Butt, in the Sunday Times, dismissed Warrington as 'not worth more than five minutes worry for Margaret Thatcher'. The Sunday Telegraph thought that 'preserving the Tory Party, with all its vices, is no less necessary than creating a new Socialist one, for all its virtues'.

The consensus seemed to be that the two-party system was under strain rather than in real danger. 'Labour's disintegration,' said the Express, 'will probably speed up as more of its MPs defect to the SDP in the next two years'. Michael Jones in the Sunday Times calculated that 'a group of about 20 Labour MPs' may 'signal their exit' if Benn triumphs at the party conference, while the Sunday Express's 'Crossbencher' thought that Denis Healey was now facing the 'stinging realisation' that if he had joined the SDP in March he 'could now be Number One' in a party 'set to transform British politics'. As for numbers, Woodrow Wyatt in the Sunday Mirror thought the SDP-Libs 'could get around 50 seats at the next election'. The Daily Express agreed: 'maybe 40 to 50, to hold the balance of power'. But the pundits believe this will require, pretty soon, a formal SDP-Liberal pact. Peter Jenkins called it 'the indispensible precondition of a break in the two-party system'.

Judging from the reaction to Warrington, the SDP-Liberals — particularly if they continue to do well — can count on benevolent, though not formal, support from half the national press, and nothing worse than neutrality from the rest. The papers will broadly back Shirley for Croydon, if only for the sake of a story. and thereafter they will run her leadership contest with Roy as a 'nice' political soap-opera, as opposed to the 'nasty' one between Healey and Benn. But I do not detect any real conviction in Fleet Street that British politics are on the brink of a historic change. If such-andsuch happened, and that transpired, thought the Daily Telegraph, 'we may be on the way to something rather different in the shape of British politics'. Big deal! 'The conclusion,' to Peter Jenkins, was that 'a substantial proportion' of the electorate 'actually and positively want' — well, what do they want? — 'something new and different'. Oh. In Peregrine Worsthorne's fantastic vision this might take the shape of Roy and Shirley metamorphosed into 'the equivalent of a British de Gaulle' endowing Britain with an 'authoritarian-type government' and a prolonged 'middle-class dictatorship'. Roy himself does not yet appear to entertain such grand thoughts. Asked by the Telegraph's reporter about the next government, he 'reacted like a man stirring in his sleep' and his 'right hand made a gesture of rotating a claret-bottle in its cradle'. He eventually said: 'Ask a stock question and you get a stock answer'. The truth is, the quasi-victor of Warrington, like Fleet Street, simply doesn't know.