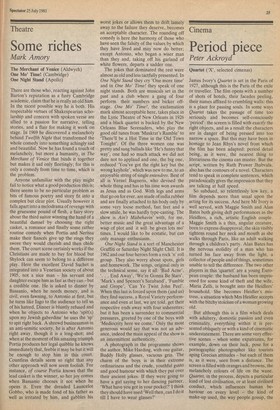 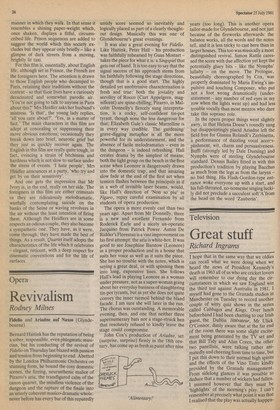 Quartet ('X', selected cimenas) James Ivory's Quartet is set in the Paris of 1927, although this is the Paris of the exile or traveller. The film opens with a number of shots of hotels, their facades peeling, their names affixed to crumbling walls: this is a place for passing souls. In some ways Quartet takes the passage of time too seriously and becomes self-consciously 'period': the screen is filled with exactly the right objects, and as a result the characters are in danger of being pressed into too narrow a space. But this may have been in homage to Jean Rhys's novel from which the film has been adapted: period detail being, as it were, the nearest thing to literariness the cinema can muster. But the script, written by Ruth Prawer Jhabvala, also has the contours of a novel. Characters tend to speak in complete sentences, which paradoxically gives the impression that they are talking at half speed.

So subdued, so relentlessly low key, a film depends more than usual upon the acting for its success. And here Mr Ivory is well served, with Maggie Smith and Alan Bates both giving deft performances as the Heidlers, a rich, artistic English couple. Maggie Smith is a thin, angular creature, born to express disapproval; the skin visibly tightens round her neck and mouth as she walks through Paris, like an adult walking through a children's party. Alan Bates has the nervous stolidity of a man who has turned his face away from the light, a collector of people and of things, sometimes unable to tell the difference. The two other players in this 'quartet' are a young European couple: the husband has been imprisoned for some kind of theft and the wife, Maria Zelli, is brought into the Heidlers' household. She becomes Heidler's mistress, a situation which Mrs Heidler accepts with the bitchy stoicism of a woman growing old.

But although this is a film which deals with adultery, domestic passion and even criminality, everything within it is presented obliquely or with a kind of cinematic understatement. There are some very effective scenes — when some expatriates, for example, down on their luck, pose for a pornographic photographer like tourists aping Grecian attitudes — but each of them is, as it were, seen from a distance. The screen is filled with oranges and browns, the melancholy colours of life on the wane. Quartet, in the process, depicts a particular kind of lost civilisation, or at least civilised conduct, which influences human behaviour on every level — the kind of make-up used, the way people gossip, the manner in which they walk. In that sense it resembles a shining paper-weight which, once shaken, displays a fitful, circumscribed life. Prison sequences are added to suggest the world which this society excludes but they appear only briefly like a glimpse of dark streets from a moving, brightly lit taxi.

For this film is. essentially, about English life; although set in France, the French are the foreigners here. The attention is drawn to those English people who decamped to Paris, retaining their traditions without the context so that their lives have a curiously deracinated and somewhat parodic air. 'You're not going to talk to anyone in Paris about this?' Mrs Heidler asks her husband's mistress. 'Is that', the young lady replies, 'all you care about?'. 'Yes, as a matter of fact.' The main characters in this film are adept at concealing or suppressing their move obvious emotions; occasionally they break down into brief, neurotic grief but they just as quickly recover again. The English in this film are really quite tough, in fact, evincing a strain of bitchiness and hardness which is not slow to surface under the stress of events. 'I hate people', Mrs Heidler announces at a party, 'who try and get by on their sensitivity'.

And one gets the impression that Mr Ivory is, in the end, really on her side. The foreigners in this film are either criminals or they are ridiculously melodramatic, wistfully contemplating suicide on the banks of the Seine or waving revolvers in the air without the least intention of firing them. Although the Heidlers are in some respects an odious couple, they also become a sympathetic one. They have, as it were, come through; they have made the best of things. As a result, Quartet itself adopts the characteristics of the life which it celebrates elegant, reticent, with a deep respect for cinematic conventions and for the life of surfaces.