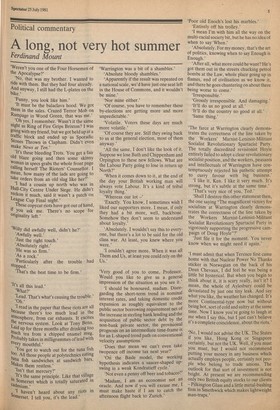 A long, not very hot summer

'Weren't you one of the Four Horsemen of the Apocalypse?' 'No, that was my brother. I wanted to ride with them. But they had four already. And anyway, I still had the L-plates on the bike.'

'Funny, you look like him.' 'It must be the balaclava hood. We got them in the sales. Crazed Terror Mob on Rampage in Wood Green, that was me.' 'Oh yes, I remember. Wasn't it the same night as Ring of Fire Grips Brixton? I was going with my friend, but we got held up at a traffic block and ended up as Sporadic Stones Thrown in Clapham. Didn't even make News at Ten.'

'It's these bleeding Trots. You get a fair old blaze going and then some skinny woman in specs grabs the whole front page calling herself The Rioters' Counsellor. I mean, how many of the lads are going to take orders from an old slag like her?' 'I had a cousin up north who was in Hull-City Centre Under Siege. He didn't reckon it much, said it wasn't a patch on League Cup Final night.' , These copycat riots have got out of hand, If you ask me. There's no scope for originality left.'

'Willy did awfully well, didn't he?' 'Awfully well.' 'Just the right touch.' 'Absolutely right.' He was so firm.'

'Particularly after the trouble had Stopped 'That's the best time to be firm.' 'It's all this lead.'

'I read in the paper that these riots are all because there's too much lead in the atmosphere, from car exhausts. It excites the nervous system. Look at Tony Benn. Laid up for three months after drinking too _Much tea from a chipped enamel mug. Probably takes in milligrammes of lead with every mouthful.'

You got to watch out for the tuna fish "30. All those people at polytechnics eating _una fish sandwiches at sandwich bars. Makes them restless.' Isn't that mercury?' , , It's the same principle. Like that village In Somerset which is totally saturated in cadmium., 11 haven't heard about any riots in 40nierset. I tell you, it's the lead.' 'Warrington was a bit of a shambles.'

'Apparently if the result was repeated on a national scale, we'd have just one seat left in the House of Commons, and it wouldn't be mine.'

'Of course, you have to remember these by-elections are getting more and more unpredictable.'

'Volatile. Voters these days are much more volatile.'

'Of course they are. Still they swing back to us at the general election, most of them anyw ay . '

'All the same, I don't like the look of it. Suppose we lose Bath and Chippenham and Orpington to these new fellows. What are the Labour Party going to lose in return up North?'

'When it comes down to it, at the end of the day your British working man will always vote Labour. It's a kind of tribal loyalty thing.'

'Whereas our lot —' 'Exactly. You know, I sometimes wish I liked our supporters more. I mean, if only they had a bit more, well, backbone. Somehow they don't seem to understand about loyalty.'

'Absolutely. I wouldn't say this to everyone, but there's a lot to be said for the old class war. At least, you knew where you were.'

'I couldn't agree more. When it was all Them and Us, at least you could rely on the Us.'

'Very good of you to come, Professor. Would you like to give us a general impression of the situation as you see it.'

'I should be honoured, madam. Disregarding the short-term trend in nominal interest rates, and taking domestic credit expansion as roughly equivalent to the public sector borrowing requirement net of the increase in sterling bank lending and the acquisition of public sector debt by the non-bank private sector, the provisional prognosis on an intermediate time-frame is for an L-shaped trend path on conventional velocity assumptions.' 'Does that mean we can't even take twopence off income tax next year?' 'On the Basle model, the working hypothesis indicates a saucer-shaped upswing in a weak Kondratieff cycle.' 'Not even a penny off beer and tobacco?'

'Madam, I am an economist not an oracle. And now if you will excuse me, I must make haste if I am to catch the afternoon flight back to Zurich.' 'Poor old Enoch's lost his marbles.' 'Entirely off his trolley.'

'I mean I'm with him all the way on the multi-racial society bit, but he has no idea of when to say When.'

'Absolutely. For my money, that's the art of politics, knowing when to say Enough is Enough.'

'After all, what more could he want? He's got them out in the streets chucking petrol bombs at the Law, whole place going up in flames, end of civilisation as we know it, and there he goes chuntering on about there being worse to come.'

'Grossly irresponsible. And damaging.' 'It'll do us no good at all.'

'The farce at Warrington clearly demonstrates the correctness of the line taken by the Workers' Marxist-Leninist-Militant Socialist Revolutionary Spartacist Party. The totally discredited revisionist Hoyle entirely failed to adopt a clear revolutionary socialist position, and the workers, peasants and intellectuals of Warrington have contemptuously rejected his pathetic attempt to curry favour with big business.'

'Shall I destroy this other statement then, the one saying "The magnificent victory for socialism at Warrington clearly demonstrates the correctness of the line taken by the Workers Marxist-Leninist-Militant Socialist Revolutionary Spartacist Party in vigorously supporting the progressive campaign of Doug Hoyle"?'

'Just file it for the moment. You never know when we might need it again.'

'I must admit that when Terence first came home with that Nuclear Power No Thanks sticker in Norwegian on the back of his Deux Chevaux, I did feel he was being a little bit hysterical. But when you begin to think about it, it is scary really, isn't it? I mean, the whole of Aylesbury could be devastated by just one tiny leak. And say what you like, the weather has changed. It's more Continental-type now but without being hot, sort of cold and sultry at the same time. Now I know you're going to laugh at me when I say this, but I just can't believe it's a complete coincidence, about the riots.'

`No, I would not advise the UK. The States if you like, Hong Kong or Singapore certainly, but not the UK. Well, if you must you must, but I would not recommend putting your money in any business which actually employs people, certainly not people who belong to trade unions. The outlook for that sort of investment is not bright. At present we are recommending only two British equity stocks to our clients — Pilkington Glass and a little metal-bashing firm in Smethwick which makes lightweight man-traps.'