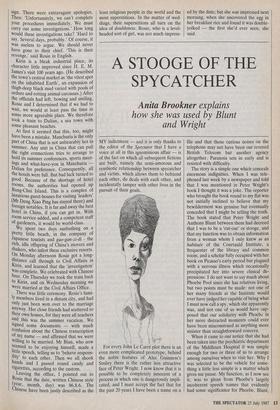 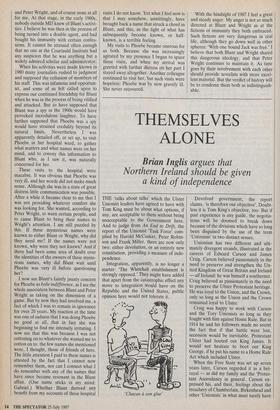 A STOOGE OF THE SPYCATCHER

how she was used by Blunt and Wright

MY indictment — and it is only thanks to the editor of the Spectator that I have a voice at all in this ignominious affair — is of the fact on which all subsequent fictions are built, namely the semi-amorous and symbiotic relationship between spycatcher and victim, which allows them to befriend each other, do deals with each other, and incidentally tamper with other lives in the pursuit of their goals.

For every John Le Cane plot there is an even more complicated prototype; behind the noble features of Alec Guinness's Smiley there is the rather less attractive face of Peter Wright. I now know that it is possible to be completely innocent of a process in which one is dangerously impli- cated, and I must accept the fact that for the past 20 years I have been a name on a file and that those curious noises on the telephone may not have been our revered British Telecom but another agency altogether. Paranoia sets in early and is resisted with difficulty.

The story is a simple one which conceals enormous indignities. When I was tele- phoned last week by a newspaper and told that I was mentioned in Peter Wright's book I thought it was a joke. The reporter who brought the book round to my flat was not initially inclined to believe that my bewilderment was genuine but eventually conceded that I might be telling the truth. The book stated that Peter Wright and Anthony Blunt between them had decreed that I was to be a `cut-out' or stooge, and that my function was to obtain information from a woman whom I only knew as an habituee of the Courtauld Institute, a frequenter of the library and common room, and a scholar fully occupied with her book on Picasso's early period but plagued with a nervous illness which occasionally precipitated her into severe clinical de- pressions. I do not want to say much about Phoebe Pool since she has relatives living, but two points must be made: not one of her many friends at the Institute would ever have judged her capable of being what I must now call a spy, which she apparently was, and not one of us would have sup- posed that our solidarity with Phoebo in her more distracted moments could ever have been misconstrued as anything more sinister than straightforward concern.

When it came to our notice that she had been taken into the psychiatric department of the Middlesex Hospital it was simple enough for two or three of us to arrange among ourselves when to visit her. Why I was selected to be the vehicle for some- thing a little less simple is a matter which gives me pause. My function, as I now see it, was to glean from Phoebe's largely incoherent speech names that evidently had some significance for Phoebe, Blunt, and Peter Wright, and of course none at all for me. At that stage, in the early 1960s, nobody outside MI5 knew of Blunt's activi- ties. I believe he was then in the process of being turned into a double agent, and had bought his immunity with certain confes- sions. It cannot be stressed often enough that no one at the Courtauld Institute had any suspicion that he was anything but a widely admired scholar and administrator.

When his activities were made known in 1980 many journalists rushed to judgment and supposed the collusion of members of his staff. This was infamous and opportun- ist, and some of us felt called upon to express our continued friendship for Blunt when he was in the process of being vilified and attacked. But to have supposed that Blunt was a spy in the 1960s would have provoked incredulous laughter. To have further supposed that Phoebe was a spy would have strained credulity beyond its natural limits. Nevertheless I was apparently detailed off, or set up, to visit Phoebe in her hospital ward, to gather what matters and what names were on her mind, and to convey this information to Blunt who, as I saw it, was naturally concerned for her.

These visits to the hospital were macabre. It was obvious that Phoebe was very ill, and her words did not make much sense. Although she was in a state of great distress little communication was possible. After a while it became clear to me that I was not providing whatever comfort she was looking for. She wanted, according to Peter Wright, to warn certain people, and to cause Blunt to bring their names to Wright's attention. I am still puzzled by this. If these mysterious names were known to either Blunt or Wright, why did they need me? If the names were not known, why were they not known? And if there had been some area of doubt over the identities of the owners of these myste- rious names, why did Blunt wait until Phoebe was very ill before questioning her?

I now see Blunt's faintly jaunty concern for Phoebe as belle indifference, as I see the whole association between Blunt and Peter Wright as taking on the dimension of a game. But by now they had involved me, a fact of which I was to remain in ignorance for over 20 years. My reaction at the time was one of sadness that I was doing Phoebe no good at all, that in fact she was beginning to find me intensely irritating. I now see that this was because I was not cottoning on to whatever she wanted me to cotton on to: the few names she mentioned were, I thought, those of friends of hers. The little attention I paid to these names is attested by the fact that I cannot now remember them, nor can I connect what I do remember with any of the names that have since became resonant in the Blunt affair. (One name sticks in my mind: Gabriel.) Whether Blunt- derived any benefit from my accounts of these hospital visits I do not know. Yet what I feel now is that I may somehow, unwittingly, have brought back a name that struck a chord in Blunt, and this, in the light of what has subsequently become known, or half- known, is a terrible feeling.

My visits to Phoebe became onerous for us both. Because she was increasingly agitated by my presence I began to space these visits, and when my arrival was greeted with further distress on her part I stayed away altogether. Another colleague continued to visit her, but such visits were hopeless: Phoebe was by now gravely ill. She never recovered. With the hindsight of 1987 I feel a great and steady anger. My anger is not so much directed at Blunt and Wright as at the fictions of immunity they both embraced. Such fictions are very dangerous in real life, although they go down well in other spheres: 'With one bound Jack was free.' I believe that both Blunt and Wright shared this dangerous ideology, and that Peter Wright continues to maintain it. As time goes by their involvement with each other should provide novelists with more excel- lent material. But the verdict of history will be to condemn them both as indistinguish- able.