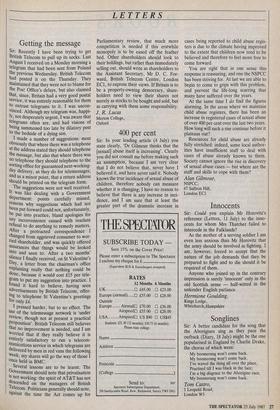 LETTERS Getting the message

Sir: Recently I have been trying to get British Telecom to pull up its socks. Last August I received on a Monday morning a telegram that had been sent from Poland the previous Wednesday. British Telecom had posted it on the Thursday. They maintained that they were not to blame for the Post Office's delays, but also claimed that, since, Britain had a very good postal service, it was entirely reasonable for them to entrust telegrams to it. I was uncon- vinced. Although my telegram was, happi- IY, not desperately urgent, I was aware that telegrams often are, and had visions of being summoned too late by dilatory post to the bedside of a dying son. I made a number of suggestions: most obviously that where there was a telephone at the address stated they should telephone the message, but also that where there was no telephone they should telephone to the sorting office for guaranteed next-working- day delivery, as they do for telemessages; and as a minor point, that a return address should be printed on the telegram form. The suggestions were not well received. It was like dealing with a Government department: points carefully missed, reasons why suggestions which had not been put forward could not, unfortunately, be put into practice, bland apologies for anY inconvenience caused with resolute refusal to do anything to remedy matters. After a protracted correspondence I changed from aggrieved consumer to wor- ried shareholder, and was quickly offered assurances that things would be looked into and seen to. After a two months' silence I finally received, on St Valentine's Day, a letter from the chairman's office explaining really that nothing could be done, because it would cost E15 per tele- gram to put my suggestion into practice. I found it hard to believe, having seen advertisements by British Telecom, offer- ing to telephone St Valentine's greetings for only £4. I pressed harder, but to no effect. The use of the telemessage network is `under review, though not at present a practical proposition'. British Telecom still believes that no improvement is needed, and I am worried that if they really believe it is entirely satisfactory to run a telecom- munications service in which telegrams are delivered by men in red vans the following week, my shares will go the way of those I °nee held in BMC.

Several lessons are to be learnt. The Government should note that privatisation IS not working: the spirit of AT&T has not descended on the managers of British Telecom. Politicians generally should note, against the time the Act comes up for Parliamentary review, that much more competition is needed if this erstwhile monopoly is to be eased off the feather bed. Other shareholders should look to their holdings, but rather than immediately selling out, should write as shareholders to the Assistant Secretary, Mr D. C. For- ward, British Telecom Centre, London EC1, to express their views. If Britain is to be a property-owning democracy, share- holders need to view their shares not merely as stocks to be bought and sold, but as carrying with them some responsibility. J. R. Lucas