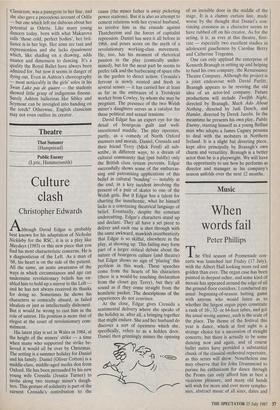 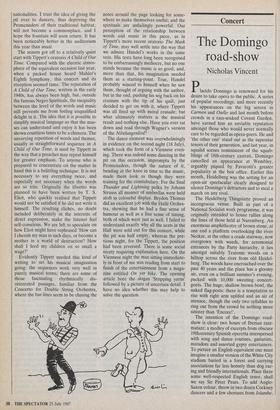 The 93rd season of Promenade con- certs was launched last Friday (17 July), with the Albert Hall looking more red and golden than ever. The organ case has been painted in deepest ochre, and some kind of mosaic has appeared around the edge of all the ground-floor corridors. I conducted my usual beginning-of-season betting game with anyone who would listen as to whether the largest organ pipes constitute a rank of 16-, 32- or 64-foot tubes, and got the usual wrong answer, such is the scale of the place. The theme of the festival this year is dance, which at first sight is a strange choice for a succession of straight concerts; but there is actually to be some dancing now and again, and of course ballet suites have provided a substantial chunk of the classical orchestral repertoire, as this series will show. Nonetheless one may observe that for John Drummond to pursue his enthusiasm for dance through the Proms can only afford him at best a vicarious pleasure, and many old hands will wish for more and ever more sympho- nies, abstract music of all sizes, dates and nationalities. I trust the idea of giving the pit over to dancers, thus depriving the Promenaders of their traditional habitat, will not become a commonplace, and I hope the fountain will soon return. It has been noticeably hotter in the auditorium this year than usual.

The season got off to a relatively quiet start with Tippett's oratorio A Child of Our Time. Compared with the electric atmos- phere of the equivalent occasion last year, when a packed house heard Mahler's Eighth Symphony, this concert and its reception seemed tame. The reputation of A Child of Our Time, written in the early 1940s, has always been high, but, outside the famous Negro Spirituals, the inequality between the level of the words and music still prevents me from feeling unqualified delight in it. The idea that it is possible to simplify musical language so that the mas- ses can understand and enjoy it has been shown countless times to be a chimera. The unvarying repetition of words and themes, usually in straightforward sequence in A Child of Our Time, is used by Tippett in the way that a preacher may repeat himself for greater emphasis. To anyone who is prepared to concentrate on the matter in hand this is a belittling technique. It is not necessary to say everything twice, and especially not necessary when the words are so trite. Originally the libretto was planned to have been written by T. S. Eliot, who quickly realised that Tippett would not be satisfied if he did not write it himself. The resulting clichés, no doubt included deliberately in the interests of direct expression, make the listener feel self-conscious. We are left to speculate on how Eliot might have rephrased 'How can I cherish my man in such days, or become a mother in a world of destruction? How shall I feed my children on so small a wage?'

Evidently Tippett needed this kind of writing to set his musical imagination going: the sequences work very well in purely musical terms; there are some of those fascinating rhythmically dis- orientated passages, familiar from the Concerto for Double String Orchestra, where the bar-lines seem to be chasing the notes around the page looking for some- where to make themselves useful; and the spirituals are unfailingly powerful. Our perception of the relationship between words and music in this piece, as in Tippett's more recent oratorio The Mask of Time, may well settle into the way that we admire Handel's works in the same vein. His texts have long been recognised to be embarrassingly mediocre, but no one minds because the music is so good, and, more than that, his imagination needed them as a starting-point. True, Handel probably winced to himself when he saw them, thought of arguing with the author, but in the end, pushing his wig back on his cranium with the tip of his quill, just decided to get on with it, where Tippett was all fired up with moral crusade; but what ultimately matters is the musical result and nothing else. Have you ever sat down and read through Wagner's version of the Nibelungenlied?

The dance element was overwhelmingly in evidence on the second night (18 July), which took the form of a Viennese even- ing. There was indeed some dancing in the pit on this occasion, impromptu by the Promenaders, though the nature of it, bending at the knee in time to the music, made them look as though they were training for the constabulary. For the final Thunder and Lightning polka by Johann Strauss all manner of umbrellas were held aloft in colourful display. Brydon Thomas did an excellent job with the Halle Orches- tra, showing that he had a fine sense of humour as well as a fine sense of timing, both of which were just as well. I failed to understand exactly why all the seats in the Hall were sold out for this concert, while the pit was half empty, whereas the pre- vious night, for the Tippett, the position had been reversed. There is some social nicety requiring explanation here. On the Viennese night the man sitting immediate- ly in front of me was reading from start to finish of the entertainment from a maga- zine entitled On yer bike. The opening article bore the slogan 'Stripping yarns' followed by a picture of uncertain detail. I have no idea whether this may help to solve the question.