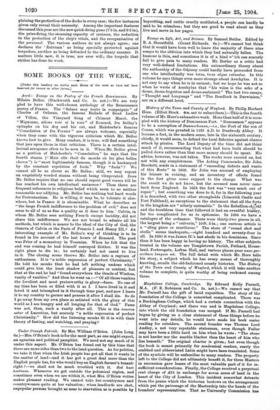 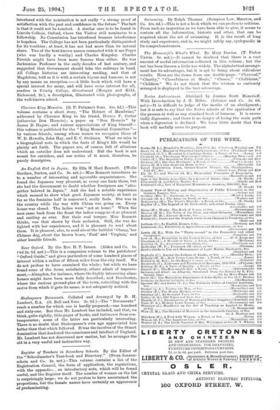 Robinson and Co. 55. net.)—We cannot say that Mr. Purnell has the gift of lucid exposition. The story of the foundation of the College is somewhat complicated. There was a Buckingham College, which had a certain connection with the Abbey of Croyland ; and there was and is Magdalene College, into which the old foundation was merged. If Mr. Purnell had begun by giving us a clear statement of these things before he went into any details, he would have made his book easier reading for outsiders. The second founder was Thomas Lord Audley, a not very reputable statesman, even though Fuller may have been a little hard on him when he wrote : "The stone is not harder nor the marble blacker than the heart of him who lies beneath." The original charter is given; but even though the book is meant primarily for academical readers, surely the crabbed and abbreviated Latin might have been translated. Some of the symbols will be unfamiliar to many readers. The property left to the College did not ultimately benefit it, for three Masters in succession gave leases of the most valuable part of it for in- sufficient considerations. Finally, the College received a perpetual rent charge of £15 in exchange for seven acres of land in the heart of the City of London. This incident somewhat detracts from the praise which the historian bestows on the arrangement which put the patronage of the Mastership into the hands of the founders' representatives. That no University Commission has interfered with the nomination is not really "a strong proof of satisfaction with the past and confidence in the future." The fact is that.it could not be touched. A similar case is to be found in Lincoln College, Oxford, where the Visitor still nominates to a fellowship. No Commission has interfered because interference is hopeless. The College has not been particularly distinguished for its worthies ; at least, it has not had more than its natural share. Two of the best-known names connected with it are Pepys (who was hardly a worthy) and Charles Kingsley. Charles Fa:rrish might have been more famous than either. He was Jacksonian Professor in the early decades of last century, and suggested that Government should take the railways in hand. All College histories are interesting reading, and that of Magdalene, told as it is with a certain vigour and humour, is not by any means an exception.—A little book which will have a special interest for many, and will have some interest for all, readers is Trinity College, Glenalmond (Morgan and Kidd, Richmond, 2s.), a description, illustrated with photographs, of the well-known school.