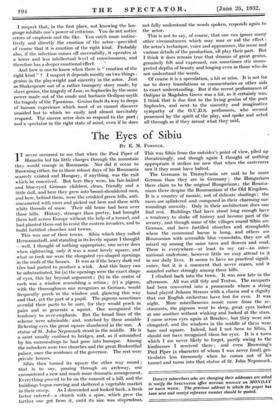 The Eyes of Sibiu

iT never occurred to me that when the Pied Piper of Hamelin led his little charges through the mountain they would emerge in Roumania. Nor did it occur to Browning either, for in those robust days of his Roumania scarcely existed and Hungary, if anything, was the exit which he conceived. But here they were, his fair-haired and blue-eyed German children, clean, friendly and a little dull, and here they grew into broad-shouldered men, and here, behind them, were the crinkled green hills, anti- macassered with trees and picked out here and there with white threads of snow. Their old home had been over those hills. History, stranger than poetry, had brought them half across Europe without the help of a tunnel, and had planted them out to resist the eastern invaders, and to build fortified churches and towns.

This was one of their towns. Sibiu which they called Hermannstadt, and standing in its lovely square I thought —well, I thought of nothing appropriate, one never does when sightseeing, only it was a most lovely square, and what so took me were the elongated eye-shaped openings in the roofs of the houses. It was as if the heavy dark red tiles had parted to produce a wink. And this fancy can be substantiated, for (a) the openings were the exact shape of eyes, this lay beyond argument ; (b) in the centre of each was a window resembling a retina ; (c) a pigeon, with the thoroughness one recognizes as German, would frequently perch in the window and, glancing this way and that, act the part of a pupil. The pigeons sometimes overdid their parts to be sure, for they would perch in pairs and so generate a squint. One recognized the tendency to over-emphasis. But the broad lines of the scheme were admirable, and, watched by these amiable flickering eyes the great square slumbered in the sun'. A statue of St. John Nepomuck stood in the middle- He is a saint usually confined to bridges, and, as if astonished by his surroundings he had gone into baroque. Among the onlookers were two churches and the great Brukenthal palace, once the residence of the governor. The rest were private houses.

Sibiu then turned its square the other way round ; that is to say, passing through an archway; one encountered a new and much more dramatic arrangement. Everything proved to be on the summit of a hill, and the buildings began curving and sheltered a vegetable market in their sweep. As I descended and looked back, a fresh factor entered—a church with a spire, which grew the farther one got from it, until its size was stupendous.

This was Sibiu from the outsider's point of view, piled up threateningly, and though again I thought of nothing appropriate it strikes me now that when the easterners saw it they must have halted.

The Germans in Transylvania are said to be more German than they are in Germany ; the Hungarians there claim to be the original Hungarians ; the Rouma- nians there despise the Roumanians of the Old Kingdom. It is a country of mosaic, not of delicate shadings ; the races are splintered and composed in their charming sur- roundings uneasily. Only in their architecture does one find rest. Buildings that have stood long enough have a tendency to shake off history and become part of the scenery, and though some of the villages round Sibiu are German, and have fortified churches and strongholds where the communal bacon is hung, and others are Roumanian with accessible blue verandahs, they arc all mixed up among the same trees and flowers and mud. There is everywhere—at least to my ear—an inter- national undertone, however little we may attend to it in our daily lives. It seems to have no practical signifi- cance, but it is a comment that never ceases, and it sounded rather strongly among these hills.

I climbed ba,ck into the town. It was now late in the afternoon. All was still tidy and Teuton. The ramparts had been converted into a promenade where a string band played Johann Strauss with a charm and a dignity that our English orchestras have lost for ever. It was night. More- miscellaneous music came from the re- staurants, the pigeons went to sleep, great eyes looked at one another without winking and looked at the stars. I came across eyes again at Brashov, but they were not elongated, and the windows in the middle of them were bare and square. Indeed, had I not been to Sibiu, I shOuld not have recognized them for eyes. It is a town which I am never likely to forget, partly owing to the kindnesses I received there ; and even Browning's Pied Piper (a-character of whom I was never fond) ges- ticulates less tiresomely when he comes out of his tunnel and turns into that statue of St. John Nepomuck.