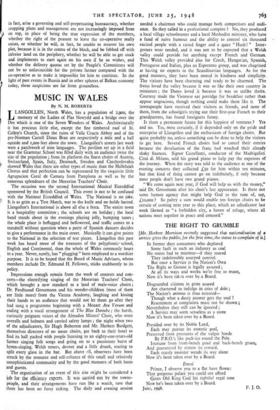 THE RIGHT TO GRUMBLE [Mr. Herbert Morrison recently suggested that

service gives the public, for the first time, the status to complain of it.] IN former days consumers who deplored Some fault in such an industry as coal No status had to murmur—if they roared They indefensibly usurped control.

But once a Service is the Nation's Own The Right to Grouse is legally assured ; At all its ways and works we're free to moan, Now it's been taken over by a Board.

Disgruntled citizens in grim acoord Are chartered to indulge in cries of dole ;

The Nation's animus is thus restored—

Though what a dusty answer gets the soul Resentment at complaints must not be shown ; Nevertheless they still can be ignored ; A Service may seem senseless as a stone Now it's been taken over by a Board.

Presided over by its Noble Lord, Each may pursue its esoteric goal, Preserved from pressures of the vulgar horde By P.R.O.'s like pack-ice round the Pole. Immune from front-bench goad and back-bench groan, And guaranteed by statute its reward, Each stately monster wends its way alone Now it's been taken over by a Board.

Envoi Prince, I observe you to a flat have flown: That gorgeous palace you could not afford

Gives Old King Coal his rightful regal tone Now he's been taken over by a Board.