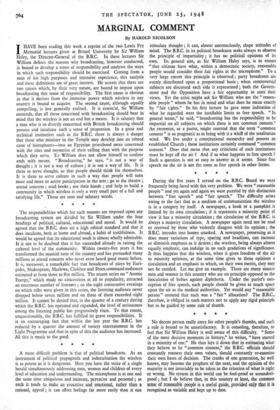 IHAVE been reading this week a reprint of the two Lewis Fry 1 Memorial lectures given at Bristol University by Sir William Haley, the Director-General of the B.B.C. In these lectures Sir William defines the reasons why broadcasting, however conducted, is bound to develop a sense of responsibility and analyses the ways in which such responsibility should be exercised. Coming from a man of his high purposes and intensive experience, this analysis and these definitions are of great interest. He asserts that there are two causes which, by their very nature, are bound to impose upon broadcasting this sense of responsibility. The first cause is obvious in that it derives from the immense power which wireless in any country is bound to acquire. The second cause, although equally compelling, is less generally realised. It is essential, Sir William contends, that all those concerned with broadcasting should bear in mind that the wireless is not an end but a means. It is salutary that a man who is so directly concerned with British broadcasting should possess and inculcate such a sense of proportion. In a great and technical institution such as the B.B.C. there is always a danger that those who minister in the Temple may develop into an inbred caste of hierophants—into an Egyptian priesthood more concerned with the rites and mysteries of their calling than with the purpose which they serve. S:r William does not allow himself to confuse ends with means. " Broadcasting," he says, " is not a way of thought ; it is not a way of culture ; it is not a way of life. It is there to serve thought, so that people should think for themselves. It is there to serve culture in such a way that people will turn more and more to active participation in the arts ; go to the theatre ; attend concerts ; read books ; use their hands ; and help to build a community in which wireless is only a very small part of a full and satisfying life." Those are sane and salutary words.

The responsibilities which for such reasons are imposed upon any broadcasting system are divided by Sir William under the four headings of political, cultural, educational and moral. It would be agreed that the B.B.C. does set a high ethical standard and that it does inculcate, both at home and abroad, a habit of truthfulness. It would be agreed that its educational work is almost wholly admirable. It is not to be doubted that it has succeeded already in raising the cultural level of the community. Within twenty-five years it has transformed the musical taste of the country and has persuaded many millions to attend concerts who never even heard good music before. It is, moreover, a remarkable fact that broadcasts of plays by Euri- pides, Shakespeare, Marlowe, Chekhov and Ibsen command audiences estimated at from three to five million. The recent series on " Atomic Energy," which made no concessions at all to popularity, attracted an enormous number of listeners ; on the eight consecutive evenings on which talks were given in this series, the listening audience never dropped below seven million and on three of them exceeded eight million. It cannot be denied that, in the quarter of a century during which the B.B.C. has operated and expanded, the level of seriousness among the listening public has progressively risen. To that extent, unquestionably, the B.B.C. has fulfilled its grave responsibilities. It is an encouraging fact that within the last year the B.B.C. has reduced by a quarter the amount of variety entertainment in the Light Programme and that in spite of this the audience has increased. All this is much to the good.

A more difficult problem is that of political broadcasts. As an instrument of political propaganda and indoctrination the wireless is as potent as it is dangerous. Here you have the voice of a single herald simultaneously addressing men, women and children of every level of education and understanding. The microphone is at one and the same time ubiquitous and intimate, pervasive and personal ; as such it tends to make an evocative and emotional, rather than a rational, appeal ; it can affect feelings far more easily than it can stimulate thought ; it can, almost unconsciously, shape attitudes of mind. The B.B.C. in its political broadcasts seeks always to observe the principle of impartiality ; it has no political opinions of its own. Its general aim, as Sir William Haley says, is to ensure " that citizens have what, within a democratic society, reasonable people would consider their fair rights at the microphone." To a very large extent this principle is observed ; party broadcasts are evenly. distributed upon a proportional basis ; when controversial subjects are discussed each side is represented ; both the Govern- ment and the Opposition have a fair opportunity to state their views. Yet the critic might ask Sir William who are the " reason- able people " whom he has in mind and what does he mean exactly by " fair rights." In his first lecture he gave some indication of what he regarded were the justifiable limits to free speech. " In general terms," he said, " broadcasting has the responsibility to be impartial on all subjects on which there is not common consent." An extremist, or a purist, might contend that the term "common consent " is so pragmatic as to bring with it a whiff of the totalitarian wind. We live under a constitutional monarchy and possess an established Church ; these institutions certainly command " common consent." Does that mean that any criticisms of such institutions must be kept off the air ? And if so what happens to free speech ? Such a question is not as easy to answer as it seems. Since free speech on the air is not the same as free speech in other forms.

During the five years I served on the B.B.C. Board we were frequently being faced with this very problem. We were "reasonable people " and yet again and again we were puzzled by this distinction between " free speech " and " fair speech." The difficulty arises owing to the fact that as a medium of communication the wireless is in a category by itself. A newspaper, a book or a pamphlet is limited by its own circulation ; if it represents a minority point of view it has a minority circulation ; the circulation of the B.B.C. is always a majority circulation. A newspaper again need not be read or received by those who violently disagree with its opinion ; the B.B.C. intrudes into homes unasked. A newspaper, possessing as it does many variations of type, spacing and headlines, can increase or diminish emphasis as it desires ; the wireless, being always almost equally emphatic, can indulge in no such gradations of significance. It thus happens that the wireless, when it gives freedom of the air to minority opinions, at the same time gives to those opinions a circulation and an emphasis to which, on their own merits, they may not be entitled. Let me give an example. There are many sincere men and women in this country who are on principle opposed to the inoculation of babies against diphtheria. Under the purist's con- ception of free speech, such people should be given as much space upon the air as the medical authorities. Yet would any " reasonable person" contend that such was a " fair " allocation? The B.B.C., therefore, is obliged in such matters not to apply any rigid principle but to be guided by some rule of thumb.

No decent person really cares for other people's thumbs, and such a rule is bound to be unsatisfactory. It is consoling, therefore, to feel that Sir William Haley is well aware of this difficulty. " Some of the most decisive moments in history," he writes, "have started in a minority of one." He thus lays it down that in estimating what they believe to be " common consent," the B.B.C. officials should constantly reassess their own values, should constantly re-examine their own bases of decision. The cranks of one generation, he well knows, may become the prophets of the next, and the opinion of the majority is not invariably to be taken as the criterion of what is right or wrong. No system in this world can be fool-proof or scoundrel- proof ; but I do believe that, in this country at least, the common sense of reasonable people is a useful guide, provided only that it is recognised as variable and kept up to date.