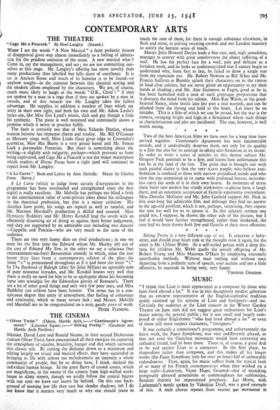 " Oliver Twist." (Odeon, Marble Arch.)—" Gentleman's Agree- ment" (Leicester Square.)—" Sitting Pretty." (Gaumont and Marble Arch Pavilion.) MESSRS. David Lean and Ronald Neame, in their second Dickensian venture Oliver Twist, have concentrated all their energies on capturing the atmosphere of squalor, brutality, hunger and dirt which surround this classic tale. By cutting the dialogue down to a minimum and relying largely on visual and musical effects, they have succeeded in bringing to life with almost too melodramatic an intensity a whole community • of people, but by so doing have, I think, mislaid the individual human beings. In the great flurry of crowd scenes, which are magnificent, in the sweep of the camera from high-walled work- house to slimy streets, though we avidly follow the central figures with our eyes we leave our hearts far behind. On this vast back- ground of teeming low life they cast but slender shadows, yet I do not know that it matters very much or why one should yearn to

touch the core of them, for there is enough substance elsewhere, in flesh and stone, in pulsing sweating crowds and wet London masonry to satisfy the keenest sense of touch.

Master John Howard Davies leads a fine cast, and, nigh speechless, manages to convey with great sensitiveness the abject suffering of a waif. He has the perfect face for a waif, pale ?nd delicate as a forsaken moth, and he looks so undernourished that I cannot begin to understand why, from first to last, he failed to draw Si single tear from my expectant eye. Mr. Robert Newton as Bill t kes and Mr. Francis Sullivan as Bumble splash their characters on to the canvas in loud clear colours, but are never given an opportunity to try their hands at shading ; and Mr. Alec Guinness as Fagin, good as he is, has been furnished with a nose of such grotesque proportions that it distracts the mind from his talents. Miss Kay Walsh, as the good- hearted Nancy, alone instils into her part a real warmth, and can be plucked from the throng and held to the heart. Let there be no mistake. This.is a film of which we can be proud, but the star is the camera, swinging bright and high .in a firmament where such things as characterisation and plot are incidental. The star, however, is well worth seeing.

Two of the best American films we have seen for a long time have arrived together. Gentleman's Agreement has won innumerable awards, and it undoubtedly deserves them, not only for its quality as a film but also for its courage in taking anti-Semitism as its theme. In order to write a series of articles on this thorny subject Mr. Gregory Peck pretends to be a Jew, and learns how unfortunate this can be in the land of the free. The point that is brought out with such painful clarity is that the very nicest people, who believe anti- Semitism is confined to those with narrow prejudiced. minds and who view the sins committed in its name with profound horror, neverthe- less carry the seeds of it in their own hearts. In moments of stress these burst into modest but sturdy stinkworts—a phrase here, a laugh there, and an automatic acceptance of Gentile superiority everywhere. Miss Dorothy McGuire and Mr. John Garfield support Mr. Peck in this over-long but admirable film, and although they find no answer to the age-old problem, which is not, perhaps, surprising, they expose the sore too well for us to ignore it. In this salutary sermon one could not, I suppose, be shown the other side of the picture, but I feel it would have further strengthened, rather than weakened, the case had we been shown both Jew and Gentile at their most offensive.

Sitting Pretty is a very different cup of tea. It concerns a baby- sitter, and should your heart sink at the thought raise it again, for the sitter is Mr. Clifton Webb. As a self-styled genius with a deep dis- taste for children Mr. Webb quells the unruly offspring of Mr. Robert Young and Miss Maureen O'Hara by employing extremely unorthodox methods. Without once smiling and without once departing from a pedantic turn of speech, ever austere and not a little offensive, he succeeds in being very, very funny.