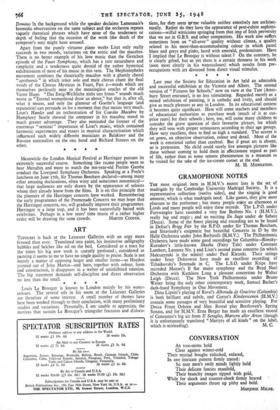 ToPoLsici is back at the Leicester Galleries with an orgy more fevered than ever. Translated into paint, his instinctive calligraphy bubbles and belches like oil on the boil. Considered as a tract for the times his big new work is scarcely profound ; considered as painting it seems to me to have no single quality to praise. Scale is not merely a matter of opposing larger and smaller forms—as Haydon pointed out of John Martin—and here, together with colour, form and construction, it disappears in a welter of uninhibited emotion. The big statement demands self-discipline and direct observation no less than the small.

* * * * Louis Le Brocquy is known to London mainly by his water- colours. The several oils in his room at the Leicester Galleries are therefore of some interest. A small number of themes have here been worked through to their conclusion, with many preliminary studies and variations. Personally, I am unable to appreciate the motives that sustain Le Brocquy's triangular fractures and disloca-

tions, for they seem t'me valuable neither emotively nor architec- turally. Rather do they have the appearance of post-cubist sophisti- cations—wilful witticisms springing from that imp of Irish perversity that we see in G.B.S. and other compatriots. His work also suffers sometimes from an " all-over " quality without climax, a quality related to his more-than-accommodating colour in which pastel blues and greys and pinks, laced with emerald, predominate. Have I implied that Le Brocquy is without talent ? On the contrary, he is clearly gifted, but as yet there is a certain thinness in his work (seen most clearly in his watercolours) which results from pre- occupations with art divorced from direct visual stimulus.

* * * * Last year the Society for Education in Art held an admirable and successful exhibition at the Victoria and Albert. The second version of " Pictures for Schools," now on view at the Tate (Atter- bury Street entrance), is no less stimulating. Regarded merely as a mixed exhibition of painting, it is catholic and lively, and should give as much pleasure as any in London. In its educational context it becomes quite significant. Here will come teachers and members of educational authorities to purchase work (much of it at cut- price rates) for their schools ; here, too, will come many children to consider the grave question of their favourite picture, for which they will vote with proper seriousness according to their age groups. How very excellent, then to find so high a standard. The accent is on genre, on objective observation, colour and detail. Most of the work is emotional rather than cerebral. But if great art is absent, so is pretension. No child could surely live amongst pictures like these without coming to hold them in affectionate regard as part of life, rather than as some remote phenomenon in a museum to be visited for the sake of the ice-cream comet at the end.