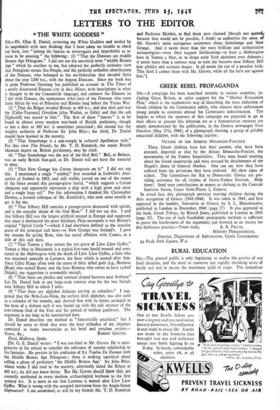 SIR,—A campaign has been launched recently in various countries, in- cluding Great Britain, to enlist support for the " Markos Evacuation Plan," which is the euphemistic way of describing the mass abduction of Greek children by the Communist rebels, who remove these unfortunate young people to countries abroad for Communist indoctrination. The lengths to which the sponsors of this campaign are prepared to go in their efforts to present this inhuman act as a humanitarian measure are amply demonstrated by the publication, in the Geneva newspaper Voix Ouvriere (May 27th, 1948), of a photograph showing a group of pitiably emaciated children, with the following caption: VICTIMS OF THE ATHENS MONARCHO-FASCISTS These Greek children have lost their parents, who have been arrested, deported or shot by the Athens Monarcho-Fascists, the mercenaries of the Yankee Imperialists. They were found roaming about the Greek countryside and were rescued by detachments of the People's Army of General Markos. One can see how they have suffered from the privations they have endured. All show signs of rickets. The Committees for Aid to Democratic Greece are pro- viding assistance for all victims of Greco-Yankee Fascism. Help them! Send your contributions in money or clothing to the Centrale Sanitaire Suisse, Cours Saint-Pierre 2, Geneva.

In actual fact, this photograph portrays starving children during the Axis occupation of Greece (1941-1944). It was taken in 1943, and first appeared in the booklet, Starvation in Greece, by S. L. Hourmouzios, published in London in December, 1943 (page 27). It also appeared in the book, Greek Trilogy, by Byford Jones, published in London in 1945 (page 33). The use of such fraudulent propaganda methods is sufficient to prove the baselessness of the arguments put forward as an excuse for this barbarous practice.—Yours truly, A. A. PALLIS,